Ivan, Jennifer and I had lunch at Pasta de Waraku on May 2, 2009.  It’s a Japanese casual pasta and cafe restaurant.  We’ve never heard of any restaurant like that.  Ivan had a salmon hot pot while Jennifer ordered a chicken and egg noodle soup. 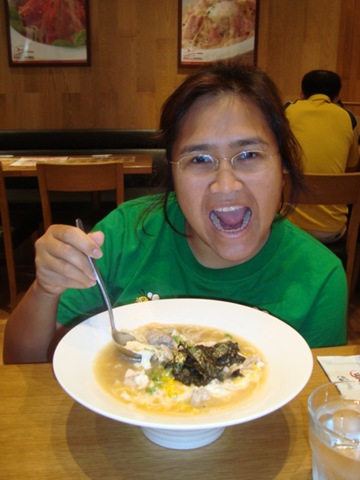 I had pasta dish with pesto, chicken and bananas.  The food was really good.

We went shopping on Bugis Street.  There’s a mall there and also a market right nearby.  Ivan bought some t-shirts.  Jennifer’s feet hurt.  We took a taxi back to the hotel.

We got ready for dinner.  Tonight, we’d be checking out Supperclub for dinner.  They offer a four-course surprise menu for S$65 per person.  Ivan has been to the Amsterdam Supperclub.  He thought it was really good.  He remembers that the food came out about every 30 minutes.

Ivan made a reservation for 8 pm.  He said it doesn’t matter since they start serving at 9 pm.  We got to the restaurant around 8:30 pm. 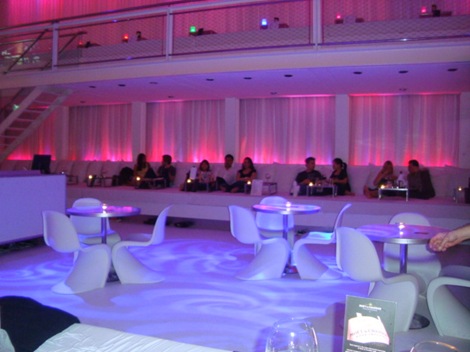 We were seated on the beds.  You sit on a big cushion and pillows are behind you.  A server came a few minutes later.  She asked us if we had any dietary restrictions.  Ivan and Jennifer said they eat chicken, but no pork or beef.  I said I eat chicken, vegetables and bananas.  I put an emphasis on bananas.  We heard the next table that somebody didn’t like cheese.  Ivan and Jennifer couldn’t understand that since they both love cheese.  But, everybody has different tastes.

There was good music playing.  An extra dish came out.  It was just a little sampling.

The first course came out at 9 pm. 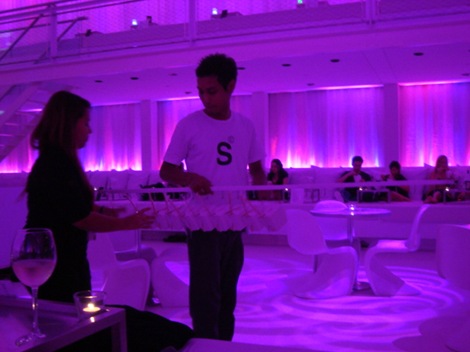 The dishes were being served in Chinese take-out boxes.  Ivan and Jennifer got fish nuggets with noodles.  My dish was fried bananas with noodles.  It was actually big for a starter and tasted real good.

Ivan and Jennifer received split pea soup served in an old fashioned jar container.  I got banana soup.  It tasted yummy.  There was an old woman walking around who stole a man’s split pea soup.  I think it was part of the performance.

The next dish came about 9:45 pm.  Ivan and Jennifer got a sea bass with vegetables and mashed potatoes.  The mashed potates had small cubes of carrots mixed in.

Jennifer said the sea bass melted in her mouth – it didn’t taste fishy at all.  Ivan and Jennifer both thought the dish was excellent.  My dish was banana stuffed chicken with vegetables and mashed potatoes.  The chicken was delicious!!  This was definitely my favorite dish.

There was performance before the last course.  It was the old woman from before.  She wheeled out a garbage can.  She was taking people’s empty dishes and putting it into the garbage.  Then, she went inside the garbage bag.  She appeared as a young woman in a red dress.  The DJ started playing Gloria Estefan.  The woman had a Gloria name banner on her.  She danced around. 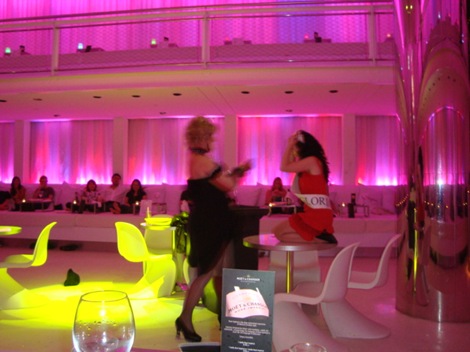 She went on one of the tables.  Then, Security threw her out. 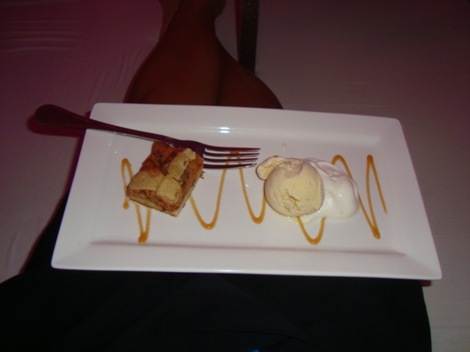 Ivan and Jennifer got a pie slice with almonds and peach.  It also came with a great ice cream.  They both enjoyed the dessert.  Ivan said the ice cream was the best part.  I received a tasty banana split.  The meal turned out really well. 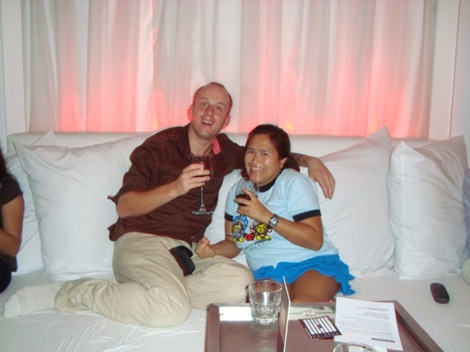 It was time for dancing.  They moved tables to create the dancefloor.  They were playing some good house music.  We all danced around and had lots of fun.