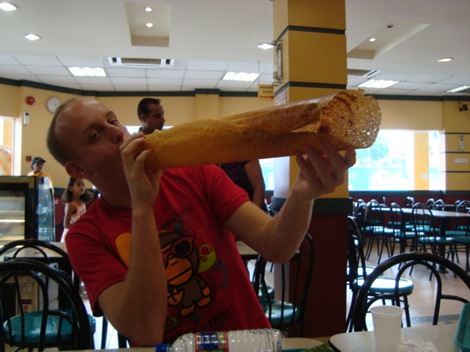 Ivan had a paper dosa.  I had a banana naan again.  Jennifer got paratha with masala dip.  Jennifer’s meal came with a dessert which is a pastry ball in a syrup.  The food was yummy.

We chilled at the hostel for most of the day.  I worked on the blog.

We got ready for the couchsurfing party.  It was a going away party for a couchsurfer named Joel.  He’s a guy from New Zealand.  We took a taxi to the party.  We had to walk around to find it since the street has a Road and an Avenue all in the same area.  Ivan bought some ethnic food nearby.  The party was a potluck with Ethnic Foods as the theme.  Ivan bought a French wine and some Mexican chips (like Doritos). I pointed out that they weren’t very ethnic, and Ivan suggested that in that case I give some of my ethnic bananas to the party – I told him that was never going to happen.

We sat down and chatted with people.  We didn’t know anybody there.  All the people were friendly though.  The eating began.  I brought a few bananas along to add to my dishes.  There was a great chicken cashew dish made by the host Joel.  There were ethnic dishes there as well.  I can’t recall the names though.  There was an Italian bread that you put ham and veggies in.  I put a banana in there – it was really good!  Jennifer liked the bread with cheese.  People were trying to convince Ivan to do some hypnosis.  It was really too loud for that.  Everybody was drinking alcohol.  I had a banana shake.  We saw Milo at the party and also one of her friends we met the night before. 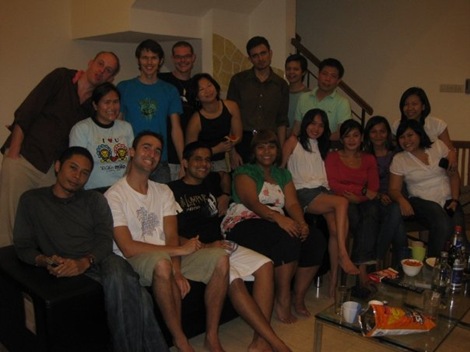 Everybody was still hungry after awhile.  Joel’s roommate cooked some noodles.  The noodles tasted good with bananas.  It was time to go to the Mayfair party.  Ivan and Jennifer had added their name to the list on Facebook for Mayfair.  It’s an event at the Beer Festival.  The Festival was being held at the Singapore Flyer.  Milo and her friends were also going to the party.  We got two taxis and were taken to the event.

We went into the line.  Ivan thought they probably wouldn’t ask for our name and they didn’t.  I guess adding our name to the list on Facebook didn’t matter.  There was a lot of booths set up selling beer. 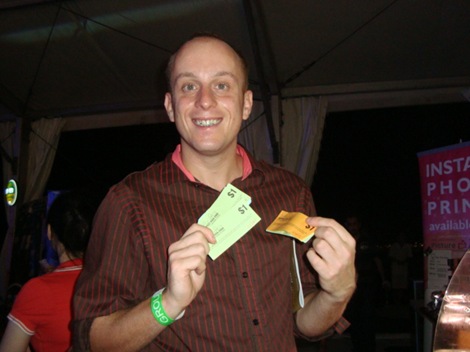 You have to buy vouchers to buy the alcohol.  There was a DJ playing some good house music.

I had a banana juice in my bag.  Ivan and Jennifer got a fruity beer.  Beer makes Ivan bloated and it makes Jennifer burp. 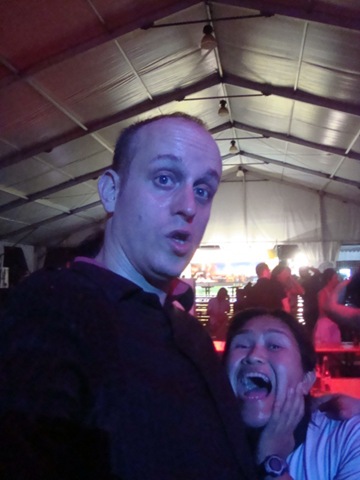 Ivan saw a booth selling a Singapore Sling in a bottle.  He got one for him and Jennifer.  It tasted pretty good.  Our group danced together.  It was a lot of fun.  There was a fan on the stage that was blowing out air.  So, the camera lens kept getting wet.  It was great dancing around.

We were tired from dancing so much.  So, we took a taxi back to the hostel.

Ivan, Jennifer and I checked out of The Mitraa Backpackers Hostel on May 1, 2009.  We got a taxi to our new hotel.  We checked in to the Furama Riverfront Hotel.  This was a lot nicer place than the Mitraa for not much more money. We put our backpacks in the room.

We wanted to get some lunch.  We took a taxi to a mall near the Harborfront.  We ate lunch at the Greenhouse Cafe.  Ivan had a mushroom soup and a tuna sandwich.  Ivan’s dish came with a dessert of peach cake.  I had a banana and peanut butter sandwich.  Jennifer had a chicken cutlet pasta.  The food was good here.

We were thinking about going to Sentosa Island.  We checked out the line and it was really busy.  Today it was Labor Day in Singapore.  So, everybody is off.  We thought about seeing a movie.  But, the line to buy tickets was also really busy.  We went shopping for awhile instead.

We took a taxi back to the hotel.  We chilled in the room for most of the day.

We were thinking of walking somewhere for dinner.  It was getting late.  It didn’t seem like there was much that close by.  Ivan thought we should check out the restaurants in the hotel.  Nothing really sounded too good though.  We went to the room to order room service.  Ivan ordered a chicken salad for a starter. 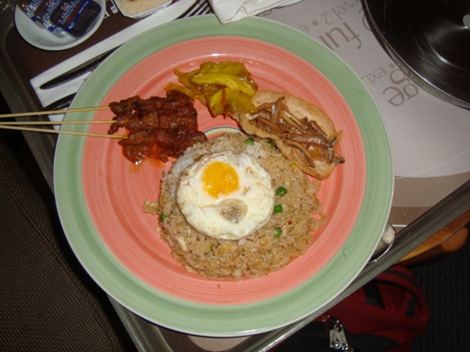 Jennifer got the nasi goreng while Ivan got a pasta with salmon.  I had a noodle dish with bananas and vegetables.  Bread and breadsticks also came with our meal.  The food was alright.  We watched some tv and then decided it was time for bed.