A Sushi Buffet and a Zoo

Ivan, Jennifer and I had lunch at the Grand City Mall on May 3, 2009.  We had Subway sandwiches.  We shopped a bit in the mall.

We walked back to the hotel.  Ivan went to the gym to work out.  I worked on the blog with Jennifer.  It was a relaxing day at the hotel.  I decided to stay at the hotel for dinner.  I bought some bread at the store to make myself a good banana sandwich.

Ivan and Jen took a taxi to Sakae Sushi.  There was a sushi buffet going on.  It cost S$20.80 per person. 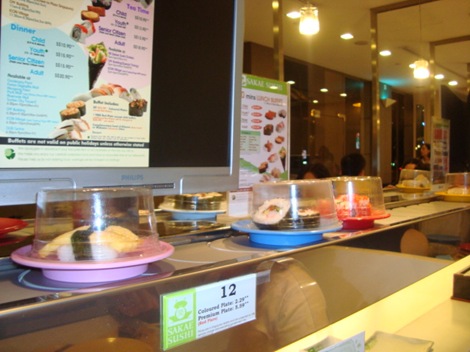 There was a conveyor belt with plates of sushi on it.  You can also order sushi on the screen and a server brings it to your table.  We ate lots of sushi.  They really enjoyed a good one with mango and salmon.  They were really full after eating so much sushi.  Jennifer said she was all sushi-ed out.

Ivan went to the gym since he ate so much sushi.  We watched some tv and then off to bed.

We woke up early on May 4, 2009.  We had set up Breakfast with the Orangutans at the Singapore Zoo.  There was some traffic, so we arrived a few minutes after 9 am.  We paid for the entrance fee.  Then, we went to the Breakfast with the Orangutans.  It was a breakfast buffet.  I had some banana pancakes.  Ivan and Jennifer got some cereal and toast.  The orangutans joined us for breakfast. 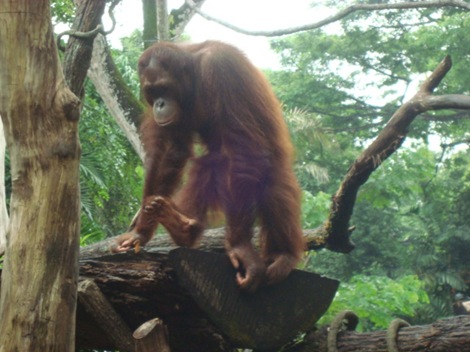 We were allowed to take pictures with them with our own cameras for free.  There was a baby orangutan who climbed on the adults and pulling on their beard.  Then there was an orangutan couple who kept holding hands.

Orangutans are apes, not monkeys.  Apes and monkeys are both primates.  Orangutans don’t have tails. Thats how you tell the difference between apes and monkeys. My dad Dave told me this. It was a fun breakfast.

Next, we went to see the polar bear feeding.  The polar bears are really big.  They seem very playful. 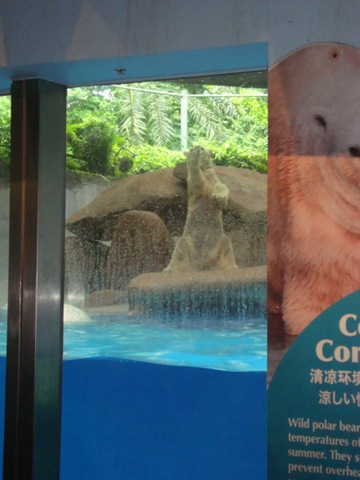 The mom polar bear stood on her back legs and waved at us.

We went to catch the show The Rainforest Fights Back.  It was about a man who wanted to cut down trees in the rainforest.  But, the animals fought back by throwing things at him.  Eventually, he left frustrated.  There were dancers and music. 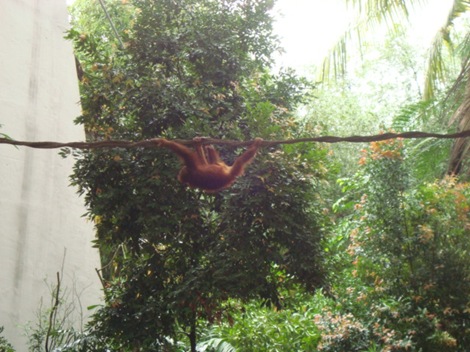 There was also lots of animals like orangutans, ducks and peacocks.  The show was alright.

The zoo is really cool since the animals aren’t in cages.  It’s all open area.  There is an aviary and that’s the only covered area.  But, that’s only so they don’t fly away.

Then, we went to see monkey feedings.  There was different types of monkeys like spider monkeys. 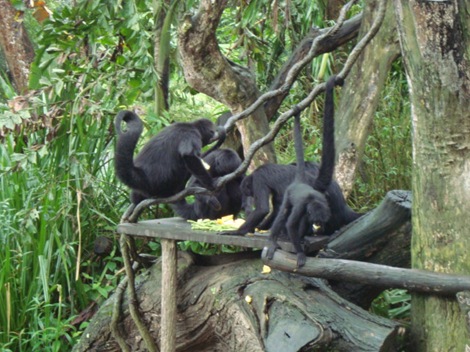 The monkeys were so excited to be fed bananas, sugarcane and other fruits.

It was my Great Uncle Dave that had invited me to the zoo.  He lives here along with my Grandpa Dave.  I come from a long line of Daves you see.  He said it’s better living at the zoo since you’re given free food.  In return, you just have pose for the tourists.  Great Uncle Dave fixed me some tea.  He gave me a few aged bananas he saved for me.

He’s a little shy so we didn’t get his face on camera.

I went to see Grandpa Dave.  We chatted for awhile.  I told him all about our travels. 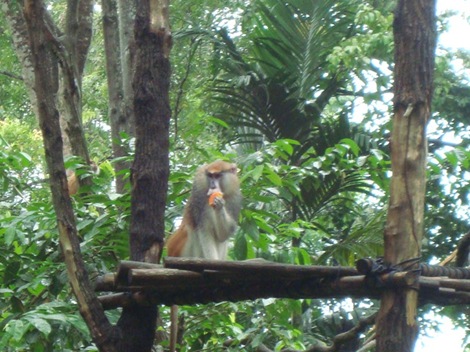 He wished that my dad was here as well as he hasn’t spoken to him for a while, and apparently Internet access is not available to monkeys in the zoo, so he just sends the odd banana card every now on again on big Dave’s birthdays.  He gave me a couple of bananas.  It was great visiting my family.  I saw some more monkeys hanging around. 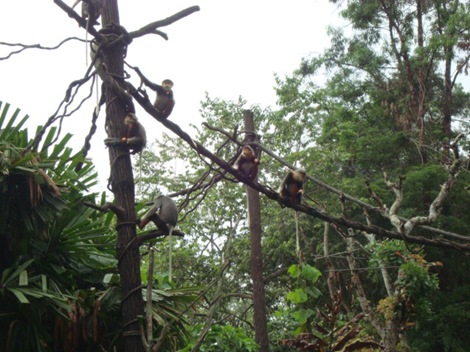 We saw the baboons next.

They have big red butts.  The baboons like to pick at each other’s hair. 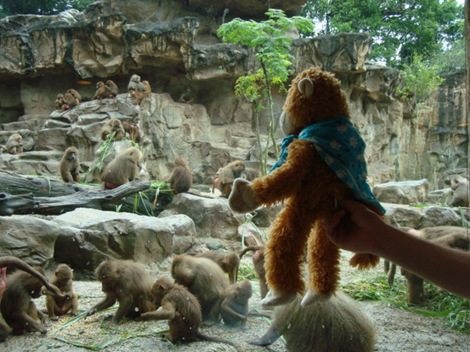 The baboons were getting fed when we were there.  They seem to fight a lot. 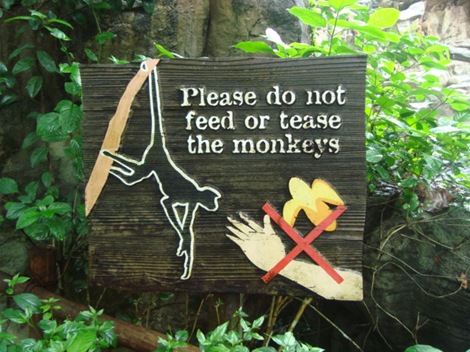 There was a sign saying that we shouldn’t tease or feed the monkeys.  I definitely wasn’t sharing my bananas with them! 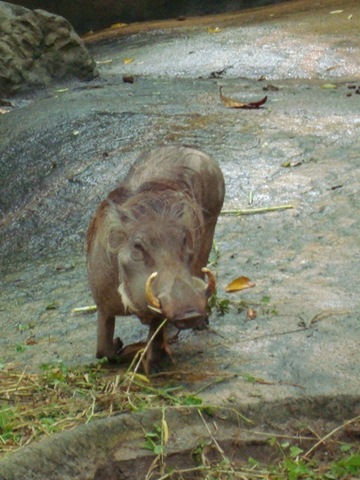 We saw so many animals like birds, white tigers, a jackal, turtles, warthogs and ostriches.

We went to visit the kangaroos. 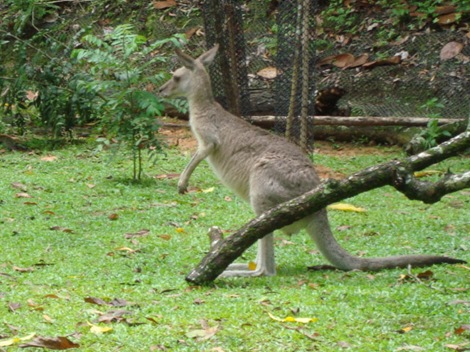 Kangaroo means “I don’t understand your question”.  The aboriginals were asked what the animal was and they said kangaroo.  The person thought it was the name of the animal.  It’s cute how they hop.  There was a baby kangaroo almost out in the open.

We saw the apes next. 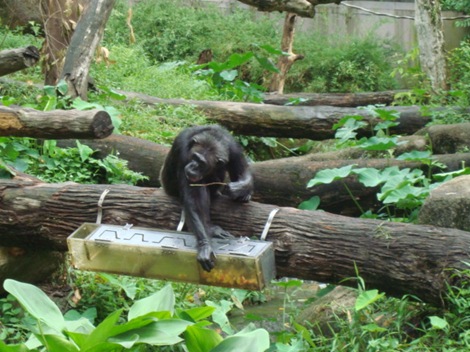 One of the apes was trying to steal food from a locked container with a stick.  He didn’t seem to be having any luck though.

Our next stop was the aviary.  There were lots of butterflies.  We also saw birds like a parrot. 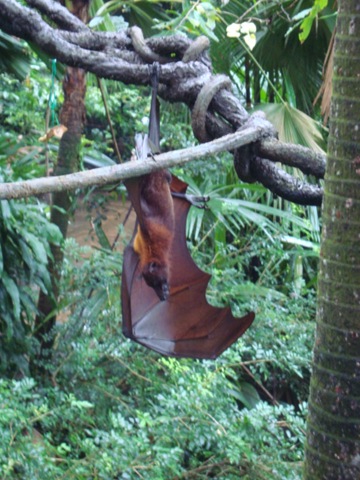 There were also bats and a sloth.  The world’s bigger flower was there too.

We saw even more animals like cheetahs, giraffes, rhinoceros, zebras and a crocodile.  We saw two rhinoceros being silly.  I couldn’t understand why he had a 5th leg sticking out.

We walked so much at the zoo.  It was such a fun time getting to see so many different animals.  The zoo is great since it’s organized and the animals aren’t in cages.

We took a taxi back to the hotel.  We stored our luggage with the bell desk.  We walked to the mall.  Ivan and Jennifer watched the movie The International.  I watched some cartoons on Jennifer’s iPod.  They enjoyed the movie.

We walked back to the hotel.  It was almost time to leave Singapore.  We took a taxi to the airport.  Ivan and Jen wasted time on the Internet.  I was reading my new book Monkey Business.  It was time to board the plane.  Our flight to Kuching, Malaysian Borneo lasted about an hour.  Ivan and Jennifer were given a form about the swine flu.  They had to list if they’ve been in a country lately that has been affected by the swine flu.  At the airport, a lot of the personnel were wearing surgical masks over their face.  Ivan and Jen had to turn in their form.  Also, they got their temperature taken.  Jennifer was handed a piece of paper with the closest hospital.

We took a taxi to Singgahsana Lodge.  We checked in.  Everybody wanted some food.  Ivan asked where the nearest restaurant was.  There’s a cafe that’s open 24 hours that’s only a 5 minute walk away.  We walked along the waterfront.  We didn’t find a cafe.  There were numerous food stalls.  So, we chose one.  We all had some noodles.  It was late, so we headed back to the lodge.