Ivan, Jennifer and I had lunch at Ninja Crepes on April 14, 2009.  Ivan and Jennifer had fish cakes for an appetizer.  It was the first time they had it in Thailand.  Ivan was glad he finally got to eat some! 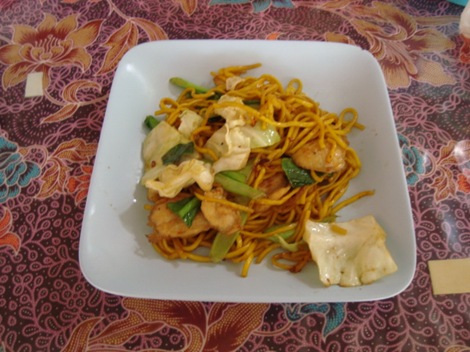 We all got noodles dishes.  It was very good food!

It was very, very humid today.  We chilled by the hotel pool for most of the day. 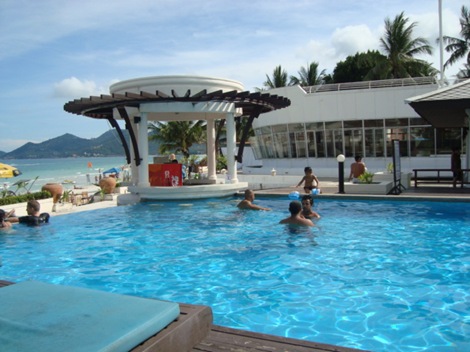 We hopped into a taxi headed to Bellini’s.  It’s a nice Italian restaurant.  We were served breadsticks with three different dips.  Ivan and Jen really liked the curved breadsticks.  They ordered a starter of pizza bread with garlic and rosemary.  It didn’t have any garlic on it so they sent it back.  I ordered a good spaghetti with pesto and bananas.  Ivan had a delicious pumpkin ravioli dish.  Jennifer had an average penne with eggplant, tomato sauce, creme and pesto.  Ivan and Jen wanted to ordered a chocolate fondant to share.  But, the table next to us ordered the last two chocolate fondants, so there were none left for us! It smelled good! I offered them one of my bananas instead, but they declined saying they really wanted a chocolate fondant and a banana just isn’t the same.

We took a taxi to the Song Kran Music Festival.  We wanted to see Graham Gold and Judge Jules perform.  We checked out the festival.  It was still a little quiet since it was early.  The festival runs from 6 pm to 6 am.  We took a motorbike to a massage place.  We all got full body massages.  Ivan and Jennifer enjoyed their oil massages.  It felt great!

It was still humid out.  We went back to the Music Festival.  There was a lot more people now.  We all bounced in the bouncy things.  There’s one shaped like a pirate ship.  The other one has a thing you climb up and you can slide down on the side.  I just stayed in the big bouncy thing with the slides.  I had fun in there.  I did dance around a little.  I didn’t have any monkey friends.  But, it was fun bouncing around and sliding down the slides.  They had inflatable pools.  They were so tiny – meant for little babies not adults.

Ivan and Jennifer danced for hours.  Graham Gold came on first. They thought it was annoying that there was two MCs singing over the music.  Jennifer thinks the music speaks for itself.  Judge Jules came on.  He had his assistant stop the MCs.  The music was really good.  We stayed until 3:20 am.  It was good fun!