Ivan, Jennifer and I checked out of Al’s Resort on April 15, 2009.  We got into the taxi around 9:30 am.  We were flying to Kuala Lumpur, Malaysia today.  It took forever to check in.  We just sat down and stood up when the line got really short like any smart person should….rather than stand in line for ages.  Our flight was scheduled for 10:55 am.  It was delayed about 30 minutes. 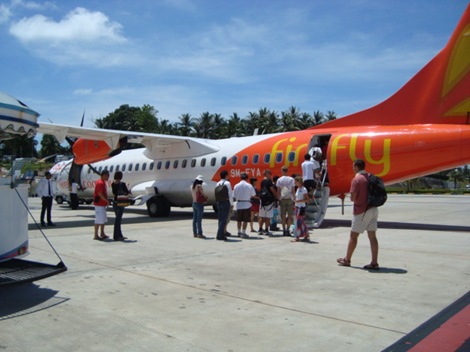 We boarded the plane.  The flight was an hour and a half long.

Ivan and Jennifer had a chicken sandwich at Starbucks once we landed.  I had a banana.  We took a taxi to the hostel.  It took 45 minutes to get there.

We checked in to the Equator Hostel, which had a very high rating on the website hostelworld.  We all took a short nap.

We went to the Times Square Mall which was handily right across the road from the hostel.  We ate lunch there.  We had spicy noodle soup.  It was good but a bit spicy!  I had to add bananas to my soup.  We went to see the movie He’s Just Not That Into You.  Ivan brought some Subway sandwiches into the theatre.  The theatre manager said he couldn’t eat it since it wasn’t bought in the theatre.  He wanted Ivan to leave it with him.  Ivan said no you might eat it.  He said he wouldn’t eat the sandwiches.  Ivan hid the food in the theatre.  Security came, but saw that Ivan wasn’t eating the sandwich.  So, security left.  A guy came and asked if the ticket he had was Ivan’s.  Ivan said yes.  Then, the guy tried to get the ticket back.  He was trying to get Ivan to step outside.  Ivan told the man to be quiet because he was trying to watch the movie! One man just stared at Ivan for an hour.  Ivan pretended to be eating something but wasn’t.  I can’t believe what a big deal they made out of it.  The movie was good.  We ate our sandwiches after the movie.

We had lunch at the KL Bird Park restaurant on April 16, 2009 where we had decided to spend the day visiting.  Ivan had the Mee Goreng.  Jennifer had the Nasi Goreng.

I had the Chicken Curry with Potatoes and Bananas. The food tasted good here.

We went to check out the Bird Park.  It was amazing to see many birds up close like eagles, owls, toucans, parrots and hornbills. 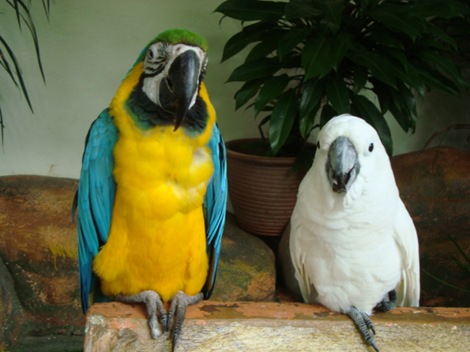 Some were in cages and others were free to roam around.  There’s a photo booth where they place birds on you. 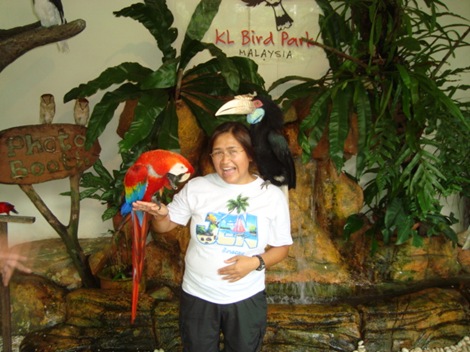 Ivan and Jennifer each took a few photos.

Next, we went to see the Lorries.  Ivan wanted to feed the birds seeds and milk.  The birds flew to him and were on his arm. 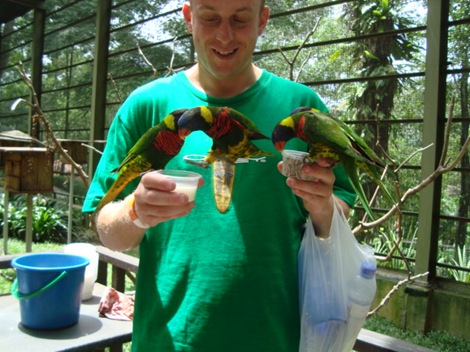 Jennifer was scared of the birds flying around.  She didn’t want to feed the birds since they kept flying at Ivan to get to the food.  A red bird thought Ivan had food on his head – so he kept pecking at the top of his head. 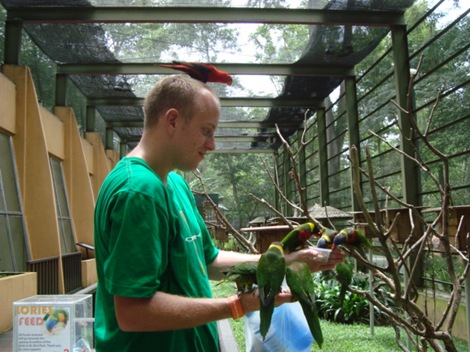 It was pretty funny! Watch Ivan feed the lorries:

Ivan convinced Jennifer to feed a bird.  She was scared that birds would fly at her. 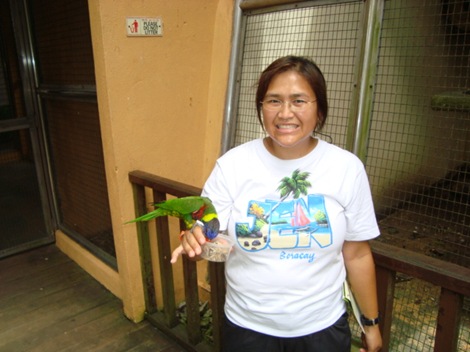 Ivan said he would stop them from flying at her.  I fed the birds for a minute.  It was weird having birds hold on to you.

We walked around the park more.  We saw four ducks walking around.  It was so cute!

I’ve never seen a duck before.  It’s really cute how they waddle.

We saw the storks, emus and ostriches.  Our next stop was the nursery. 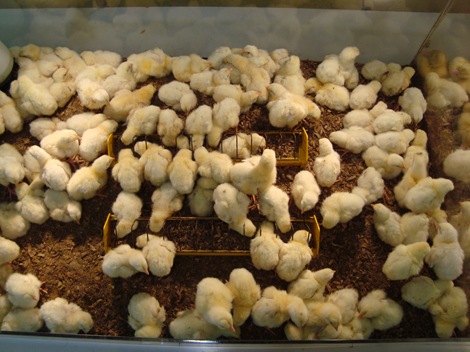 There were lots of baby chickens and a few baby ducks.  There’s so furry and tiny. I wanted to jump in and play with them, but Jennier said that even though I’m just a little monkey, these chickens are even smaller than I am and so I might scare them!

There’s a net over the bird park so the birds don’t fly away.  I saw some monkeys on the outside of the net.  They were trying to get into the park.  They were jealous that I was inside and they weren’t.  They kept trying to bribe me with bananas to let them in.  I told them no.  One monkey tried to bribe me with his prized banana.  It’s an aged banana from Australia.  I was tempted to let him.  I was going to, but Ivan and Jennifer stopped me.  They thought the monkeys might cause some trouble with the birds.

We headed to the Bird Show.  We took our seats in the front row. The birds performed many different things.  A bird did flips.  Another one flipped over a sign that said Welcome.  One bird made the Malaysian flag go up on the pole. 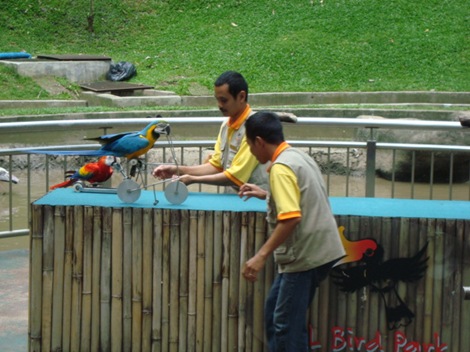 Two birds had a race – one was on a bicycle and the other on a scooter.  There was one smart bird who could add up numbers.  He would ring the bell with the sum of the two numbers he was given.

We saw eagles fly around and grab food that a person from the audience held up. 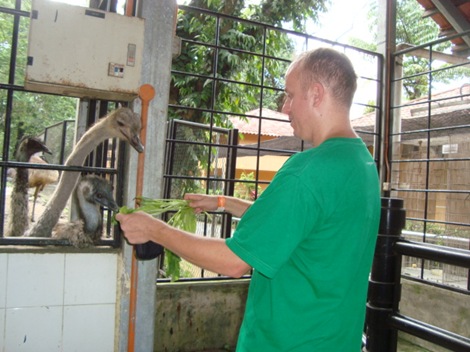 The ostriches are taller and bigger than the emus.  They do look similar.  They really grab at the food.  I guess they were hungry.  I bet that’s how I would act if I were in a cage and I really wanted bananas that were being fed to me.  One ostrich bit Jennifer.  She said it hurt a little.  The ostriches have no teeth, so I’m sure it didn’t hurt too much.

We walked around some more.  We saw a few peacocks. 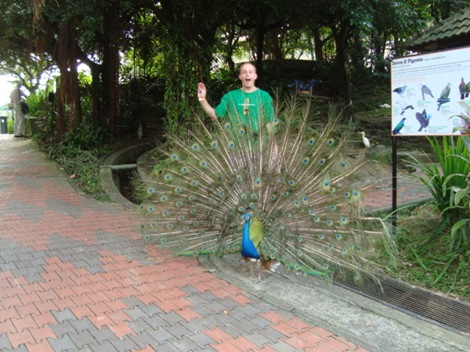 It’s so beautiful when they spread their feathers.  We also saw a lot of flamingos.  We had a great time at the Bird Park.  It was quite a unique experience being able to walk around and see exotic birds around every corner. Its much better than seeing them in cages.

We chilled at the hostel for awhile.  We were getting hungry.  We got ready for dinner.

Ivan and Jennifer took a taxi to Frangipani.  It’s a French restaurant.  Ivan read a lot of good things about it.  There’s a big pool of water in the middle of the restaurant. 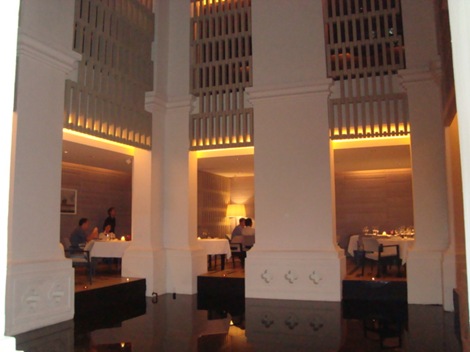 It’s really pretty inside.  The menu has great descriptions of each of the dishes and goes into quite a lot of detail into how they are made.  For example. the dish that I ordered was described as follows : ‘A bunch of ripe bananas picked from the very best trees in Asia, are peeled slowly, and then left to marinade in banana sauce over night. In the morning they are chopped up finely and then mixed with some grilled bananas and then served on a banana leaf along with a side of rich banana soup infused with extra bananas’.

Ivan and Jennifer ordered the three-course meal for them to share.  It’s 120 RM and you can add dessert for 20 RM extra.

The restaurant also brings out other extra dishes throughout the meal for free.  The first thing they brought out was a pastry with mushrooms inside. Ivan and Jennifer liked this.

The first course they ordered was Mozzarella, zucchini, aubergine and tomato jelly with ratatouille coulis, roast garlic and brioche croutons in basil pesto.  This was a bit weird and tasted okay.

The second course Ivan and Jen ordered was Warm tea smoked salmon with confit potatoes, crème fraîche and salmon roe.  The salmon tasted good.  The potatoes with the roe was alright.

The restaurant brought out another free dish which was a raspberry freeze.  It was nice and sweet.

The main course they ordered was Guinness marinated organic chicken breast with walnut and spinach “macaroni cheese” and beer sauce.

The sauce was delicious. The macaroni cheese was very unique.  This was Ivan and Jen’s favorite dish.  The chicken went very well with the sauce.

For dessert, Ivan and Jennifer got the Flourless chocolate mousse cake with vanilla sauce and chopped nuts.  It was light just like the description said.  It was a good cake. 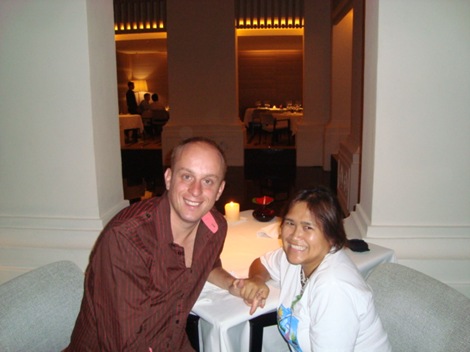 The atmosphere is really nice at this restaurant.  Ivan and Jennifer thought the food was alright, but not the best. At least they gave us lots of extra free dishes, and the service was really good.

The street where Frangipani is located is filled with bars and restaurants.  Ivan spotted a nightclub called Envie.  Ivan was told that it was the grand opening. We all went inside.  The menu has drinks for the sins of man like Envie, Sloth, Greed and Wrath.  They got the drinks.  The drinks didn’t taste so good, but luckily the silly barman forgot to charge Ivan for the expensive drinks so they were free!  The music was hip hop inside.  The club was small so it was really smoky.  We decided to leave.

We got into a taxi headed towards the Traders Hotel.  They have a SkyBar that has a good view from really high up.  We got there and took the elevator to the bar.  Ivan thought it would be outside.  It was actually inside.  There was a pool and lots of tables.  We sat down.  Ivan and Jen ordered a drink.  I ordered a banana juice.  Ivan got a good mojito while Jennifer had a sake drink.  There was a nice view of the KL Tower and the Petronas Twin Towers.

We went upstairs to get a better view.  We finished our drinks.  Then, we took a taxi back to the hostel.