Ivan woke up early on November 1, 2008.  He had breakfast and then left at 8:30 am.  He was trekking up the Tiger Leaping Gorge with two backpackers who were also staying at Mama’s.  Ivan said he wasn’t sure about the weather.  So, he’d be back tonight or tomorrow night.  Jennifer and I slept for a few more hours.  We woke up around 11:25 am.  Jennifer tried to turn on the lights but they didn’t go on.  We went downstairs to get some breakfast.  Ivan told us earlier that the banana pancakes were delicious.  We both ordered a banana pancake.  They were huge!  They make them with eggs and the pancakes are thicker than the crepe like pancake we’re used to getting.  I ate all of my pancake.  Jennifer almost finished hers. I ate the rest of hers.  Wow, it was such a tasty pancake!  I believe they’re the best banana pancakes in China so far!  Jennifer asked why the electricity wasn’t working.  We were informed that the power wouldn’t be back on until 5 pm.  I guess it’s an effort to save energy in the Old Town.  It’s only done on Saturdays.  Jennifer wanted to upload all her pictures to Flickr.  It would have to wait until later in the evening.

We walked into town to browse all the shops.  The weather was so nice.  Jennifer brought her jacket but didn’t need it at all.  The shops are really nice. 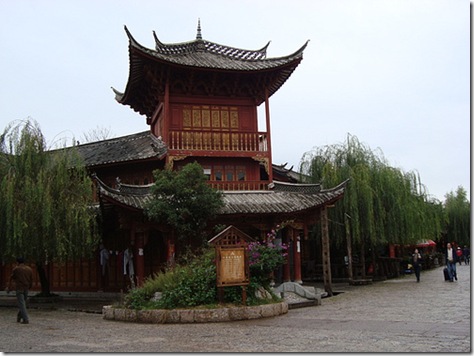 We walked to the Market Square.  Jennifer found an ATM there to get some money out.  We just looked at different shops.  Jennifer did not buy anything.  We wanted to have a snack.  We went to a cafe called Cherry Lane.  Jennifer wanted a shake, but they didn’t have any.  Jennifer ordered strawberry ice cream and a banana ice cream for me.  Then we walked back to Mama Naxi’s Guesthouse.  Jennifer and I chilled for the room.  She was reading The Da Vinci Code.  Jennifer was waiting for the power to come back on.  The power came back on at 5:16 pm.  She headed down to the dining area about 5:45 pm.  We waited for dinner.  Jennifer ate a lot of  food.  It was good again.  I just had a banana pancake ordered for me.  We headed back to the room.  I started doing my Math homework.  Jennifer uploaded all the pictures from our trip so far.  She’s so grateful for Flickr Uploadr since it makes uploading the pictures so easy.  She worked for a long time on the pictures.  She’s so happy it’s all done.  Check out the pictures here!

Jennifer and I woke up around 11:30 am on November 2, 2008.  Jennifer was happy to find out the power was working.  We were in the room for a little while just surfing on the internet.  We went downstairs to head for lunch.  Mama told Jennifer that her friend would be back today.  She replied that maybe today or tomorrow.  She wasn’t exactly sure.  It seems there’s no good internet access available up on Tiger Leaping Gorge.  We sat down at the Petit Lijiang Bookcafe.  Jennifer order a cheese burrito.  I had porridge with bananas.  Jennifer was envisioning a cheese burrito from Roberto’s back in Las Vegas.  Of course, her burrito in Lijiang was nothing like that.  The bread was similar to the outside bread of a calzone.  Inside the burrito contained cheese, rice and red & green peppers.  It tasted strange with the vegetables.  She reckoned it would taste better with just the cheese.

We walked into town to do more shopping.  Jennifer didn’t go too far into town since she didn’t want to get lost.  It wouldn’t be a good thing not being able to get back to the guesthouse.  Jennifer was looking for a few souvenirs for her nieces.  There were plenty of places with handmade pouches.  We were in one store filled with coin purses, pouches and rugs.  Jennifer didn’t notice the wood barrier on the floor and fell down right on her knees.  The ladies in the store all made a sound after she fell.  One of the ladies motioned for her to sit down and rest.  The lady began rubbing her knee.  Jennifer said it’s okay and just relaxed a bit.  She recovered quickly and bought a few pouches in the store. 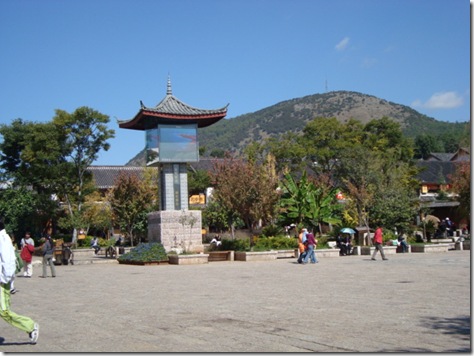 The Chinese people still think Jennifer is Chinese.  Jennifer says I don’t know what you’re saying.  The person seems a little embarrassed and tries to speak some English.  The weather was nice again today.  I think this town is nice.  We walked around a bit. 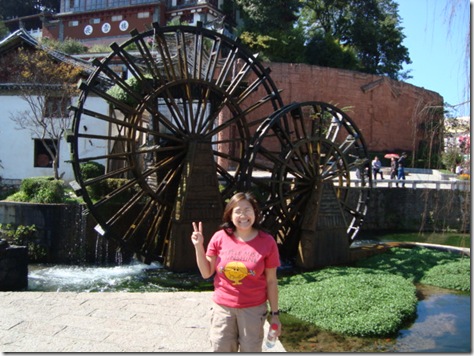 We headed back to Mama’s.  I’m glad we had a few days to really relax since most days we’re on the go all the time.  Jennifer wanted to read more of her book.  We ate dinner again at 6 pm.  I had fried bananas with chocolate this time.  We went back to the room to wind down.  Ivan arrived shortly around 6:45 pm.  He was so tired and very sunburned.  We didn’t do much this night.  We heard about the trip and saw some beautiful pictures of Tiger Leaping Gorge.

We walked for awhile trying to find a British bar that sells Mexican food.  Unfortunately, the place is only open for dinner.  We decided to get some food at an Italian restaurant called Buon Appetito.  Ivan had a tuna pizza.  I ordered the Banana Penne.  Jennifer had the Lasagna.  The food was pretty good.  We had a few hours to waste before our bus ride to Dali later in the afternoon.  We walked around Old Town Lijiang.  It was another nice day.  Jennifer bought a few bracelets.  We went back to Mama Naxi’s.  Mama offered us a sweet treat.  We weren’t sure what it was.  I passed since it didn’t have bananas inside.  Ivan and Jennifer seemed to like it.  We sat down in the courtyard.  Ivan and Jennifer chatted to two Canadian women.  We paid for our hotel bill and breakfasts.  The bill worked on a tab. Mama gave Ivan and Jennifer a cute native necklace and gave them a kiss. 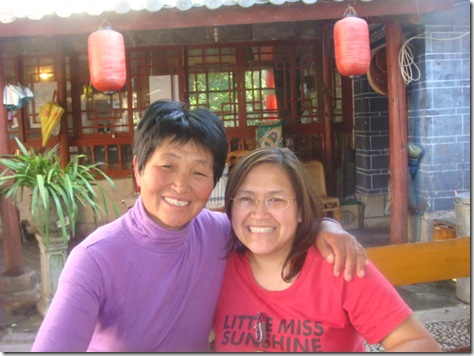 She gave me two bananas and I was thrilled.  Mama is such a friendly woman.  Mama’s Guesthouse is great to stay at!  We were picked up and we walked to the bus.  Our bus ride was 3 1/2 hour to Dali, China.  We got a taxi to The Jade Emu Guesthouse.  Ivan read some great reviews about this hostel.  There’s a great courtyard right when you walk in.  It has a pool table, tables & chairs and a bar (which is always the reception area).  We were in the Jin room for the night.  The room was very clean.  It had a nice bathroom with shampoo and shower gel.  We got some food ordered in.  We sat at the bar.  The food was eggplant with bean paste, 1000 year egg and crispy chicken Dali Style.  I had the Fried Bananas with a soy sauce.  The food was pretty good!  The owner Dave was really cool?  There was good music videos playing on the wall.  The music was a variety from Led Zeppelin, The Doors, Radiohead, The White Stripes and U2.  Dave challenged Ivan to a game of pool.  The bet was if Ivan won, the room would be free for the night.  If Ivan lost, he would buy Dave a beer.  How cool is that?  Ivan and Jennifer had some local plum spirit shots.  I had banana juice.  I never get to drink the good stuff.  We went to bed later on.