We had some lunch at the 7th Heaven Cafe on October 22, 2008.  We then walked around town.  Ivan was looking for a place called Monkey Jane’s.  It’s a rooftop bar.  We finally found it.  It has a sign but it’s a little hard to see.  We decided to chill here for a little while.  Ivan and Jennifer had a Liquan beer (local beer).  I had a monkey drink called Monkey Fizz.  It’s basically a banana juice with a fancy name.

It’s a great bar with nice scenery of Yangshuo.  We just relaxed while reading magazines and playing games.

Ivan told the people staying at the Yangshuo Culture House about Monkey Jane’s.  Some of the people decided to go out and check out the rooftop bar.  It was two other couples (German and Canandian) and two American guys.  We went upstairs to the bar.  There was only one guy there.  We ordered some drinks.  It was happy hour, so drinks were 2 for 30 Yuan.  I got a Monkey Fizz again.  Shortly after, we went to go play Beer Pong.  I just wanted to watch Ivan and Jennifer play.  Plus, I’m still too young to drink alcohol.  No fun!  Nobody had played before except for Ivan and Jennifer.  Jennifer said she sucked at Beer Pong.  Ivan and Jennifer ended up winning three times in a row.  Jennifer was doing quite good tonight. 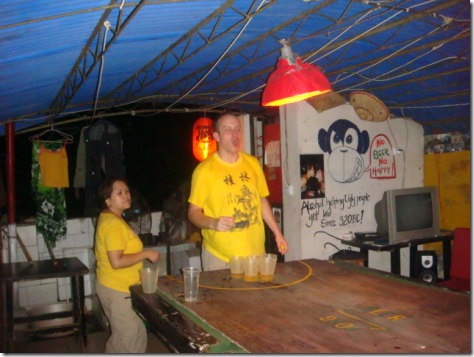 They did get a new challenger.  They found out that they were playing Monkey Jane!  She was a friendly woman.  Unfortunately, the guy and Monkey Jane ended up beating Ivan and Jennifer.  We called it a night and went home.  It was a good last night in Yangshuo.

We woke up on the morning of October 23, 2008 and it had been raining most of the night.  We had to catch a bus to Guilin.  From Guilin we were going to catch a train to Chengdu.  We packed everything up.  We walked into the rain to wait on the street.  The bus to Guilin stopped right on the street and picked up passengers. 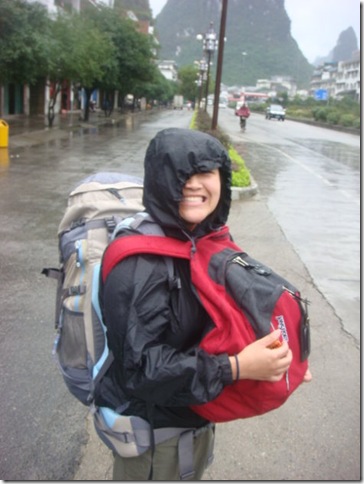 The bus ride was an hour long.  It took us right to the train station.  How nice!  We went inside and waited for a little while.  Ivan bought some noodles, crackers and of course bananas.  We boarded the train.  We bought two bottom soft sleepers.  It’s a room with two beds on each side.  It turned out that we had the room all to ourselves! 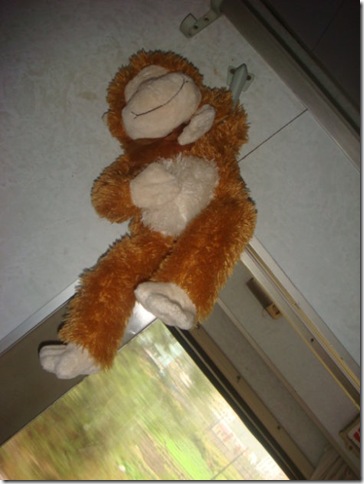 It was great so we could chill out.  We listened to music on Ivan’s iPod speakers.  The train ride was a long 25 hours long.  It actually went by pretty fast. 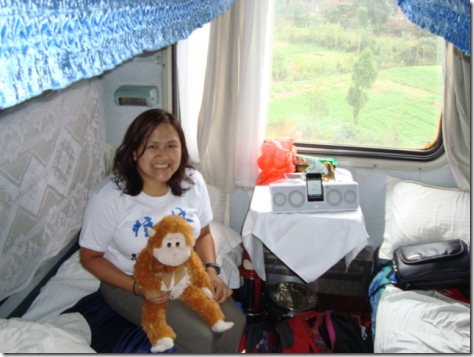 I’m so glad that they sold bananas on carts.  I was hungry for sure!