Ivan, Jennifer and I woke up early on October 13, 2009.  We walked to the train station to meet a bus.  Today, we were going on a Tuscan Tour.

The bus was packed.  The views were amazing on our way to Siena.  It was a great day out!

We arrived in Siena.  Our tour guide walked us to meet our Siena guide.  It was a local woman.  She took us to the oldest bank in the world. 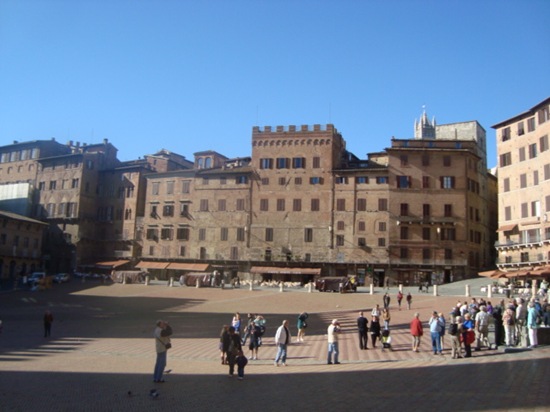 We saw a really big square.  Next, we visited a cathedral. 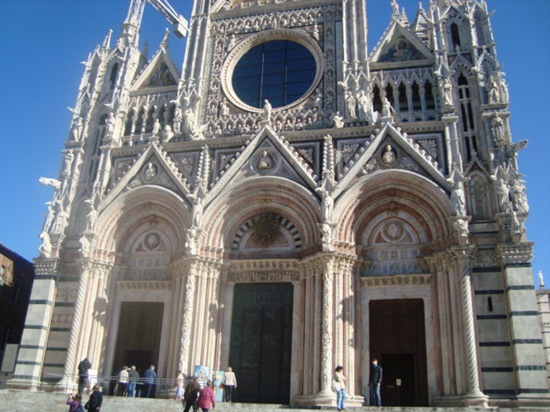 There was lots of great artwork with vivid colors inside.  It also had amazing old murals on the floor. 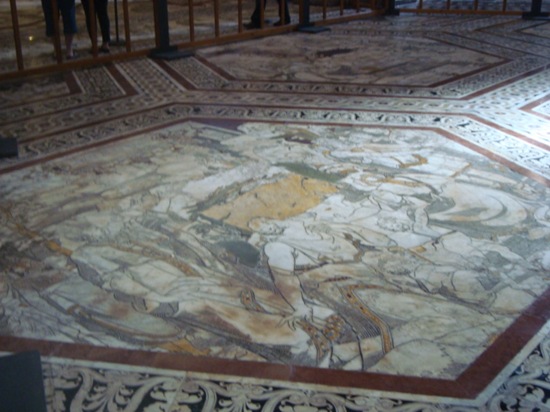 We stopped to listen to a girl playing some amazing music.  I’m not sure what the instrument was called.  She was really talented.  We wanted to listen more but we had a limited time.  Watch the short video of the music below.

We walked to the main square and stopped for some ice cream.  We met the group in the square and walked back to the bus.

We drove to San Gimignano.  We stopped at Fattoria Poggio Alloro.  It’s a farm.  We looked at the wine facilities.

It was time for lunch.  Ivan was getting vegetarian dishes.  We first got bread with extra virgin olive oil.  Ivan had pasta with tomato sauce.  Jen got pasta with meat sauce.  I had pasta with tomato sauce and bananas.  Next, Ivan got an omelet while I got a banana.  Jennifer got salami and ham.  Next, we received some tasty cheese.  All the dishes came with wine.  Ivan and Jen drank plenty!  We got some crostini next.  All the food that was served was made at the farm except for the cheese.  It was a great meal!  Ivan was talking with an older American lady during lunch who kept talking about her life.  She was really friendly.

Ivan and Jen were feeling a bit drunk after all that wine.  They took some photos on the balcony. 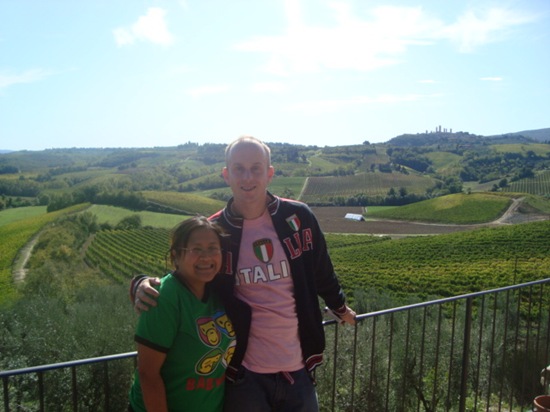 Ivan picked up some wine for 5 Euros in the farm’s shop.  We walked back to the bus.

We were driven to San Geronimo next.  We went to the main square and admired all the tall buildings around it.

Jennifer loves the squares.  She wishes Vegas had some big squares too.

We stopped by an ice cream place that has award winning ice cream.  It was really creamy and tasted awesome.

We walked around and found a cheese shop.  Ivan and Jen purchased some tasty pecorino cheese.  They ate some and Jen decided to keep the rest for later on.

Our next stop was Pisa.  We saw the famous Leaning Tower of Pisa. 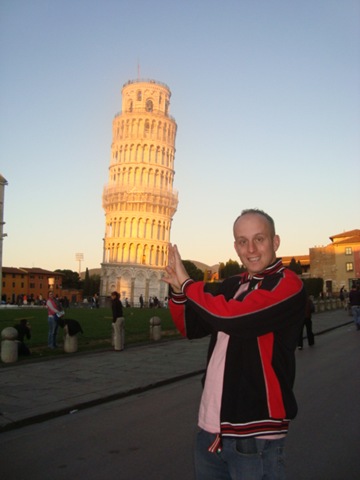 I don’t know how it remains standing with how it’s slanted is.

We were driven back to Florence.  Our Tuscan tour was lots of fun.

We walked back to the hostel.  We were stuffed from all the food we consumed.  We stopped at a store to buy some grapes and yogurt for dinner.