It was time for surfing lessons.  Ivan decided to go.  Jennifer was so tired since she was up late last night reading her book.

Jennifer and I slept on a couch while Ivan went surfing.  He couldn’t stand up on the board.  He didn’t like surfing at all.  He sat down and watched the rest of the group try to surf.

Ivan and Jen checked in to Nomads Odyssey.  It’s a new hostel that opened up in March 2009.  It was very clean inside and quite trendy compared to most hostels we have been

We were in a 6 bed dorm.  It turned out we had it all to ourselves.  It had a really great bathroom that was more like the kind you would find in a hotel rather than a hostel.

We had dinner at a restaurant called Chameleon.  Ivan and Jennifer got the $30 deal that included a three course meal with a glass of wine.

Ivan got the trout sashimi with salad and soba noodles for a starter.  Jen had lentil and curry soup.  Ivan got the chicken breast for the main course.  Jennifer had the linguine with smoked chicken.  I ordered spaghetti with bananas.  Ivan and Jennifer got the waffles with ice cream.

Ivan got chocolate ice-cream while Jennifer had mango.  The meal was real tasty.

We walked back to the hostel.  I watched Ivan and Jennifer play ping pong in the hostel lounge.  They’re both very competitive.  Ivan won.

Ivan, Jennifer and I had to switch to a different 6 bed dorm on August 22, 2009, as the room we were allready in was full up.

Ivan got wraps for us to eat.  Ivan and Jen had their chicken and avocado wrap.  I had a nice banana salad wrap.

We got picked up at 10:05 am for our trip to Nimbin.  Nimbin is a town where most of the people are in favor of legalizing marijuana.  Ivan read on the internet that Nimbin is filled with hippies doing it and trying to sell it on the streets. 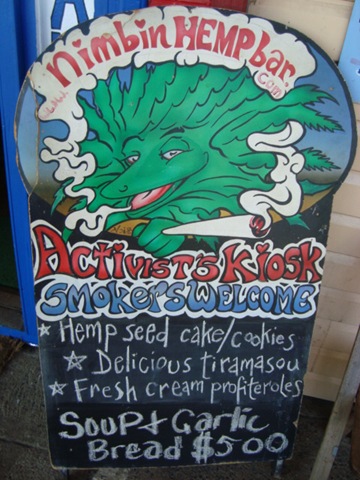 We got to Nimbin.  It wasn’t exactly as we thought it would be.  The hippies weren’t really there anymore.  It seemed that Nimbin got cleaned up by the police.  We did see the Nimbin museum which was filled with quotes about marijuana. 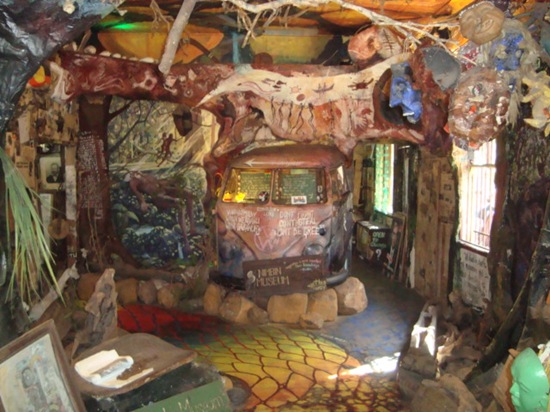 It was quite a colorful museum.  It was free admission, but you could make a donation.

There were ladies on the street asking if we wanted pot cookies.

We went back on the bus.  Some people had bought the pot cookies.
We drove to a pub for lunch.  Our driver got busy right away on the bbq lunch.

Nobody seemed to be stoned.  Everybody just chatted in their groups on the grass.  Ivan and Jennifer had veggie burgers for lunch.  Jen didn’t think they tasted so good.  I had a banana sandwich.  The pub was ordinary.  Our group wasn’t very lively.  The guide didn’t really talk much.

We drove to a waterfall after lunch.  The guide was trying to get people to jump into the water.  Only about 10 people actually did.

The people who jumped said the water was freezing cold.  We just watched.  Ivan and Jennifer drank some cider while they watched the jumpers.

The bus drove the group back into Byron Bay.  We arrived at the hostel at 5:30 pm.

We chilled for awhile.

We walked around to find a place for dinner.  Ivan thought Asia Joe’s looked good.  It was BYO (bring your own alcohol).  Ivan ordered pad thai.  Jennifer got the salt and pepper shrimp with two kinds of noodles.  I got Singapore noodles with chicken and bananas.  Ivan ran back to the hostel to get a bottle of wine.  It was the wine they bought on the Hunter Valley wine tour.  The food turned out really great. 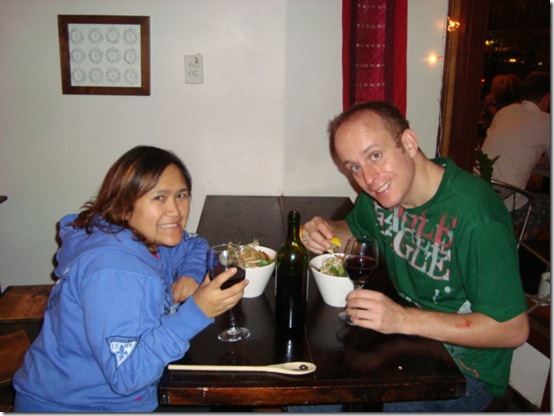 We walked around to get some exercise.  We used the internet at the hostel.  Then it was time for bed.