We walked to Squeeze ‘n’ Bite for lunch.  Ivan ordered a tomato soup and museli with yoghurt.  I got a banana salad with chicken.  Jennifer got a vegetable panini.  The food was great.

We got a tram to the city.

We went to the Salvador Dali exhibition called Liquid Desire.

It features a lot of his early work.  It also included some of his surreal art.  I’m glad that most of the art had a description about the work.  It usually explained what was in the picture.  Otherwise I wouldn’t have seen it or understood it!  Cool stuff.  Surreal art is very interesting.  Jennifer and I didn’t know that he planned to make a film with Disney.  It never got made.  But, a few years ago some French guy from Disney decided to make it.  They showed that film Destino there.  It was pretty kewl.

We walked to the Syn Bar.  Ivan signed up himself and Jennifer up for a salsa class.  It’s a free class no Wednesdays.  I sat down and watched because there were no monkeys for me to partner up with.  The teacher was really good.  She taught them some basic moves. 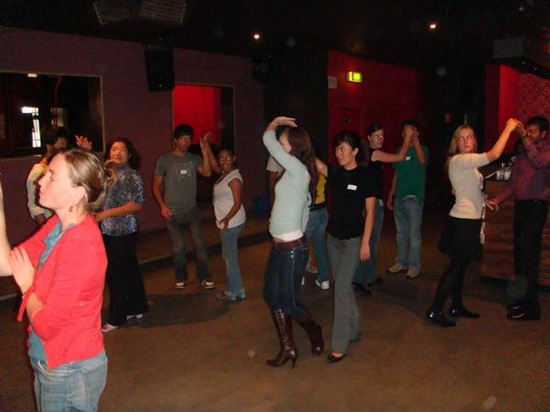 The girls had to move around each time to get a new partner.  Jennifer said some guys were good and others were just okay.  It was definitely a workout!  Ivan and Jen had fun, but salsa seems challenging.

We got a tram to the Red Monkey Bar.  Ivan and Jennifer read about it in a free tourist magazine.  I’ve been there, but in the monkey section and it was busy.  It’s a happening monkey hangout.  The Red Monkey Bar was empty except for one person.

Ivan and Jennifer walked around to find a place to eat.  They were going to eat at a restaurant.  But, two big tables had just ordered.  So, it would probably take awhile for us to get our food.  We decided to walk around.

Ivan found Urban Burger.  It’s a burger place that has some healthy options. 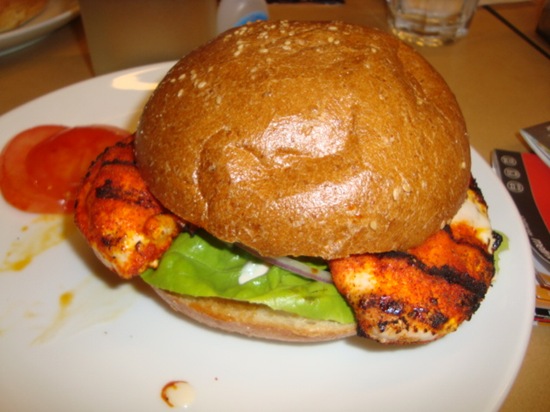 Ivan got the Urban Turban which is a tandoori chicken with mango, chili relish and zesty aioli.  I had a Brie Twist with bananas – basically a chicken breast with pesto, brie, aioli, salad and I added bananas.  Jennifer got the C.A.B. without the bacon.  It was a lovely chicken burger with avocado, salad and aioli.  The burgers were quite big and tasty.

Ivan and Jen went to see the movie Bruno.  I watched Gorillas in the Mist on Ivan’s iPod.  They really thought the movie was really funny.

We got a tram back to our hotel.  We went to the Pint on Punt pub.  It was karaoke night.  The people singing weren’t very good.  Ivan and Jen each had a glass of red wine. 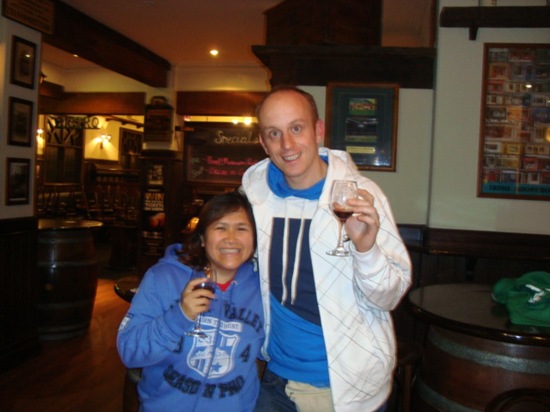 I had a banana juice.  We only stayed for a short time before heading up to sleep.

Ivan, Jennifer and I moved to a room with a double bed and a single bed on August 13, 2009.  It was bunk beds which is weird. 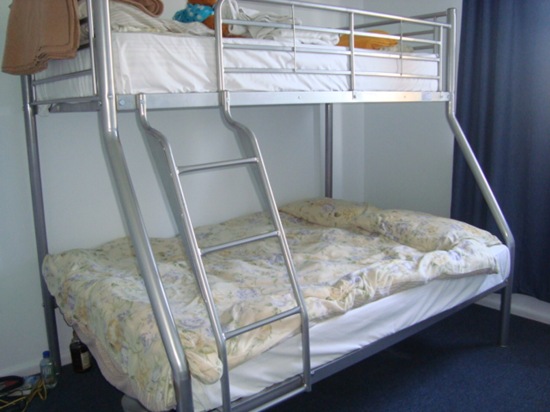 I was happy to have my own bed for the night.

We went to Fifteen for lunch.  It’s Jamie Oliver’s restaurant.  The chef training foundation allows people 16-24 (who have been homeless, had drugs/alcohol problems in the past or unemployment) the opportunity to learn skills to work at the restaurant.  Ivan and Jennifer wanted to do the Express Lunch which includes a two course meal for $15.

The first course was ribollita which consists of tuscan bread soup with cavalo nero, cannelini beans and olive oil.

The second course would be rotolo of baby spinach, baked ricotta, mushrooms, marjoram and lemon with brown butter.

I was told by one of my monkey friends at the Red Monkey Bar about the secret menu at Fifteen.  I asked the waiter for the secret monkey menu.  It was an express lunch only for monkeys.  My first course   was banana spring rolls with vegetables.  The second course consisted of penne with a light creamy sauce and bananas on top.

The food turned out great!  It’s such a bargain especially in a town like Melbourne.  There’s nothing really express about it in terms of time – but it’s worth the wait!

We took a tram to the city.  We went to the Victoria Library.  Ivan was going to walk around the city.  I worked on the blog in the library.  Jennifer used the free internet there.  Meanwhile, Ivan did some shopping.

We walked to a bar nearby.  Ivan and Jen each had a few glasses of red wine.  I had some banana juice.  We wanted to be in a good mood since we would be going to see Dracula’s Cabaret.

We got a bus to the Dracula’s Cabaret.  There was a long line to get in.  We were a few minutes early.  It was a bit cold outside.  Ivan didn’t think it would be so busy on a Thursday night – but there was lots of people.

We went inside.  We were told our seat numbers for the show.  We got into the Ghost Train with two other people.  The people behind us kept poking us to scare us.  Ivan kept screaming jokingly.  It was a short, fun ride.

We were seated in a long table.  Unfortunately, we were facing away from the stage.  We were planning to turn our seats to get a good view of the show.

The waiters were dressed up in gothic clothing.  Our waitress had on a black dress with lace on it.   I brought bananas for my dinner.  Ivan and Jennifer were served a quiche with onions, semi-dried tomatoes and cheese.  Jennifer gave me a few bites of her quiche – I added bananas on top.  It tasted good, but probably wasn’t too healthy.

Ivan gave the waitress coupons for a free drink and a souvenir.  The drink came with a free plastic spider on top.  The drinks were fruity but weren’t very strong with alcohol.

Ivan and Jen got a bottle of Shiraz to share.  The main course was a choice of beef, fish, chicken, lamb or vegetarian. 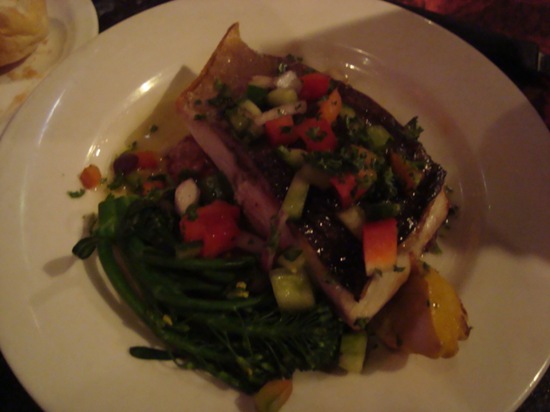 Ivan got the fish while Jennifer ordered the chicken.  The food was quite tasty.  I had some of Ivan’s dish with a little banana on top. 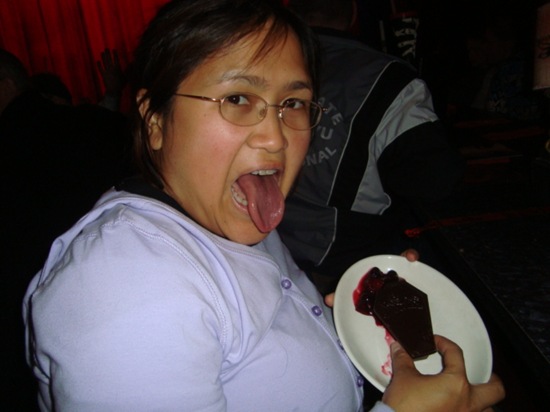 The show is called Black Blood Return of the Romantics.  It consists of a drummer, two men and two women.  It’s a funny goth show.  They did lots of singing, dancing and comedy.

This is some of the acts they performed.  There was a Bejing Midget Olympics which was puppets that made fun of the olympics.  Ramsay’s Cooking Nightmare was another puppet making fun of the cooking chef.  The Stones Zombie Puppet Tour was really funny with Stones music and scary looking puppets.  Return of the amazing Pink Floyd Robots played great music by Pink Floyd and had robots.

The main comedy guy walked around and made fun of the audience.  He was good at improv.  Jennifer thought he looked like a gothic version of Professor Snape from Harry Potter.  The singing was really good with songs from the 80’s.  This is a must see show in Melbourne!

We went back on a bus feeling full and very entertained.