Ivan booked a taxi.  We would be spending the night at Auntie Nilda’s house.  Nilda is Jennifer’s mom friend – they went to high school together.  She’s Filipino.

Christine woke up while we were waiting for the taxi.  The taxi driver got lost.  She said that she could take us there.

We got directions from Google Maps to Deer Park.  The ride was a long one since we got lost.  Nilda lives in Deer Park.  It probably should have taken about 40 minutes to get there.  But, we arrived about an hour later at 4:30 pm.

We said thanks and goodbye to Christine.

We waited until Uncle Lemuel got home before we ate dinner.  It was our first meal of the day, so we were really hungry. Auntie Nilda cooked pancit (noodles) with chicken, oysters and fish.  I had some pancit with bananas.  The food was good.

We chilled and used the internet.

We took a walk to the store.  It was a long walk, but w waneted to get some exercise.  Ivan and Jennifer got some food.  They would probably be hungry soon.

Ivan and Jennifer watched part of The Holy Man on the laptop.  Ivan and Jen had some Lean Cuisine meals.  I had a banana on toast.

We went inside the room.  It was nice that the room had it’s own heater – so it was nice and toasty.  Ivan used his laptop while Jennifer read her book Snow Blind by P.J. Tracy.  I went to sleep on Jennifer’s bed.  Ivan and Jen went to bed after awhile.

Auntie Nilda cooked boiled eggs and croissants.  I had toast with two bananas.  It was yummy!

Raffi and his friend Carl arrived at 10 am.  We all chatted awhile in the kitchen.

We put our backpacks into the trunk of Raffi’s car.  Carl is Australian and Raffi is Filipino.  We chatted in the car on the way to St Kilda’s.  They were partying last night and hadn’t slept in over a day.

We thanked them and said bye.

We checked in to the Pint on Punt Hotel.  It’s located right over their pub.

We walked to Soul Mama for lunch.  Ivan heard it’s a good Vegetarian restaurant.  Ivan got the eggplant in oil and chick peas. 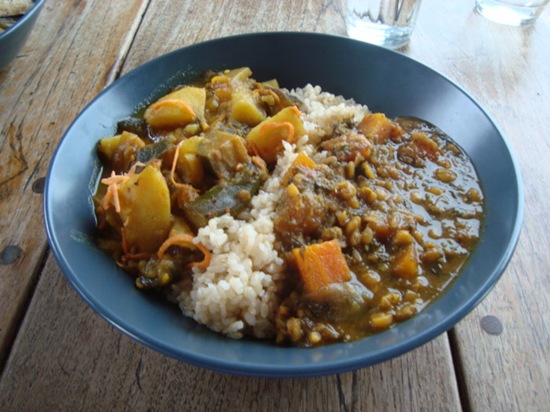 Jennifer got the eggplant curry and spicy dahl.  I got a salad with bananas.  The food was good and healthy.

We got a bus to the city.  We met up with a couchsurfer named Michael.  He wanted to speak to Ivan about stage hypnosis.  We went to the Victoria Library. 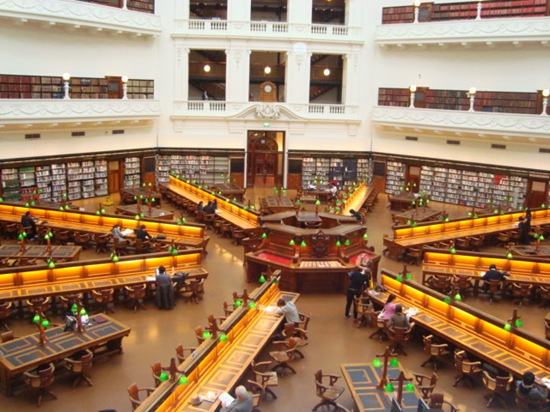 There was a free exhibit about books.  It was pretty boring.  We did get to see Ned Kelly’s armour.  It looked really bulky and heavy.

There’s free internet at the library for either 15 minutes in one area and 60 minutes on the 2nd floor.

We walked to a pub nearby to have a drink.  Ivan and Michael started talking about hypnosis.  Jennifer read some magazines.

Jennifer and I walked to the internet area at the library.  She was going to use the internet for an hour.  We waited in line for about 10 minutes for a free computer.

Ivan and Michael met us at the library.  We walked to a couchsurfing meetup at a pub.  It was kind of noisy in there.  You could talk but only to people who were nearby.  Ivan and Jen each had a glass of wine.  They were getting hungry.  They decided to order a chicken burger to share. 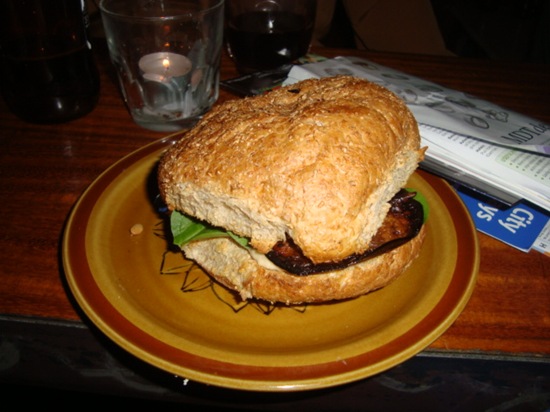 It tasted pretty good.  We chatted for awhile with Michael.

We said goodbye to Michael.  We wanted to get some dinner.  We walked around and saw a Nando’s.  Ivan thought we should try it.  It’s definitely more expensive than the Nando’s in Malaysia.  They don’t have Garlic Peri sauce there which is Jennifer’s favorite Nando’s sauce. 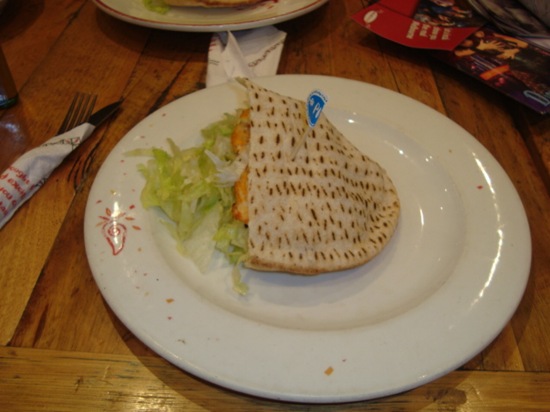 Ivan and Jennifer both ordered a chicken pita.  I got a chicken and banana skewer.

We got a bus back to St. Kilda’s.  We chilled and soon went to bed.