Ivan had set up a taxi the night before.  We left the Pint on Punt Hotel at 5 am.  We got to the airport and got our tickets.

Ivan and Jennifer grabbed the backpacks from the baggage claim.  We got a train to the wharf.  Jennifer took a nap on the ferry.

We got tickets for the ferry headed to Manly.  For the next two nights, we’d be staying with a couchsurfer named Joe and his girlfriend Lucy.  Ivan sent a text to Joe informing him that we had just boarded the ferry.

We met Joe near the silver shell at the wharf.  Ivan and Jen put the luggage into Joe’s car.  We headed to his house.

Joe showed us the room we’d be sleeping in.  Joe made Ivan and Jen some tea.  I had a banana juice with me from the store.  We sat outside and chatted.  Joe is a nice guy.  He does hypnotherapy.  Right now, he’s going to school for Nursing.

We got ready to head out.  We were really tired from having only a few hours sleep last night.  Later, we would meet Marvin for dinner in Surry Hills.

We walked to the mall to find something for lunch.  Ivan thought Moreish looked good.

Ivan and Jen got the cous cous, green bean salad and carrots to share.  I got the banana rice with vegetables and a banana soup.  The food was quite nice.

We boarded a bus headed to the city.  We wanted to walk around but our tiredness wasn’t helping.  Ivan suggested that we see a movie.

We walked to a movie theatre.  We told Marvin by text that we’d be watching a movie and then headed to dinner.  He said to meet at a restaurant nearby at 6 pm.  Ivan and Jen went to see The Ugly Truth.  I watched Aladdin on Jen’s iPod.  Ivan fell asleep during the movie.  Jennifer stayed awake to watch and thought the movie was good.

We walked to the restaurant Longrain.  It’s a Thai fusion restaurant.  We got there a few minutes before 6 pm.  Marvin was right behind us and said hi to Jennifer.  Jennifer thought he looked different than his picture.

Marvin has been to the restaurant before.  We were seated at a long table.  There weren’t that many people in the restaurant.  Ivan and Jen started off with a betel leaf with prawn.  It was really tasty with lots of flavors.  I brought three bananas and some crackers for me to eat.  Marvin ordered a pork dish that is covered with caramel sauce.  Ivan and Jen got a glass of riesling. 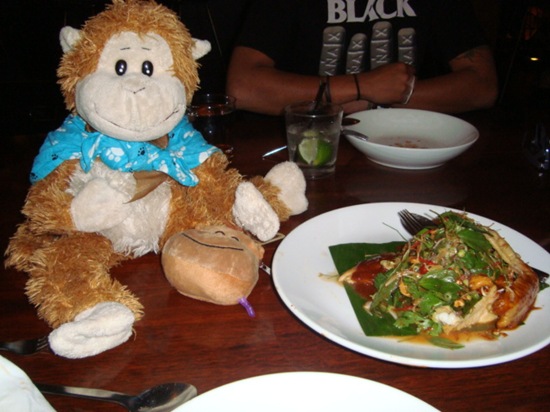 Ivan and Jen had organic chicken with coconut cream and greens and a great perth (fish) dish that melted in their mouths. 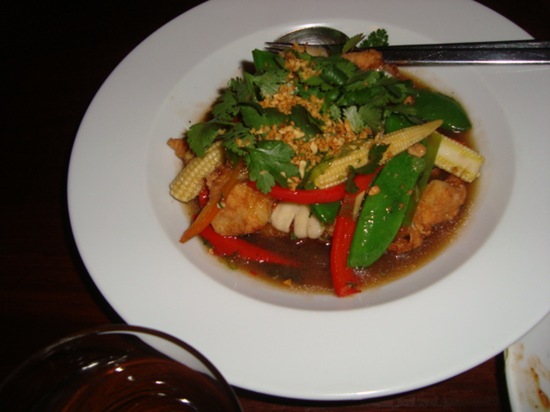 Marvin is a Disney special effects animator.  Ivan asked him lots of questions about his job.  We chatted for awhile.  It was great hanging out with Marvin.  He’s a cool guy.  He paid for the meal.  What a sweet guy!  Jen forgot to take a picture with Marvin.  Oh yeah, Ivan saw Barry Humphries sitting in the restaurant.  He acts as Dame Edna in England.  Jennifer has never heard of him, but she’s seen Dame Edna before.  Ivan wished that we were seated next to him during the meal.

We took a bus back to Manly.  We were so knackered.  Shortly after we got back to Joe’s house, we went to sleep.

We saw beautiful views of the water while we walked along it.  Lots of nice condos and houses are located right by the beach.  We couldn’t find anything to eat.

I had a chicken and banana pita.  The food was really nice.

We walked to the mall.  We bought some food for dinner later and some wine.  We walked back to the house.

Ivan and Jen used the internet for awhile.  They cooked their Lean Cuisnie meals.  I had a few bananas.

We all get ready to go out.  Ivan read about a housewarming party in Manly from the Couchsurfing forum.  So, we headed out the door to the party.  We were thinking of taking a bus, but it was taking too long to arrive.

Ivan hailed a cab.  We got to the party and it was filled with lots of young people.  It looked like a college party.  It was really loud and everybody seemed to be in individual groups.  Ivan and Jen wanted to leave.  We walked to the Pier.

We went inside a pub to have a drink.  Ivan and Jen each had a glass of red wine.  The band playing was okay.  We decided to take a taxi back and call it a night.