Ivan and Jennifer rode around Ubud to do more shopping.  I went to the Monkey Forest to train before the Monkey Race.  The race begins at 1 pm.

Ivan and Jennifer had lunch at a French restaurant on the Main Road.  They both can’t remember the name.  It’s owned by a French man and his Indonesian wife.  Ivan got a mushroom soup while Jennifer got a French Onion soup. 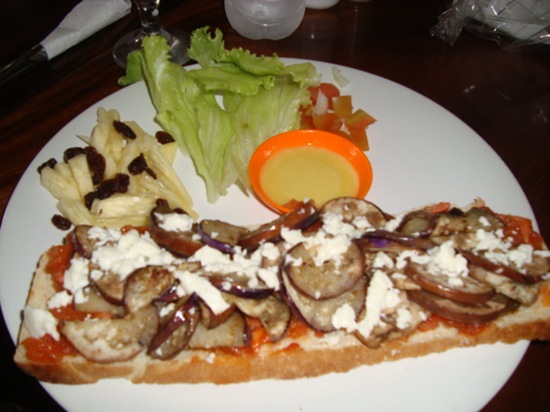 Ivan ordered a dish with bread with vegetables and cheese on top.  Jennifer got a vegetables crepe.  The food was quite good.

Jennifer wanted to get a tattoo.  She thought that maybe somebody could draw a design for her.  The guy at the tattoo parlor didn’t even know what anime was.  She printed a picture from the internet to give him an idea.  He called the tattoo artist to come.  He didn’t even make a new design he just traced it.  Plus he didn’t know what a backpack was.  It took forever and Jennifer was pissed that they had wasted hours on it.  She’s going to seek an actual artist to make her a tattoo design.

The race turned out quite fun.  I finished 30th out of 50 monkeys.  Not too shabby!  At least I did win a prize of two bananas.  So, I guess it wasn’t a bad day.  I always have fun with my monkey friends.  That night, the monkeys had a big feast prepared for me.  It was my last night in Ubud.  I was really sad.  But, we danced and ate lots of great banana dishes and fruits.

Ivan and Jennifer went to a Kecak Fire and Trance show.  It was only $7.  They got their seats.  There were a lot of people there.  Some people ended up sitting around the show area in a semi-circle.

About a hundred Balinese men come out and start making a circle.  They make “cak” sounds that sound like a train coming.  They do chant some Balinese words. 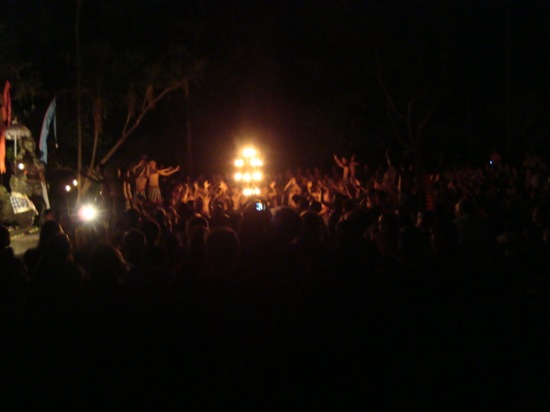 There’s a big tree in the middle filled with candles lit.  Jennifer said it was quite hypnotizing since it was kind of repetitive.  There was also some Balinese dancing.  There was guys dressed up with masks and they fought and killed somebody.  At the end, there’s a guy who’s supposedly in a trance from the “cak” sounds and the singing.  They put a big bonfire in the middle.  The guy was in a trance and started the fire all over.  Thank goodness, Ivan and Jen weren’t sitting in the front row.  They were surprised nobody got scared and screamed.  He kept doing it a couple times.  There were two men who kept sweeping the fire back into the middle.  At the end of the show, a guy asked since the fire is still there, Did anybody want to try?  Nobody did.  Ivan said it’s Mind over Matter walking on fire. The show was okay.

Ivan and Jennifer went to Nomad’s for dinner.  They ordered the same tapas – chicken sisit, chicken satay and grilled fish pepes.  Ivan ordered the tuna while Jennifer got the pumpkin ravioli.

They went to the Laughing Buddha Bar.  The Bali Blues Brothers were playing there, which were the same band we had heard at the Jazz Cafe. It was free to watch them and they sounded really great again!  Ivan and Jennifer each had a drink and then went back afterwards.