Ivan and Jennifer had the free breakfast at the guesthouse on July 13, 2009.  I had banana with honey and toast.  We packed everything up in our backpacks. 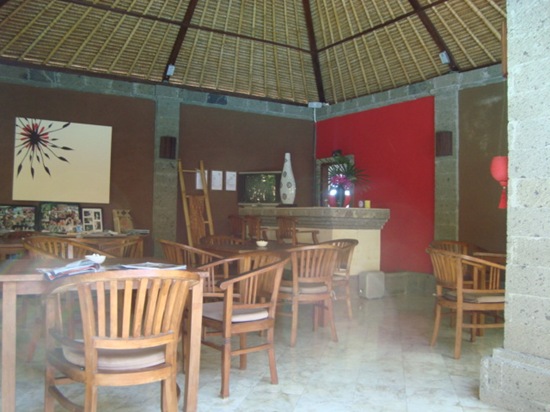 We checked out of the lovely Ellie’s Guesthouse.  Dave and Caroline (the couple who run the guesthouse) are so super friendly.  They know a lot about the good restaurants in Nusa Dua.  We definitely enjoyed our stay at Ellie’s.

We took a taxi to Kuta.  Ivan went to look for a place while Jennifer and I sat at the Hard Rock Hotel.  They were playing videos in there like Michael Jackson’s Dirty Diana song.

Ivan found a place.  We walked to Ayu Beach Inn.  We checked in there.

We used the internet cafe close by the Inn.

We had decided to do a cooking class called the Anika Cooking School. The published price was 65 dollars plus tax which is laughable, but Ivan managed to talk them down to 40 dollars including tax which is still too much, but they did say we would learn to cook 10 dishes, so we were all quite excited about it.

We got to the class and sat down with the other people that were already there. We sad our hellos, and they all expressed their surprise at seeing a monkey at a cooking class. Not sure if they think that all monkeys are natural cooks or something…I mean my dad may be a pretty good chef with his banana pizzas but I’m still very much a student!

The teacher came in and started explaining about all the herbs and spices we were going to use in the cooking. After he described it he passed it around so we could smell it. It was interesting at first, but after a while it got boring…he was explaining too much what each one was, and there were so many!

finally he finished, and we moved onto the tables to get ready to start cooking. Myself Ivan and Jen were wondering where all the equipment was – usually in a cooking class you get assigned a personal stove and all your own utensils so that you can cook everything yourself. However here there was only one stove and not much food laid out.

Well..that was a complete lie. Here is pretty much what happened with each dish.

The teacher would then cook the dish – and maybe a few of us were allowed to stir the ingredients in the saucepan. 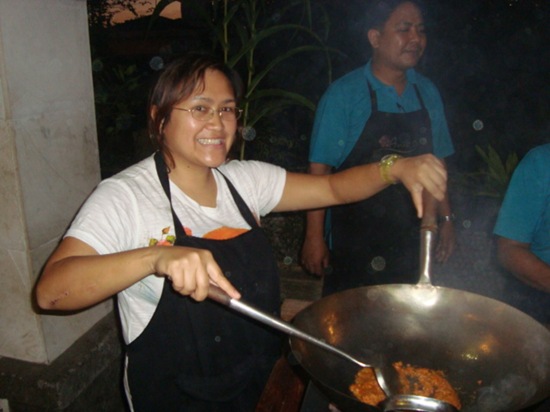 We were not happy at all – it was not a cooking class..it was a cooking DEMONSTRATION! The desert – which to be fair was absolutely delicious – was cooked while we were eating our main courses…so we didn’t even get to see them make it, let alone make it ourselves!

The money we had paid for the class could have instead gone towards having a posh meal out somewhere. We learnt nothing from the class. Still at least the food that was cooked for us was tasty. But then again, it should be for the price we paid!

We were reading the comment book, and everyone else who had done the class really loved it..but they hadn’t done many other cooking schools like we have, or maybe that were just too polite to say that they didn’t like it.

We drove back to our Inn.  We used the internet for awhile.

We drove to where the nightclubs are in Kuta.  We checked out Bounty and Paddy’s.  It was really loud with lots of young Australians in there.  Jennifer thought it was a bit too loud. 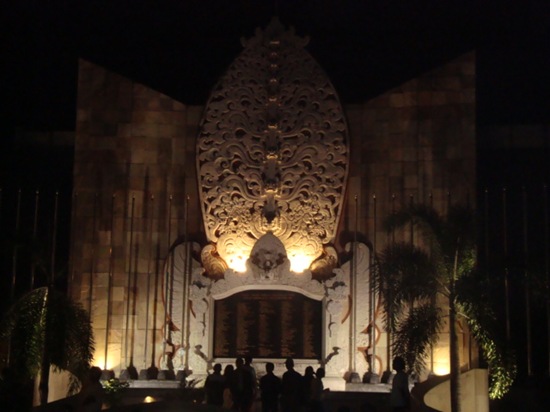 We saw the memorial for the 2002 Bali bombings.  It’s where old Paddy’s once stood.

We sat down at the Maccaroni Restaurant and Lounge.  Ivan and Jennifer shared a bottle of Hatten Rose Wine.  I had a Banana Daiqurri Mocktail.  We chilled there for a little while listening to the cool music at the lounge, and watching the people walk by.  Afterwards, we drove back to the Inn to get some rest. 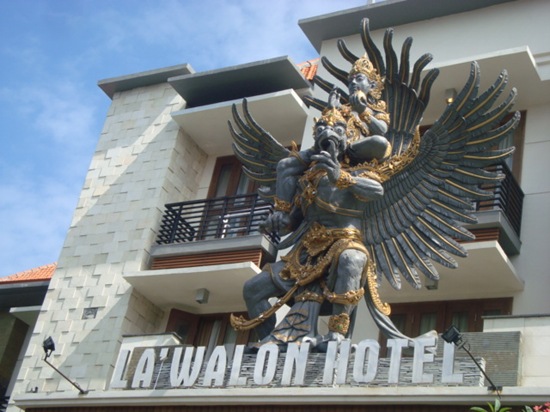 We checked in to La Walon Hotel right down the street Poppies I.  It was a lot nicer hotel for not much more money.

We rode the motorbike to Water Bom.  It’s a water park.  If you remember we went to the one in Jakarta.  First, we had lunch at one of the food places in the water park.  Ivan had tuna on seaweed bread.  I had a banana and honey sandwich. 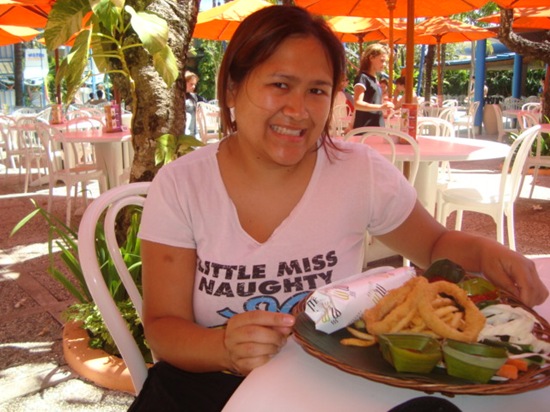 Jen had a grilled tuna pita.  The food was good.

We went to the Lazy River.  I really like it since you don’t really get wet.  They do have waterfalls and little fountains but, it’s easy to avoid them.  I spent all day just chilling on a float in the Lazy River.

The park is bigger than the one in Jakarta.  Both parks are well maintained and clean.  There were a a lot of people there mostly Australians.  There are lots of Australians in Bali.  An Indonesian man in Yogyakarta said that Australians  are like mosquitos because they are everywhere.

Ivan and Jennifer rode on the Macaroni Tube and the Raft River at the Water Tower.  Some of the rides are single rider only or a few you can ride two in a tube down the slide.  They thought it was a lot of fun.

The more popular rides had a long line.  Ivan thought they should try it in a few hours when the park got quieter.

We all went down the Lazy River together.  Ivan and Jennifer were trying to read their books.  It’s hard with the waterfalls and fountains though.

Ivan and Jen chilled in a small pool reading their books.  They rode more rides.  The park doesn’t have that many rides.

Ivan and Jennifer joined me in the Lazy River again.  The river is a lot faster than the one in Jakarta.  But, it does have a ride going into it. 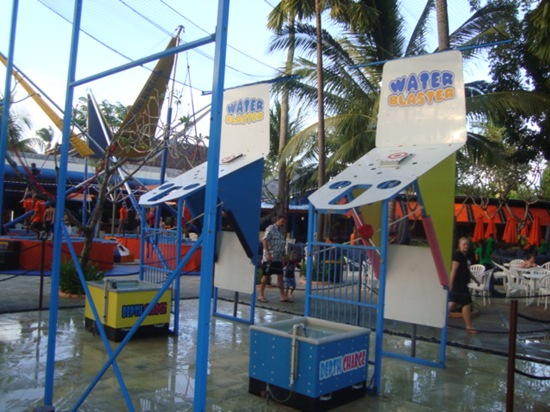 We all then had a go on the water blaster. They got 20 Balloons each to throw at each other.  You have to place the water balloon in this container and then you pull it back and let go.  The object is to hit the Bulls eye on the top of the Water Blaster.  It makes a Bomb sound and then shoots water up from the small container in front of it.  Jennifer won by hitting the Bulls eye twice.

It was getting quiet in the park since it was 4 pm.  The park closes at 6 pm. 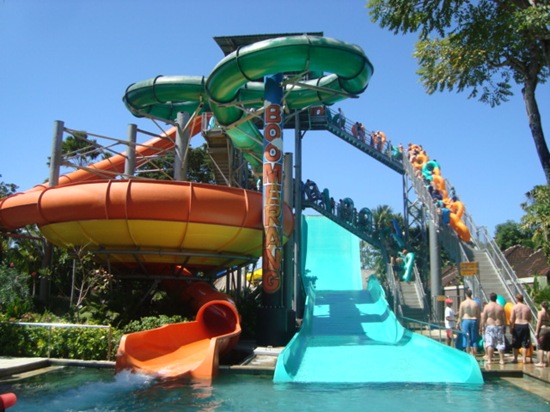 Ivan and Jen rode the Boomerang which is a lot of fun.  Then, they went on the Super Bowl.

I enjoyed myself on the Lazy River.  Ivan and Jen had a fun day as well.  It’s much quieter later in the day.

We went to TJ’s Mexican Restaurant for dinner.  It was really crowded in the restaurant.  We put in our order.  Ivan and Jen got a bottle of Hatten Rose.  Ivan and Jen shared the guacamole.  The food still hadn’t came after about 30 min after they finished the guacamole.  The server came over and told them that chicken fajitas weren’t available.  Ivan ordered the Mole Poblano instead.  They were really mad since they had waited so long and were almost finished with their wine.  I got the banana tacos.  Jennifer got the chicken tacos.  The food was actually good but bad service.  I guess the kitchen doesn’t communicate with the staff there.

We went back to the hotel to chill.  Jennifer is taking a surfing class in the morning so we decided to take it easy for the night.