Ivan and Jennifer had the free breakfast in the hotel on June 8, 2009.  I had a nice banana to eat.

I went to the Monkey Forest to be with my friends.  It was my last day in Ubud.  I was really going to miss my buddies.  We hung out and also went to visit the tourists.  It was nice to get free bananas.

Ivan and Jennifer went to the life drawing class at  Pranoto’s Art Gallery.  It started at 11 am but they arrived at 11:30 am.  The life model was a male and he was nude.  Ivan and Jennifer bought oil pastels, colored pencils and paper from a store across the street.  They did three sessions of drawing the model.  He did two different poses.  Some of the people in the class drew very well and some only okay.  Ivan and Jennifer did alright….well that’s what they thought anyway – I cant wait to show these pathetic attempts to my monkey buddies in the forest here in Ubud. 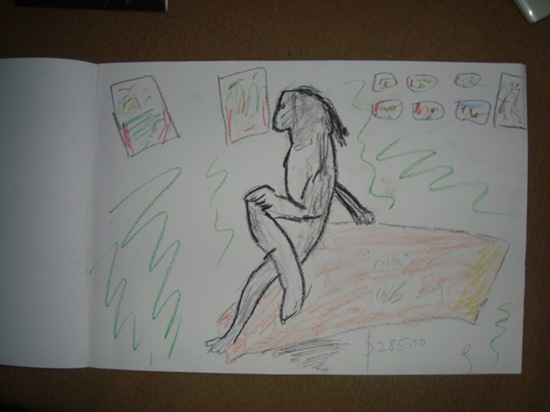 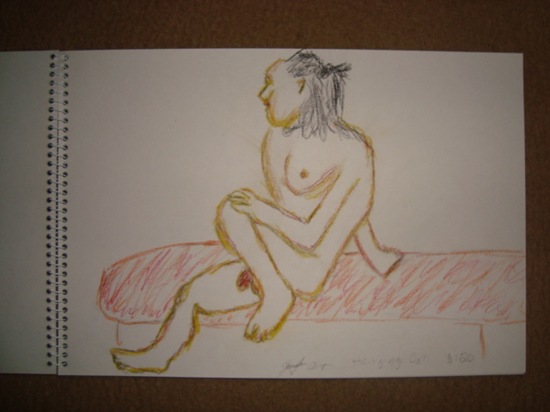 They’re not too good at drawing….but don’t tell them I said that.

Ivan and Jen saw Kue, the cake shop where the Chocolate Mouse Cake is made that Ivan and Jen have had at Nomad.  The shop did have chocolate, cakes and food there.  They decided to have lunch there.  Ivan started off with an amazing tomato and pepper soup.  At one point, a big group of Hindu people were walking down the street. 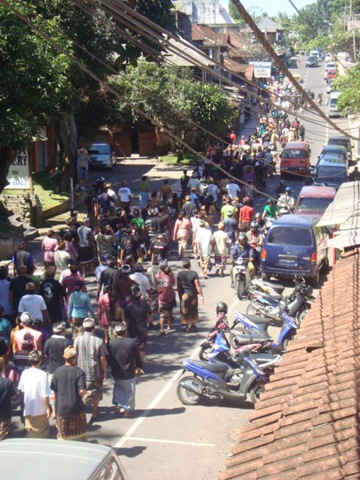 Jennifer wasn’t sure but there was a float at the front of the big group – so maybe it was like a parade. 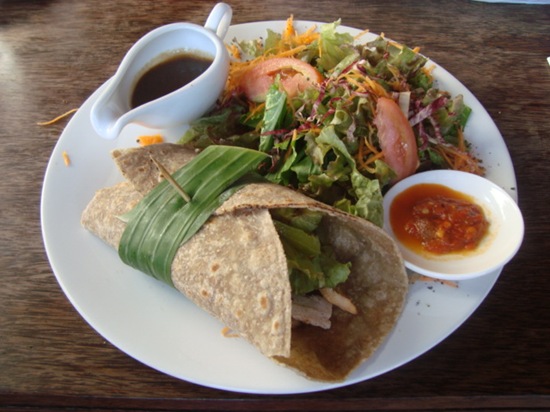 They each ordered a chicken wrap which tasted alright.  Ivan wanted to try some chocolate truffles.  They each got one but it only tasted okay.

Ivan drove to Sedona Spa.  Ivan and Jennifer each got a facial for an hour. 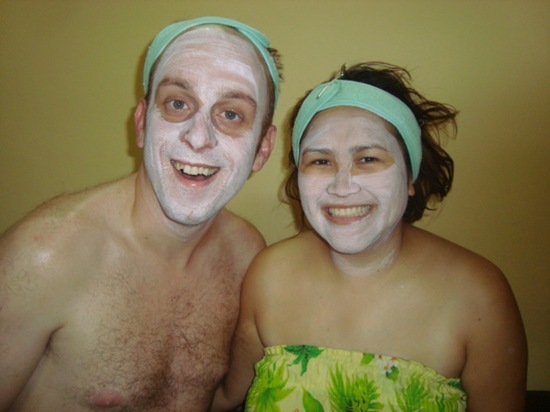 It was Ivan’s first time.  It was very relaxing. 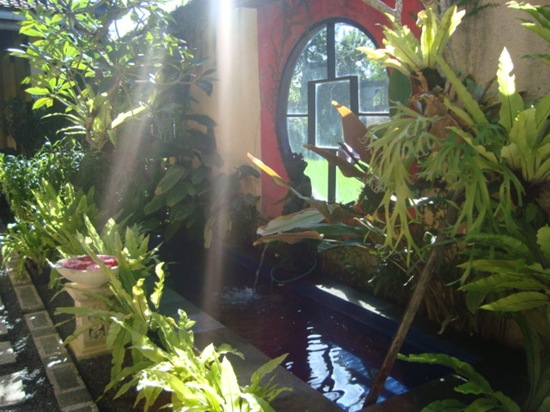 The Sedona Spa is a great place to get reasonably priced spa treatments.

Ivan drove to a place with amazing views of the paddy fields. 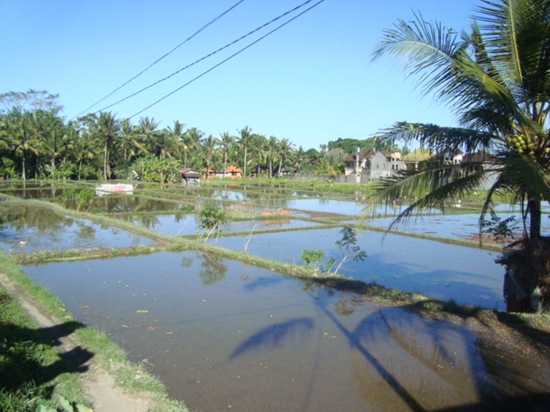 They were riding towards Sari Organic.  There was only a small pathway to the restaurant.  Most people were walking it.  Ivan read that it was a recommended walking tour in his Lonely Planet book.  It really does have beautiful scenery.  They arrived at Sari Organic.  Ivan and Jen each ordered an alcoholic drink. 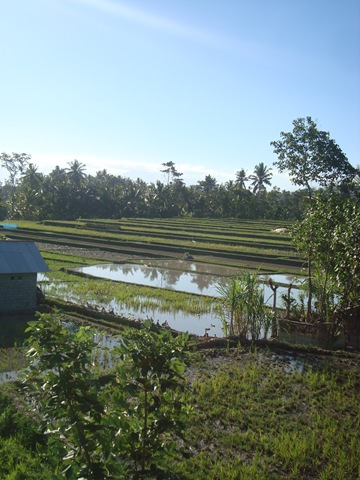 They drove back to the town.

The other day when Ivan was searching the internet for Little K, he found a site listing a gourmet raw food dinner night.  It was actually for tonight.  It was available for 7 people only.  Ivan wrote Leah to see there was still room left for 2 more people.  Leah wrote back and said they could come by.

I had a big feast prepared for me in the Monkey Forest.  Everybody was sad that I was going.  It was lots of fun.  I saw traditional Balinese dancing.  I had a glass of banana wine (shhh, don’t tell Jennifer).  The food was really good – lots of banana dishes, watermelon, strawberries, bananas, and banana rice pudding for dessert.  I danced around a lot even though I didn’t know the Balinese moves.  It doesn’t really matter though.  All the monkeys just like to have fun.

Ivan and Jen drove to Leah’s house.  Leah lives in a lovely one-bedroom house.  She’s an American from Washington D.C.  She’s the raw food chef that created the dishes at Little K and other places in town.  Two other Americans were there – Cameron and a girl (Ivan and Jen couldn’t recall her name though).  They both were living in L.A.

Leah was plating the first dish.  She said that one of her friends Espy was on her way.  She came a few minutes later.  Espy is an Indonesian woman.  Everybody was chatting about traveling, raw food, and California.  Leah served some coconut water which tasted good.

Everybody went to sit at the table.  Leah was done with the dishes.  Leah’s friend Daphne arrived.  There was salad on the table.  The dish had lots of raw food on it. 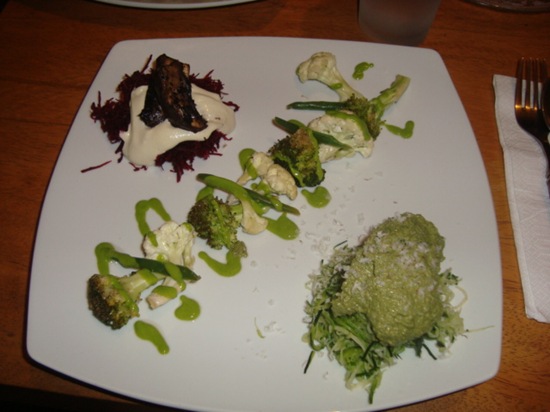 In the middle of the plate, there was cauliflower, broccoli, and beans with a green sauce.  There was also shredded cucumber with a great pesto sauce.  Then, a shredded red vegetable with a fettuccine sauce with mushrooms on top.  Ivan and Jennifer also helped themselves to the nice salad.  It was delicious food!

Mostly everybody knew each other, except for Ivan and Jennifer.  All the women except Jennifer were locals.  So, they were listening to their funny stories a lot.  Daphne used to live in L.A. and talked about her numerous road trips to Las Vegas.

It was time for dessert. 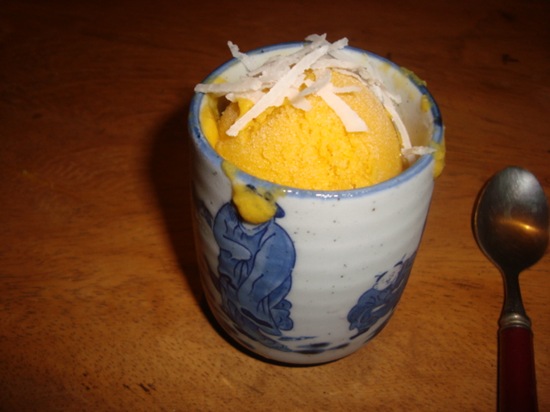 It was mango sorbet with coconut shavings on top.  Ivan and Jennifer loved it!  Leah also had a slice of cake with banana frosting on top.  Everybody had a little bit of it.  I wish I was there to try it but I would have eaten all the frosting!  Ivan and Jennifer thought it was good.

It was a great night of tasty raw food and good company.  Leah had invited Ivan and Jennifer to open mic night.  But, after using the internet for a while, Jennifer’s scars were hurting.  They just wanted to get some rest after that.