Local Food, A Museum and Italian Food in Solo

Ivan, Jennifer and I had the breakfast buffet at the Puri Artha on June 21, 2009.

We checked out of the Puri Artha Hotel.  We really enjoyed our stay there.  It’s such a beautiful place to stay with friendly staff.

We got a taxi to the train station.  The train ride took about an hour to Solo from Yogyakarta.  The seats were hard plastic as it was just a local train.  But, it didn’t really matter much since it was such a short journey.

We hopped in to a taxi to our hotel.  We checked in to the Ibis Hotel.

We were all very hungry.  We walked next door to the Novotel.  The restaurant was serving a buffet Sunday Brunch.  The food looked good and was a decent price, so we grabbed some food.

Ivan worked on his blog.  I watched tv with Jennifer.  I worked on the blog.  Ivan walked around the city.  We all watched Jurassic Park on the tv in the room.

Ivan set up that we would meet a local guy from couchsurfing.  Bayu wanted to meet at Galabo.  Galabo is a street that is shut off to traffic at night. 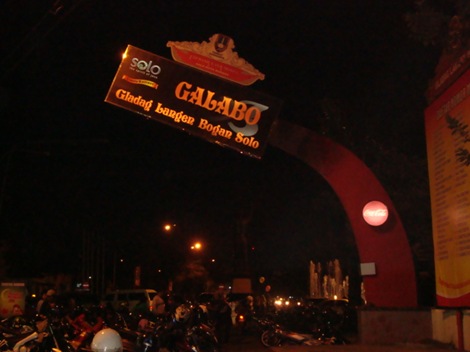 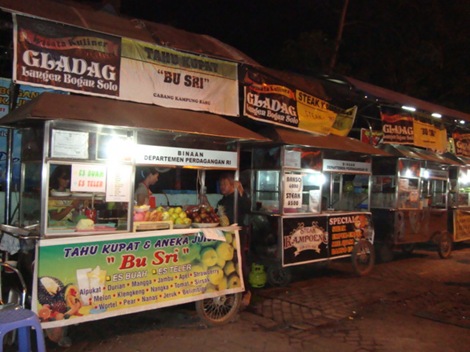 There’s train tracks around the city.  The train doesn’t run at night.

We met up with Bayu and his friend.  The tables were practically filled up.  An employee put down a mat over the train tracks.  Bayu said he would find us some food.  I started munching on my bananas.  I wasn’t sure they would have any good dishes.

Bayu ordered some local food for Ivan and Jennifer. 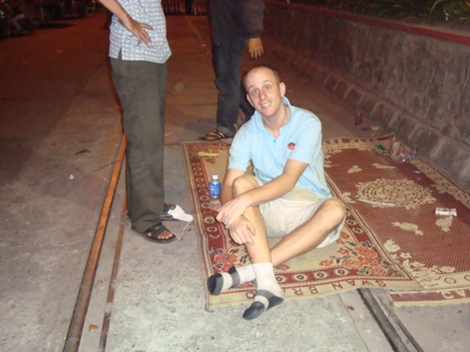 We had dinner on the train tracks.  They had Nasi Liwet , selat (the salad), and Gempol Pleret Ice. 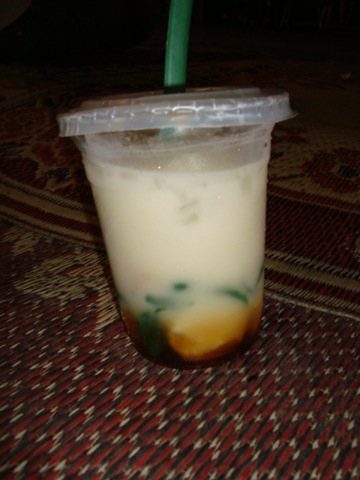 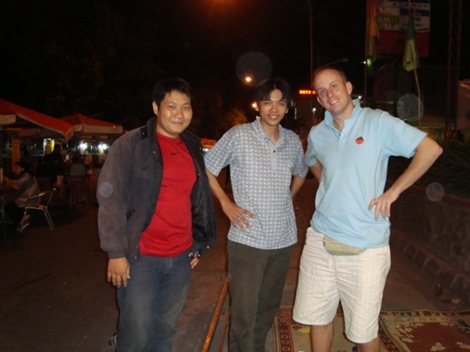 We said goodbye to Bayu and his friend.  We took a becak back to the hotel. 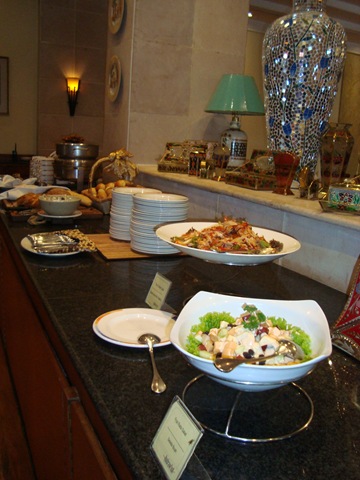 Ivan, Jennifer and I had breakfast buffet at Novotel Hotel on June 22, 2009.  The food was good.

We got a taxi to the Kraton Museum. 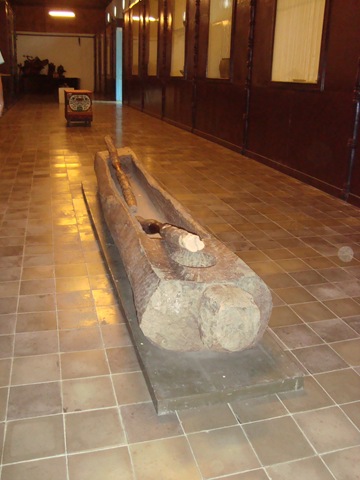 There are so many things in the museum like canoes, gongs, umbrellas, cannons, old stage coaches and shadow puppets. 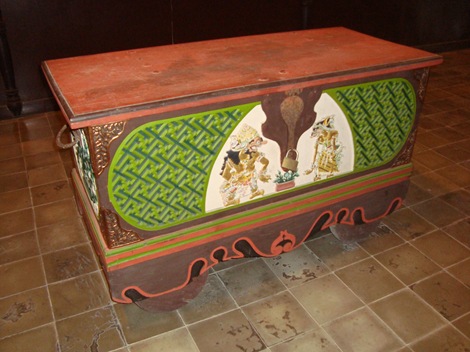 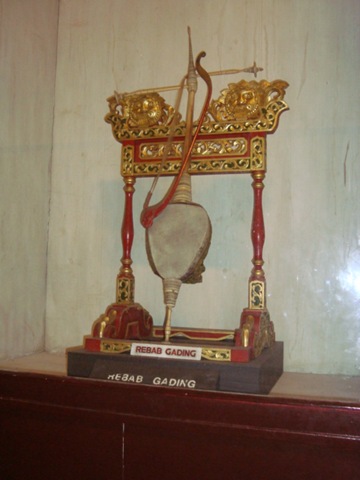 It was interesting to see all the items. 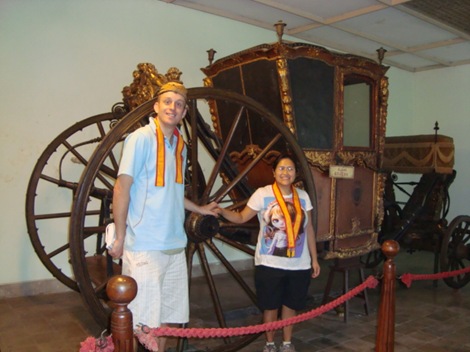 There was a guy let you wear his hate and sash to wear by the stage coach.  He took pictures of Ivan and Jennifer – and we gave him some money as a tip.  I saw two statues holding bananas. 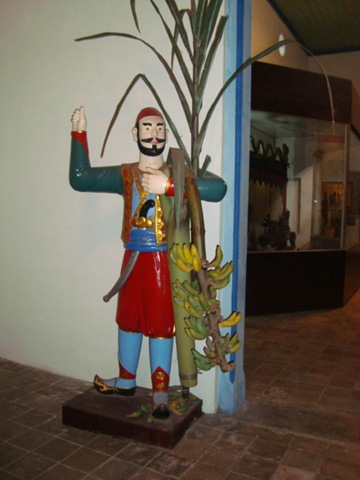 I was excited and grabbed one of the free bananas.  But, the bananas weren’t real.  The statue was just a tease.

Next, we rode a horse and cart around the kraton itself. We got the horse and kart to drop us off at the central market where we went into a batik shop to look at the batik. There were lots of nice shirts in there but most of them were not batik – just normal shirts with nice prints on them. Of course though, the real batik ones were really expensive.

Ivan had read in the Lonely planet about a place that has live cobras that can be killed in front of you and then eaten. We decided to check it out, and so jumped into a becak and set off looking for the snake man. He took us to the street where he thought it was  – but couldn’t find anything, and so we drove for a lot longer, until Ivan realized that we probably weren’t going to find it and so went back to the original street we were on. It was at this point that we came across the highlight of the day – for me anyway. 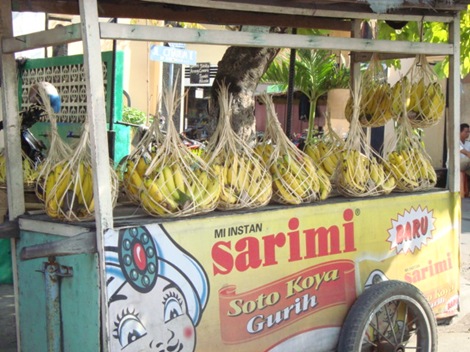 Ivan brought a basket for me – at only 10,000 rupiah (1 us dollar) for the entire basket, they were probably the cheapest bananas I have ever brought! As we were walking around after buying the bananas, we actually did find the snake stand – but the snake man was on his holidays so was not there!

Back at the hotel I checked out the bananas Ivan had brought for me. 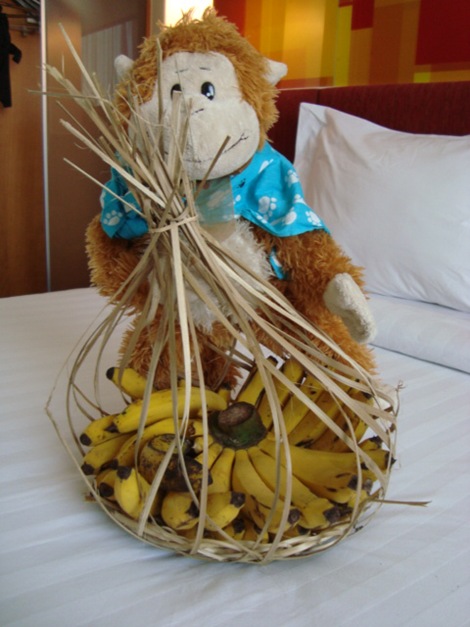 I had enough bananas to restock my main supple, my emergency supply AND my secret stock! Plus I had a few left over to give to Ivan and Jen.

That evening went to an Italian restaurant nearby called O Solo Mio. All 3 of us ordered pizzas. The pizzas arrived with packets of tomato sauce, which was something none of us had seen before. 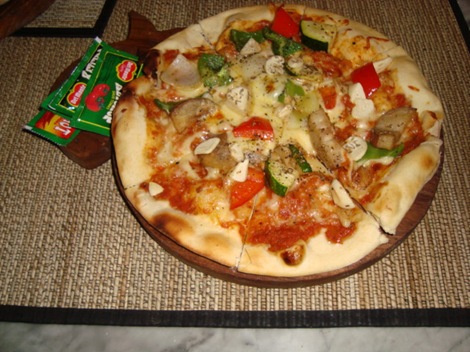 Yes it may look tasty – but the pizzas were all very average tasting – I didn’t even bother eating most of mine, and just ate some bananas I had brought with me – they were so much tastier than the pizza!

We took a walk along the road to where the Solo fairground was called. I would love to tell you the name of the fairground – but I have since ripped the Solo info page out of my Lonely Monkey guidebook – you see once we leave a town we rip the pages out of the guidebook because we don’t need them anymore and it makes the book lighter!

At the fairground was a troupe in a theatre that was doing a show. We guessed it was a traditional Indonesian story but of course we couldn’t understand as it was all in Indonesian. They was some fighting and some singing..and Jennifer found it a bit boring, so we didn’t stay long, and after a while walked back to the hotel.

Ivan went to buy some wine so we could have another Banana and Wine evening. After the success of the first one, we were all looking forward to this one.

I presented a varied selection of bananas from my collection, and we all enjoyed eating them while drinking some nice wine.