Ivan, Jennifer and I took a taxi to the train station on June 23, 2009.  We wanted to get from Solo to Surabaya.  Unfortunately, the train was sold out except three Economy seats that has no air-conditioning.  Jennifer said she would rather ride the bus than sit on a train with no air-conditioning. Ivan didn’t mind so mind, but i sided with Jennifer and so Ivan was outvoted two to one. You see its very important that my bananas are not kept on hot environments – they lose their quality you see.

We took the bus at 8:45 am.  Ivan and Jennifer watched shows on the laptop.  I took a much needed monkey nap.  Lunch was included with the ticket – but it wasn’t anything special.  We arrived in Surabaya around 2:50 pm.

We checked in at the Garden Palace Hotel.  We chilled in the room and had a snack.

There’s a restaurant right by the hotel called Cat’s Pajamas.  We went there for dinner.  We sat down on a big bed.  The restaurant was running a special of buy one, get one free for tapas. 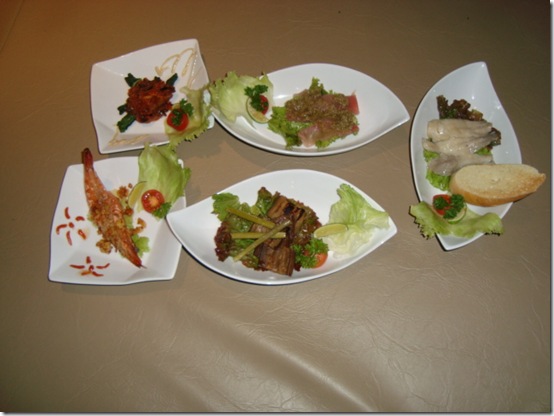 Ivan and Jennifer ordered 5 different tapas dishes – carpaccio with salad, tuna with tomato, prawn with salad, grilled fish and eggplant and asparagus salad.  I ordered a few banana tapas – bananas with honey and peanuts, banana stuffed chicken and banana salad with a light vinaigrette sauce.  The food was alright.

Ivan, Jennifer and I checked out of the Garden Palace Hotel on June 24, 2009.  We stored our backpacks with the hotel.

We got picked up around noon by couchsurfers Steve and Rose. They contacted Ivan after he put a request on the Surabaya Couchsurfing message board for somebody to show us around Surabaya. Steve is an English guy and Rose is his Indonesian wife.  Everybody was hungry so we drove to the closest mall.  We went to the food court.  I ordered fried bananas with a peanut sauce.  Ivan ordered rice with chicken while Jennifer got noodles with chicken.  Jennifer was supposed to add the soup into her noodles.

She wanted dry noodles though.  She added lots of the sweet soy sauce that was provided by the restaurant.  The food was tasty.

Steve drove us to their custom built house.  Rose designed it herself.  It was still under construction.  They are building a pool right in the living room.  So, once it’s completed, you’ll see a pool right when you walk into the house. 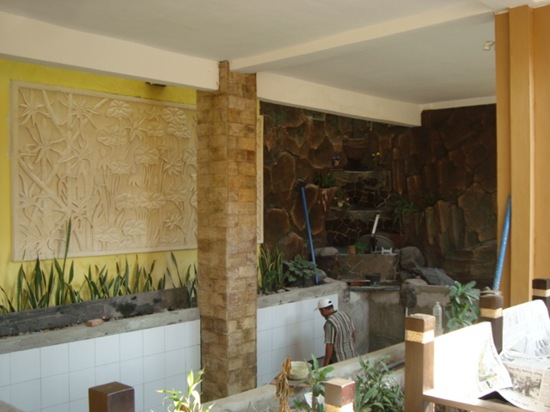 The house has lots of windows so it gets a lot of natural light.  It’s a beautiful place!  Steve and Rose offered us Indonesian snacks.  Rose gave me a banana and I was happy!

Steve drove us around his neighborhood.  There’s lots of custom built houses being built.  There are no restrictions to what you can build there.

Steve teaches at English First – so he had classes to teach that night.  He dropped us off at the mall near our hotel. We shopped for awhile. 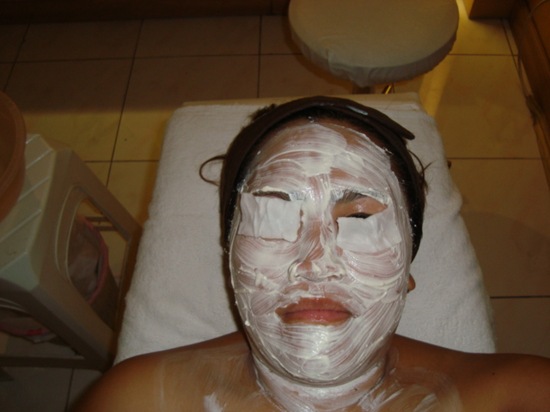 Jennifer had a facial and a wax.

We got our backpacks out of the storage area at the Garden Palace Hotel.

We would be staying at a couchsurfer’s house named Lupe.  She lives with her husband at her mom’s house.  Lupe and her husband picked us up shortly after 7 pm.

We drove to a mall since Lupe was meeting friends.  Surabaya has so many malls.

We sat down at a sushi restaurant.  Ivan and Jennifer ordered a few sushi dishes.  I ordered chicken & banana teriyaki with rice.  The food wasn’t very good. 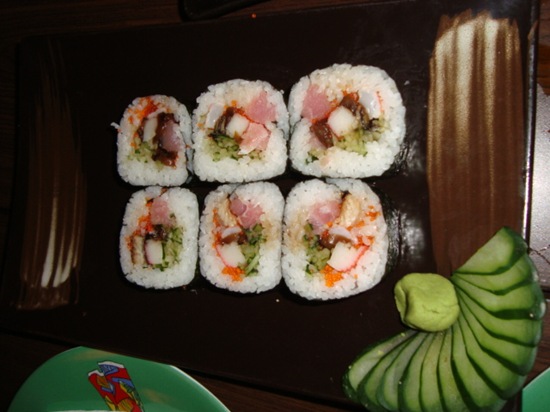 The sushi had no flavor.  A lot of Lupe’s friends arrived.  There were also people from couchsurfing.  Jennifer made a new friend, a girl named Gloria.  They both like to create things.  Everybody was chatting. 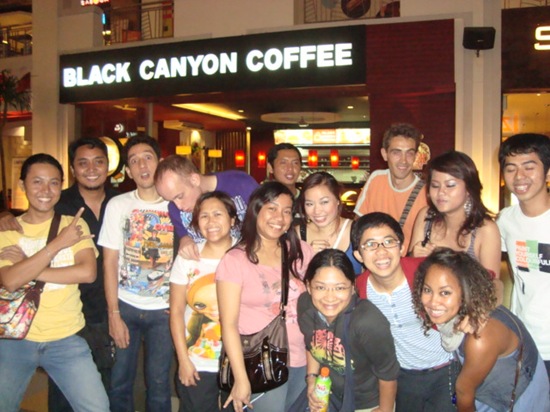 The group wanted to go either bowling or karaoke.  By the time, everybody was ready to go, it was too late for bowling.

We went upstairs to head to karaoke.  It was a Family KTV room.  We got a big private room for an hour.  The machine grades you on your singing ability.  Ivan and Jennifer sang a lot of songs.  Nobody ordered any drinks.  Ivan and Jen were singing Bohemian Rhapsody.  It was almost the end of the song and one the girls stopped it.  She said it was an accident.  I thought it was rather rude.  It was fun watching everybody sing.

A few people in the group wanted to go inside the nightclub Foreplay.  It was expensive to get in since there was an event going on.  Ivan and Jennifer thought they would pass on it.

Lupe and her husband drove us to their house.  Lupe’s mom is traditional.  So, Ivan and Jennifer had to sleep in separate beds. 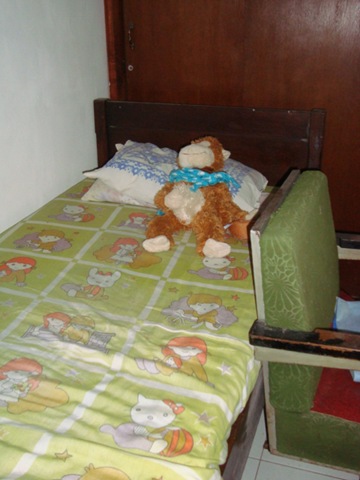 I got my own bed all to my monkey self!  It was a little hot though since there was only a fan in the room.