Ivan, Jennifer and I had lunch at the Chandra Restaurant on June 20, 2009.  Ivan and Jennifer both had the Nasi Goreng.  I had noodles with chicken and bananas.

We took a taxi to the Sultan’s Palace.  Unfortunately, we couldn’t go in since it was closed.  It seems a lot of the tourist attractions close around 2 pm.  That’s way too early for us!

There was a man who wanted to guide us.  Our guide took us to a shadow puppet place right near the Sultan Palace called Classic Wayang.  The shadow puppet’s design is made with a spoke of a bicycle.  It can take over two weeks to create it. 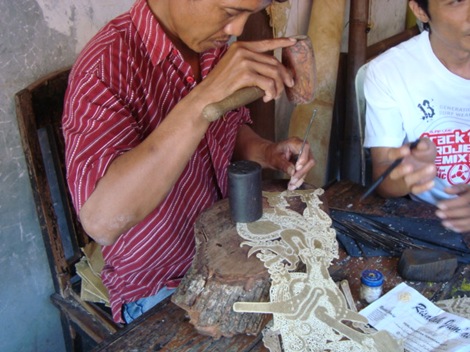 The shadow puppet is made out of strong buffalo skin.  Then, an artists paints it.  The painting can take a week to make.  It can take longer if the puppet is larger.  One of the guys who does the artwork showed us finished projects. 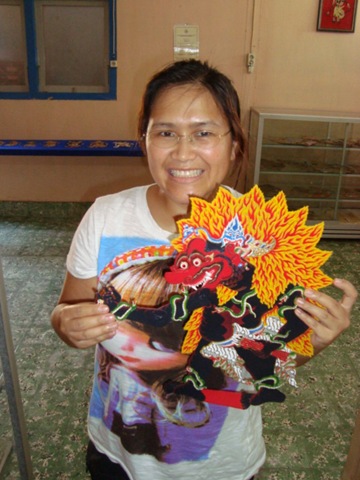 Jennifer really liked the shadow puppets.  She was thinking of buying one.  The guy said that since they live near the Sultan Palace for free they can charge what they like.  The guy wanted 450,000 IDR (about $45 USD).  We said that we might come back to buy it.

We walked to the Water Castle.  We almost didn’t get to go inside.  The guide talked to the guy who was closing the gate.  Somehow, the guy said we could go inside. 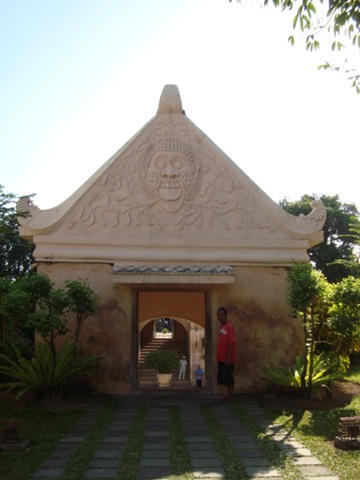 It’s a palace that was built in 1758 by Sultan Hamengkubuwono I for the Royal family.

It’s mostly ruins now because of an earthquake.  But, you can still see the pools and arches.  It’s interesting to imagine what it once was.  But, there’s really not much there to see.

We walked further on.  There was a shop selling artwork and shadow puppets.  The puppets weren’t the same quality as the Classic Wayang workshop.

Next, we went to the Bird Market. 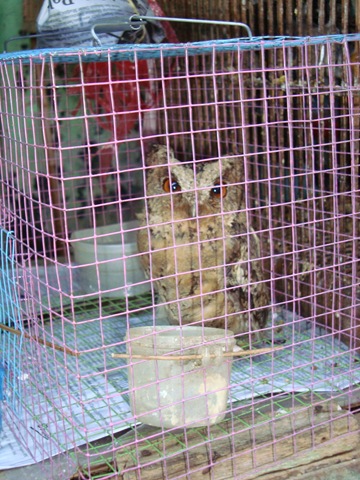 There’s lots of illegal animals for sell like owls, bats and snakes.  Ivan and Jennifer thought the bunny rabbits were so cute.  They are pretty adorable. 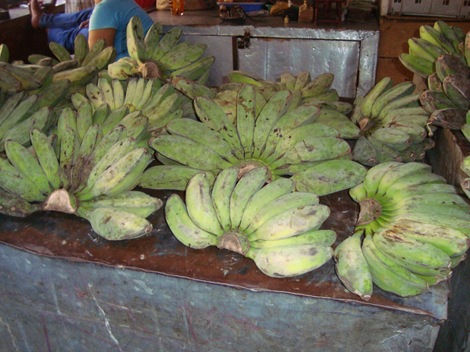 I was more interested in the bananas that were for sale.  It does smell in the market though. 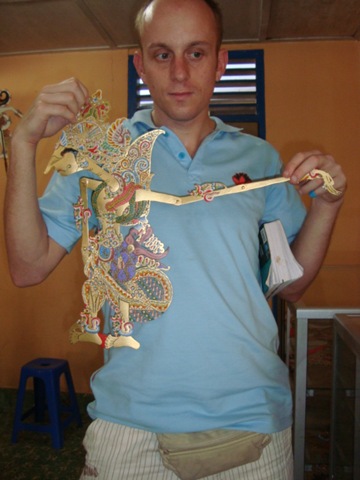 The guy said he couldn’t sell it for that price. Ivan acted like it was all the money he had left.  The guy said there was an ATM nearby.  We started to walk out of the workshop.  Then, the guy agreed on the price.  The shadow puppet is named Rama.  The guy said he would e-mail Jennifer about the meaning of Rama.  Although, she still hasn’t gotten an e-mail from the workshop.  The guy rolled up the shadow puppet and wrapped it in cardboard.  He said it would be fine rolled up for months on end.

We said goodbye to our guide.  Ivan thinks he got a commission for the shadow puppet.  He did tell Jennifer that the quality was better at Classic Wayang. 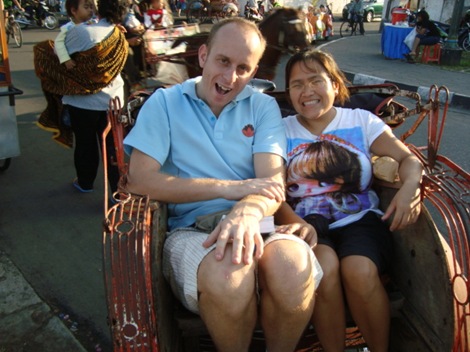 We took a becek to the Alun Alun park.  Ivan and Jennifer rode ATVs.  I rode with Jennifer.  We went around the grass area in the park.  It was pretty fun! 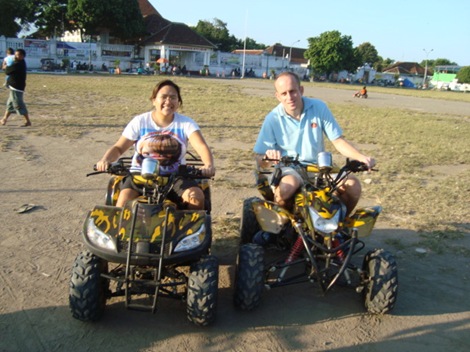 Ivan read that there are two Banyan trees in the park.  Somebody puts a blindfold on you and you have to walk to the other tree.  If you reach the other tree while blindfolded, you will have good luck.  We didn’t have a blindfold, so Ivan covered his eyes with his shirt. 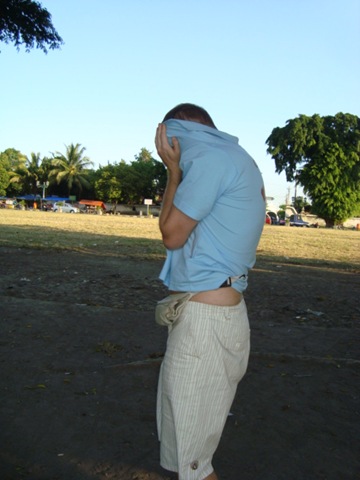 The first time, Ivan was very far from the tree.  On his second go, he reached the tree.  I’m not sure if he gets good luck, since he failed the first time and then succeeded the second time.  I would have tried the blindfold thing if the trees were banana trees.  At least, then I could get a treat afterwards!

We went to Malioboro.  It’s the main street in Yogya (that’s what most people call Yogyakarta).  Jennifer found some nice souvenirs in the shops.

We took a taxi back to the hotel.

We had dinner at the Chandra Restaurant in the hotel. 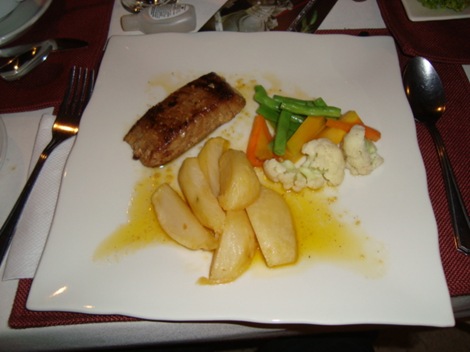 Ivan and Jennifer both had the tasty salmon with potatoes.  I had the Nasi Goreng with bananas.

We took a taxi to Hugo’s Cafe.  There was a lot of people in line.  It was a special event with Glenn Fredly.  We found out later that he’s an Indonesian artist who sings love songs.  The admission price was 100,000 IDR at the door and it came with free cigarettes.  The event was sponsored by a cigarette company.

We walked inside and it was so crowded.  Ivan found a place by the bar.  He ordered two glasses of red wine.  The bar was really smoky.  The house band wasn’t too good.  Ivan thought that we should leave.  We had no idea who Glenn Fredly was.

We took a taxi back to the hotel.  Since, it was late – we went to bed soon after.