We got a taxi to Malioboro.  We were running a couple of minutes late for our 9 am class.  We got there about 9:17 am.

There were many finished batik paintings done.  The teacher said we should choose one.  Then, we could trace it with a pencil on a piece of white cloth.  Otherwise, we could create something original if we wanted.  Ivan and Jen really don’t draw much – so they picked a nice batik painting to trace.  Ivan picked one with three geckos and Jennifer started tracing a painting with two cats.

The teacher set up the fire. 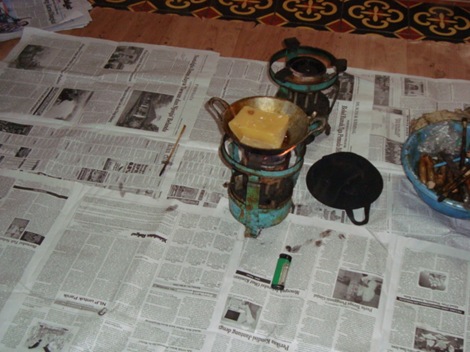 He placed wax in a bowl over the fire.  It would melt the wax down.  He showed Ivan and Jennifer what art object to use.  The object would hold the wax and it comes out of a little tip.  You have to put the wax where the lines of the picture are.  You can use lines or dots.  The wax only lasts a little while.  It won’t show up if you let it cool.  The idea is to have the wax showing on the opposite side of the cloth.  Ivan and Jennifer got a cloth to practice on first. 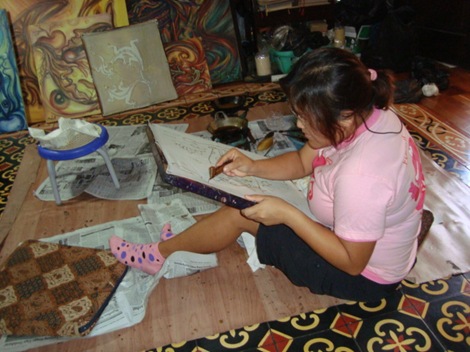 It took a little while to trace the wax on the cloth. 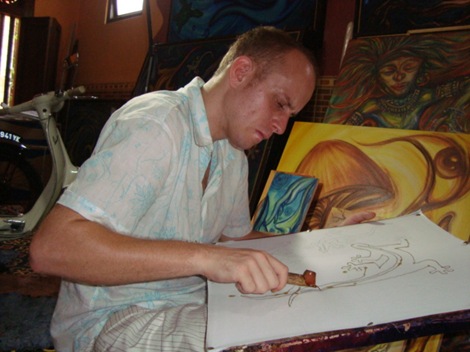 Ivan finished his picture first.  Jennifer was having a problem with the wax.  It was cooling and she would put the wax on the paper – then it wouldn’t show up on the other side.  The teacher said he would help her out.  He told us to go get lunch at Bedhot Resto down the street.

We walked to Bedhot Resto.  Ivan and Jennifer got lunch included with the class.  Ivan got Nasi Goreng while Jennifer got noodles.  I had noodles with bananas.  The lunch was okay.

We walked back to the class.  There’s some awesome artwork on the walls. 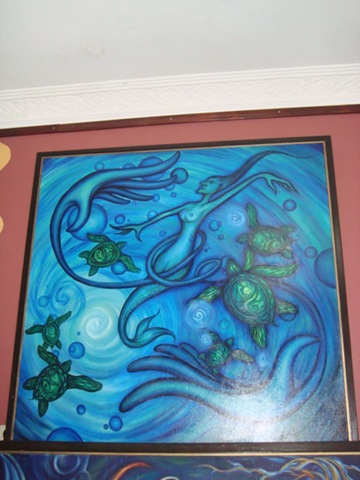 The teacher had finished adding wax to Jennifer’s artwork.  It was time to add color. The teacher asked what colors they would like to use.  If they wanted a certain color they would paint that part with paraffin or with wax.  The teacher applied the color of a dust-like substance.  The substance created coloring in the water and then he put water on the cloth.  The painting would dry in the sun.  Then, the color would appear. 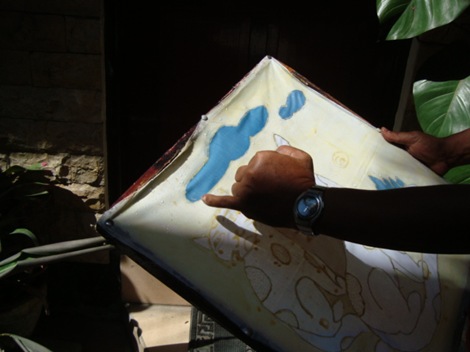 Ivan thought that the teacher should explain why the colors would appear with the different color substances.

There were so many processes since sometimes certain colors would appear after several wax or paraffin applications.  It was very time-consuming. 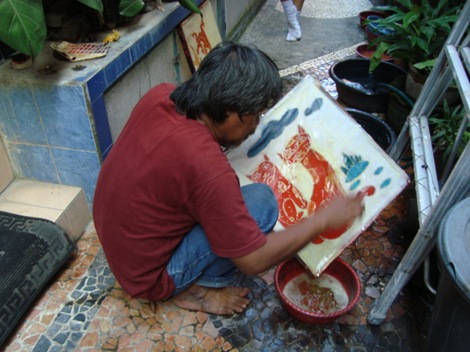 In the end, you can add cracking to your painting.  Both Ivan and Jennifer wanted this for their background.  It gave it a kind of tie-dye look.

The teacher said we should walk to the Bedhot Resto.  He said we could put the paintings in boiling water and it would remove the wax on the paintings.

It only took a couple of minutes to remove the wax.  The teacher said they could hang it up in their hotel room to dry.  The class ended around 3:45 pm. 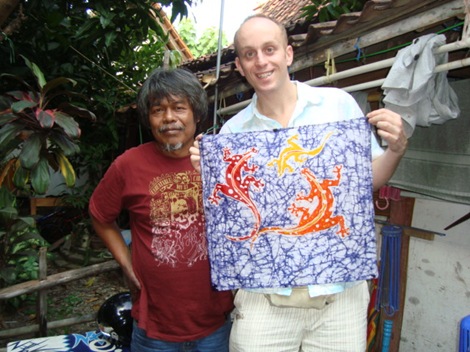 Ivan and Jennifer thought their paintings turned out nice.  The teacher liked Jennifer’s painting better.  Her painting was simple with big cats on it.  The class was nice since they got a nice painting to take home.  It was a plus that the painting is very light and can be folded into a small square. 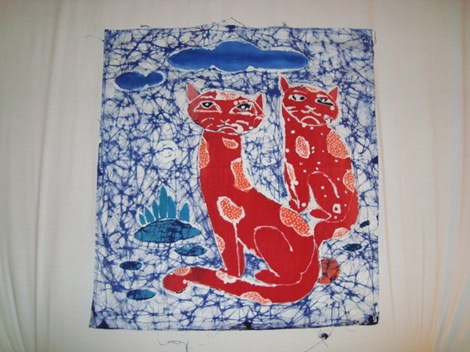 We took a taxi to Gajah Wong for dinner.  There are three different areas you can choose to dine in.  They each have a different type of music in each one.  Ivan wanted the jazz room but the band wasn’t on yet.  We sat down in the room with the music of Javanese Gamelan style.  The music was kind of annoying.  Ivan said we would switch to the jazz classical music room since the band would be on in a few minutes.  The third room has country music in it.

Ivan and Jennifer started off with Salmon Chowder. I ordered fried bananas in a light sauce.  Ivan had vegetarian lasagna. 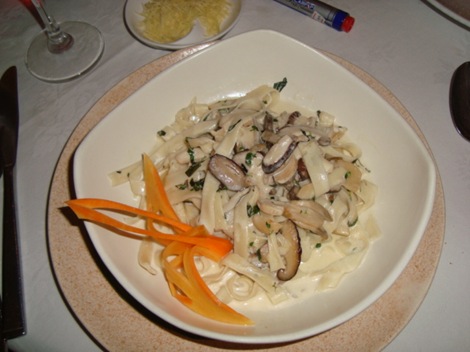 Jennifer got tagliatelli al fungi.  The jazz music was good. 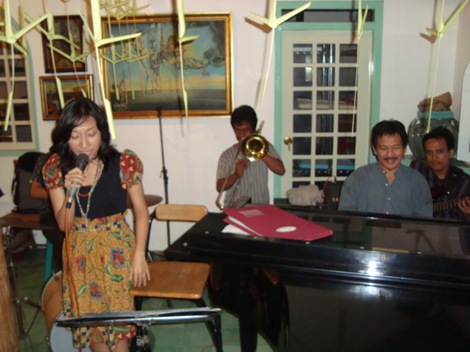 Ivan and Jennifer ended with an apple tart.  The food was alright.

We took a taxi home.  Shortly after, we went to bed.