Ivan, Jennifer and I woke up shortly before 8 am on May 19, 2009.  It was a sunny day.  We went to have breakfast.  It was the same as yesterday.  We really enjoyed the food that was served at Uncle Tan’s.  The river had risen a lot since the rainfall from the previous night.

We set out on the boat ride to the jetty at 10:00 am.  We were told that the mini-van couldn’t come yet.  There was a big truck that got stuck in the road.  The road got muddy from last night’s rain.  We waited for awhile.

One of the guides was trying to figure out what to do.  Ivan suggested that we take the pick-up truck to where the bus was located. The guide said we may have to take the boat to an alternative place.  Then the bus could pick us up there.  But, we ended up packing into the pick-up truck.  There was a lot of luggage loaded into the bed.  The guide said that three people should get out  He didn’t think it could handle all that weight.  There was a big hill that the truck had to go up.  We made the hill easily enough, and so felt sorry for the three people that had to stay behind to wait for other transport.

I rode with Ivan in the back of the pick-up truck. Ivan was standing up holding onto the roof chatting to a Swedish couple that had been at the camp too, and I sat next to him listening in, and contributing a little to the conversation wherever I could.

We met the mini-van maybe 30 minutes later.  There was no more stuck truck.  We drove to the Operations Base.  We arrived at 2 pm.

We were really hungry.  We had lunch there.  There was noodles, eggplant, crab and chicken.

We grabbed our backpacks from storage.  Shortly, we got a taxi to Sandakan.

We walked around to find accommodation. The Lonely Planet/Lonely Monkey recommended Mayfair Hotel was booked up.  Ivan heard of a hostel near the waterfront.  The hostel had rooms.  We checked in to the Borneo Backpackers Hostel.

We took showers.  We relaxed for a short time.

We got a taxi to the English Tea House & Restaurant.

Ivan thought one of the sets sounded good.  It came with 2 scones, clotted cream, jam and a pot of tea.  He ordered two sets.  Ivan got the mango tea while Jennifer got the strawberry tea. 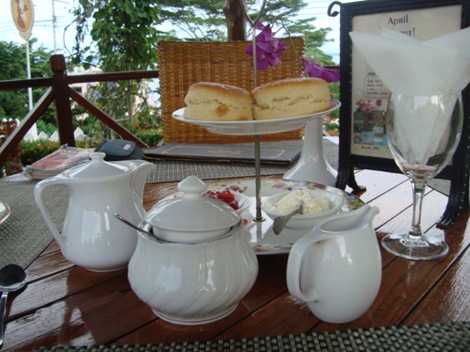 The scones were really good.  I placed a few slices of bananas in one and it was delicious!  Ivan didn’t think his mango tea tasted anything like mango tea.  He got an apple tea instead.  The tea house has a big grassed area.  You can play croquet there. 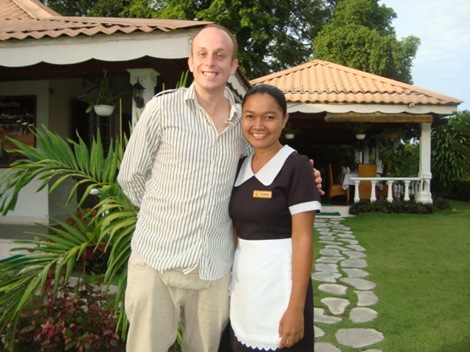 We walked back to the hostel, but walked the wrong way.  The President of Sandakan’s house was right where we walked.  We saw a group of women practicing for a tug of war contest.  We took the steps called ‘100 steps’ to the bottom of the hill. Ivan counted and it’s actually 123 steps.

We walked to the Waterfront Seafood Grill for dinner.  It’s a Chinese restaurant.  Ivan and Jennifer started off with eggplant and chicken. 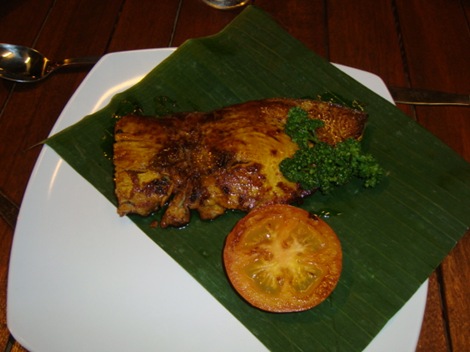 Ivan ordered the bbq tuna with teriyaki sauce.  Jennifer got the mango chicken chop.  I had crispy noodles with bananas.  The food was good.

Ivan and Jennifer watched the movie Sex Drive on the laptop.  I decided to read as it didn’t sound like the kind of movie a young monkey should be watching.  Everybody went to bed an hour or so later.

Ivan and I woke up to go to the Orangutan Rehabilitation Centre on May 20, 2009. It was not really that much fun, as we only saw a couple of Orangutans, and they were quite far away. It was no way near as fun as the visit to the Orangutans in Sarawak when we saw loads of them and were quite close watching them them eat for over an hour.

We relaxed in the room for awhile.  Ivan and I went to the Water Village.  Jennifer thought it was too hot to go anywhere – so she stayed in the hostel.

The water village is a series of houses all built over the water. 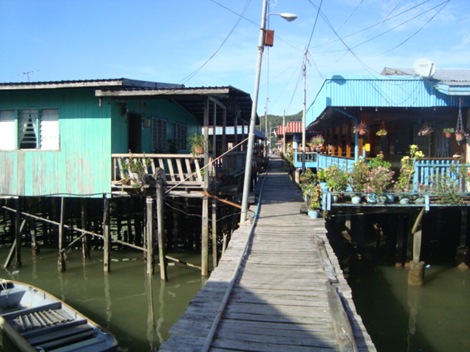 Even though it was obviously very old fashioned, they still had fresh water supply, and electricity. We stopped and chatted to one lady outside her waterhouse, and she showed us how they catch fish- using a cafe which sits under the water. There were no railings on the wooden walkways, so I made sure that i held on tightly to Ivan’s trousers as we walked along, so that I wouldn’t fall in. I can swim, but the color of the water wasn’t really too inviting. I think everyone just throws all their rubbish straight into the water.

Ivan decided that we should head to Kota Kinabalu in the evening rather than stay another night in the hostel.  We packed everything up.  We checked out of the Borneo Backpackers Hostel.

We took a taxi to the bus station.  We booked the 7 PM bus headed to Kota Kinabalu.  The bus fare was 35RM per person. As usual, I hid in Jennifer’s bag so that I didn’t have to buy a ticket. The buses are really nice here.  The seats are comfortable and the air-conditioning is really cold too.  Jennifer uses her sarong to cover up since she gets cold easily.