We were all tired so we went to sleep.

In the morning, we used the internet.  We checked out of the Step-In Lodge, as we wanted to stay somewhere nicer that night.

We walked for a few minutes.  We checked in to the Winner HoteWl, which only cost slightly more than the Step-In-Lodge but was a lot nicer.We placed our backpacks in the room.

Everybody was hungry so we walked to the Le Meridien Hotel.  We went to the Circle Restaurant for the lunch buffet.  There was lots of good food there like salads, cheeses, chicken curry, fish, fruits and desserts. 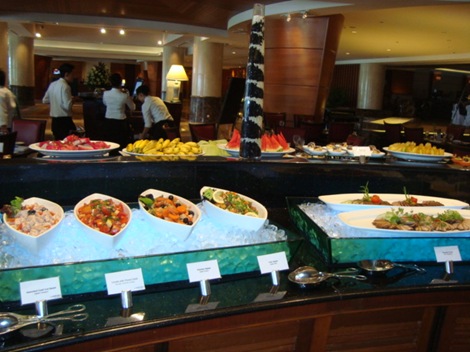 A big plate of bananas was in the dessert section.  I grabbed about a dozen bananas, and then when I was sure that no one was watching (I wouldn’t want people to think I was a greedy monkey..even though I am!), grabbed about a dozen more.  There’s even a station where you can have stir fry or pasta created for you.  Jennifer ordered a pesto pasta and an employee brought it to her at the table.  Ivan and Jennifer didn’t overdo it, but they ate until they were full.

We went shopping in the City Parade Mall for a few hours.  Ivan bought some shirts at the Factory Outlet Store.

We walked to the Filipino BBQ market. 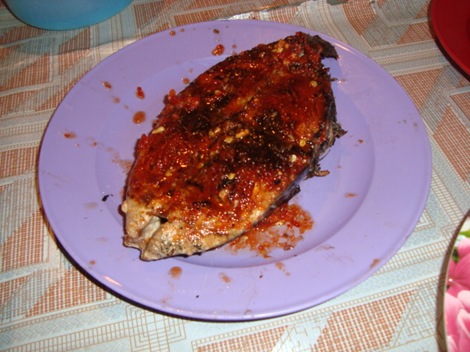 Ivan and Jennifer both ordered a bbq tuna.  I had the chicken and banana bbq.  We went to a different place than last time.  The spicy sauce wasn’t as spicy.  It still tasted good though and was still really really cheap.

Ivan woke up at 6 am on May 22, 2009.  He left the hotel at 6:30 am.  He was headed to Mount Kinabalu – the highest mountain in south east Asia.  He wanted to trek up the mountain.  He would find out at the bottom of the mountain if accommodation was available for that evening, and if it wasn’t then he was going to get the bus back to KK.

I worked on the blog.  Jennifer uploaded some pictures to Flickr.  We chilled a lot in the hotel.  Ivan wrote that he would be staying on the mountain.  He would be back tomorrow afternoon sometime.

We had lunch in the Winner Hotel at the coffee shop.  Jennifer had the chicken and prawn soup.  I had noodles with chicken and bananas.  It was alright.

We walked to the Warisan Plaza Mall.  We went to Yoshimi Japanese Restaurant for dinner.  Jennifer ordered a tuna and cucumber hand roll and a chicken rice box.  Her rice box came with miso soup and fruit.  I had some banana sushi.  The food was tasty.

We went shopping in the mall.

We chilled in the room for the night.  I worked on the blog more.  Then, it was time to get some rest.