Ivan, Jennifer and I checked out of Paganakan Dii on May 17, 2009.  We took a taxi to Uncle Tan’s Wildlife Camp Operations Base in Sandakan.  It was only about 5 minutes away.  We arrived there a little past 1 pm.  It was optional to meet the group at the Orangutan Rehabilitation Centre in the morning, but, we didn’t make it.

Ivan and Jennifer filled out some paperwork.  We ate lunch.  There was noodles, chicken curry, vegetables and crab.  The food was good.

We left a few backpacks with storage at the operations base.  Ivan and Jennifer just packed what we would need.  We had booked a 3 day/2 night stay in the jungle.

The mini-bus picked us up at 2:30 pm.  The group consisted of 12 people and 1 monkey.  We drove for a few hours.  We reached a jetty.  The staff moved all the food and supplies to the boat.  Everybody in their group took their luggage to the boat.

The boat was taking us towards the camp.  The boat rider kept stopping to show us macaques (common monkey in Borneo).

We were assigned a hut. 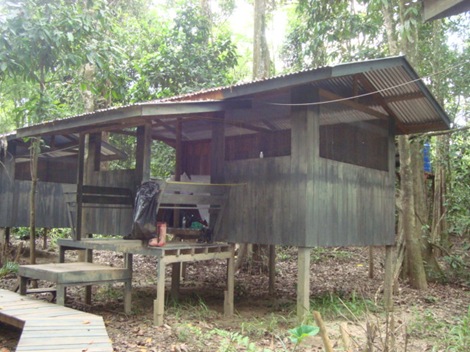 This hut has three mattresses inside.  There is no door and no windows.  There’s no fan or air-conditioning.  The website did describe it as ‘very basic and definitely not the Hilton’, so it was exactly what we had expected. We put our backpacks down.

We went to check out the camp.  It’s very basic.  There’s no running water.  Water is pumped from the river – which is a muddy color. 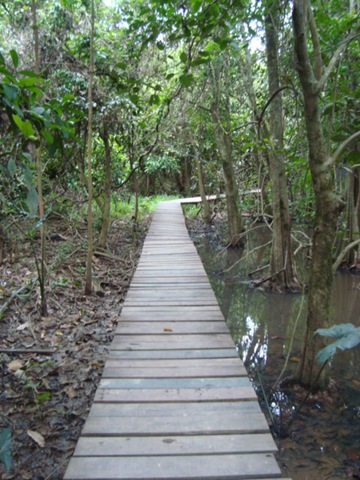 The bathrooms are a 3 minute walk from our hut which is the 2nd farthest hut.  There’s electricity from 6 pm – midnight.

We chilled in our hut for awhile.  We walked to the dining area around 7 pm.  There was more people already staying here.

We had to attend a briefing at 7:30 pm.  We were divided into two groups: Scorpion and Tarantula.  We ended up on the Tarantula team.  One of the guides told us about what activities we would be doing.

It was time for dinner.  You have to queue up right away when they say it’s dinnertime.  The food goes quickly.  There was noodles, chicken and vegetables.  I had to add bananas to my dishes to make them suitable for my taste requirements.  It tasted pretty good.

It was time for the Night Safari.  We hopped into a boat around 9:30 pm.  A guide at the front had a big spot light.  He quickly scanned the trees to see if there’s any wildlife.

We saw proboscis monkeys, macaques, hornbills and a baby crocodile.  We really didn’t see that much.  The boat ride lasted an hour long.

We walked back to our hut.  We chilled for awhile.  Lights go out at midnight.  We slept around midnight.  We had a really early start tomorrow for a morning safari boat ride.  It started raining.  It was good since we didn’t have any fans so the rain ensured that it was pretty cool during the night. I slept next to Jennifer on the mattress – I didn’t have a pillow so I had to use a banana. Actually to tell the truth, even if there had have been a pillow, I would still have used the banana because its something I do quite regularly anyway.

We were woken up by the guides saying Morning Safari on May 18, 2009.  Last night, they said the guides would shout it.  But, they said it in a normal voice.  Ivan and Jennifer got ready.  Jennifer walked to the bathroom.

We boarded the boat at 6:30 am.  We took off searching for wildlife.  We saw eagles, macaques, proboscis monkeys, storks and hornbills. 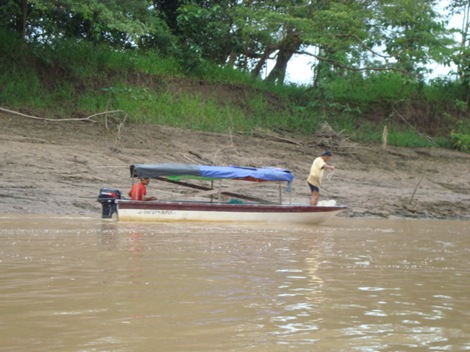 We saw people fishing on their boat.  The driver kept trying to find more animals.  We didn’t arrive back until 9:05 am.  It was only meant to last 1 hour, so after 2.5 hours on the boat we were all quite hungry! We arrived back and got some breakfast.  It was pancakes, french toast and noodles.  The food was tasty again.

Jennifer and I both took a short nap.

It was time for the jungle trek.  Ivan and Jennifer both put on their rubber boots.  We took a boat to the jungle.  Our guide was named Jeff.  He was a friendly guy who told us lots of stories.

It was really muddy in the jungle.  We didn’t see much again.  We did see millipedes and centipedes. 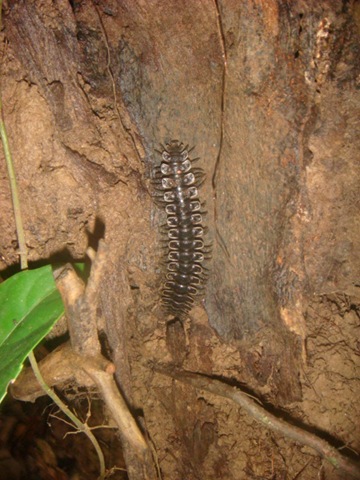 The millipedes let out a liquid that smells like almonds.  Jeff said that once he had a few Japanese tourists in his group.  They ate some of the millipedes.  Jeff also told us how he has been bitten by centipedes and scorpions.  He said that centipedes can make you cry since it hurts really bad.  Jeff pointed out a poisonous yam plant.  Our trek lasted a little over an hour.

We had lunch at 12:30 pm.  The food was chicken curry, noodles and vegetables.

We chilled in the dining area.  Some of the group and guides were playing football.  Ivan joined for a couple minutes but it was too hot to play for long.

Biscuits, tea and coffee were served at 3 pm.  It was an hour and a half ahead of schedule.

It started raining.  A boat ride was coming up.  We decided to pass on the boat ride.  Jennifer was reading Killing Rain by Barry Eisler.  Ivan decided to go on the boat ride at 5:00 pm.  It was really cold since it was raining. He said it was only okay – a lot of the wildlife was obviously under their rainshelters so didn’t come out to say hello to the boat.

It continued to rain – even harder now.  We had dinner at 8 pm. 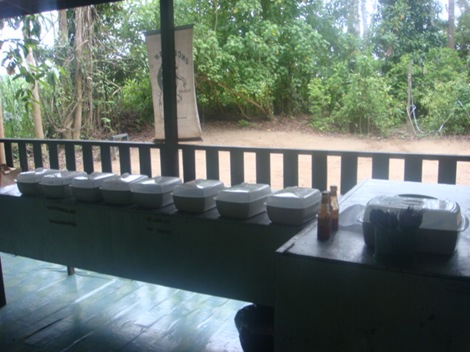 There would be a night jungle trek at 9:30 pm.  We thought it was way too rainy to head out on the trek, so we stayed behind in the hut..  We heard that the group saw some frogs, but not too much else, so it sounded like we didn’t miss much.