Ivan, Jennifer and I had lunch at the Singgahsana Lodge on May 7, 2009.  Ivan and Jennifer both had tuna sandwiches.  I had a cup of noodles with bananas.  Ivan stomach’s still wasn’t feeling good.

We stayed at the lodge for most of the day.  I worked on the blog.  Ivan and Jennifer used the Internet.  They watched a few episodes of Arrested Development on the laptop.

For dinner, we went to the Khatulistiwa Restaurant and Cafe again.  I had a Spicy Thai Soup with bananas.  Ivan and Jennifer started off with a roti canai.  Ivan got the fish porridge but said that it wasnt as good as the previous night – he didnt think the rice had been cooked enough to make it porridgy enough.  Jennifer had a nice chicken hot pot.

We had lunch at the Deli Cafe on May 8, 2009.  I had a good banana and honey sandwich and a Big Banana smoothie.  Jennifer got a hawaiian chicken salad and a Fruity Tuity smoothie.  Ivan got cereal with berries and Vietnamese spring rolls.  Ivan stomach was still feeling weird today.

Ivan booked a tour for us to go see the orangutans at Semenggok Orangutan Rehabilitation Centre.  There’s no guarantee that you will see the wild orangutans at feeding time, but there’s a chance.  There’s two feeding times, one at 10 am and another one at 3 pm.  The mini-bus picked us up at 2 pm.  We were the only ones on the mini-bus.  We arrived there shortly before 3 pm.  There was probably about 40 people there.  Some had waited since the morning time.  They didn’t get to see any orangutans in the morning feeding time.

It was 3 pm.  An employee told us that we should be quiet.  Also, we shouldn’t hold bottles, food or drinks because the orangutans may attack you.  He said that since there was a lot of bad weather lately – the orangutans haven’t come for food the last three days.  We walked about 100 meters to the main feeding area.  We waited there for a few minutes.  One of the employees was listening to his walkie-talkie.  He told us that we should go back to the entrance.  There were two orangutans in that area.  So, we walked back.  There were two orangutans.  Another one showed up shortly.

They climb around on ropes that are tied to the trees.  The employees put out papayas, bananas and coconuts for the orangutans on platforms.  Sometimes they would throw a fruit up to an orangutan.  It seems like these orangutans have it made.  They can look for food in the wild.  But, food is always available for them twice a day if they come here.  It was cool watching them eat.  The three orangutans liked different things. 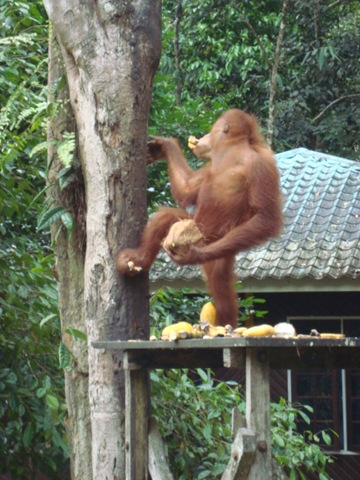 One liked to put a bunch of bananas in his mouth.  One liked the papayas.  The other one liked the coconuts.  One smaller orangutans liked to carry a coconut with his feet. 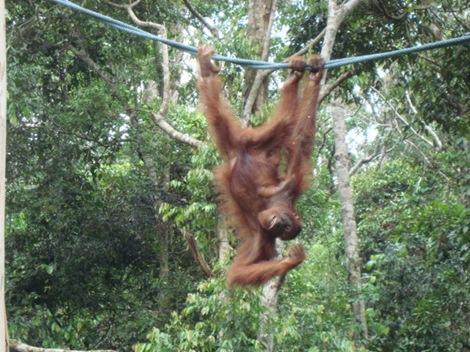 I saw one of the orangutans hanging upside down.  We were warned that one of the mama orangutans was dangerous.  She had attacked a few people before in the past. 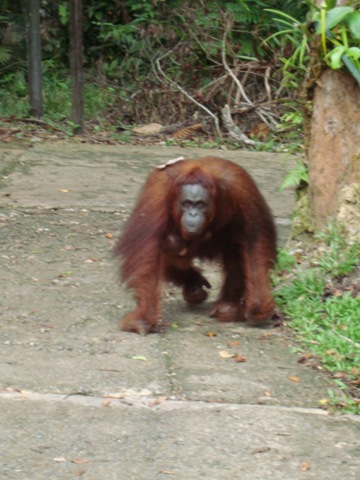 She was coming our way with her 3 month old baby and another orangutan.  The baby was so tiny.  The mother was very protective of the baby.  We loved watching the orangutans.  I wanted to go play with them.  But, Ivan and Jennifer didn’t think that was wise.  They didn’t want me to get hurt.

We went back to the mini-bus shortly after 4 pm.  As we were driving back, it started raining.  We were lucky that it didn’t rain when we saw the orangutans.

We relaxed in the lodge for awhile.  We decided it was time for dinner.

We walked to Pizza Hut.  Ivan felt like having pizza tonight. 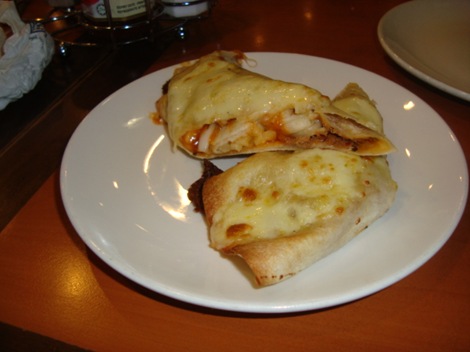 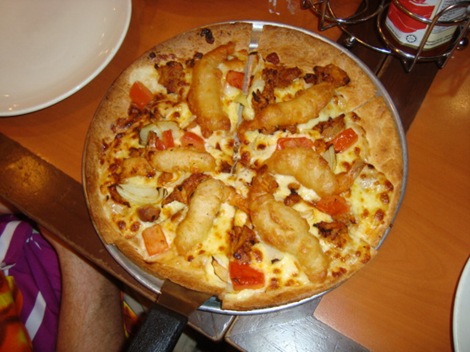 It was a white pizza (where the pizza doesn’t have tomato sauce).  The toppings were lime dressing (which tasted like mayonnaise), chicken, mushrooms, prawns and mozzarella cheese.  There were no mushrooms on the pizza.  Ivan doesn’t like white pizza so he was a little peeved.  Jennifer thought it was alright.

We took a taxi to Victoria Arms bar.  It was Ladies Night until 9 pm.  They wouldn’t allow any men in until after 9 pm when the cover charge would go up.  Jennifer didn’t want to go to the bar since she her stomach hurt.  I decided to go back with Jennifer.  Ivan walked us part of the way.  Ivan walked back to the Victoria Arms.  The bar was filled with hundreds of ladies.  It was really hard to get any service.  It was really noisy and crowded.  Ivan had a drink and then walked back to the lodge.