Ivan, Jennifer and I had lunch at the Deli Cafe on May 5, 2009.  I had a nice banana and honey sandwich.  Ivan and Jennifer both had a tuna sandwich.  Ivan had a delicious Fruity Tuity smoothie which contains dried fruits.  I had a Big Banana smoothie.  Jen had a Mango Delight Smoothie.  The food is really good here.

We walked around the city.  We stopped at the Sarawak Craft Council.  The shop has many handmade products there like tree bark wallets, beaded coin purses and hats.

We started to walk around more.  It started showering.  So, we headed back to the hostel.  It was raining for awhile.

Ivan and Jennifer used the internet.  I worked on the blog.

We walked to Khatulistiwa Restaurant and Cafe.  Here, we had dinner.  I had the Thai Spicy Soup with bananas. 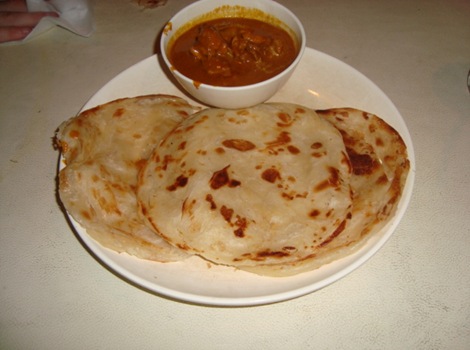 For a starter, Ivan and Jen got the roti canai.  They thought it tasted great.  Ivan had the tasty fish porridge.  Jennifer ordered the black pepper udon noodles.

Ivan got some take-out food from the Deli Cafe on May 6, 2009.  He ordered the same items as yesterday.  We were taking a tour to the Sarawak Cultural Village.  The bus picked us up at 12:30 pm. 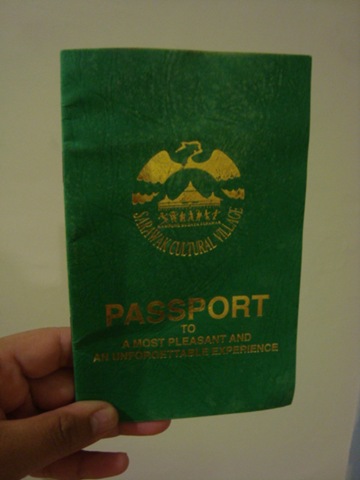 At the entrance, we were given passports.  Each house you visit, you get your passport stamped.  Jennifer thought it was a cute idea.  The activities weren’t starting until 2 pm, so we went shopping in the souvenir shop.  They have a lot of great souvenirs.  Jennifer said she wanted to come back to the shop to buy things at the end.  We decided to sit down at the restaurant, as there was still 40 minutes left until 2 pm.  Ivan and Jennifer was reading the passport.  It talked about the different ethnic tribes living in Sarawak.  Sarawak is the region of Borneo where Kuching is located.  Sabah is the other region in Borneo.  The passport also talked about the dances that the ethnic people do. 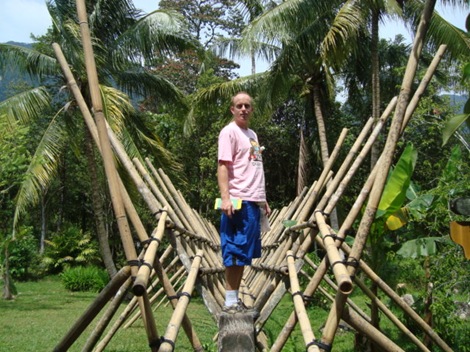 We walked across the wooden bridge to get to the first longhouse.  The Bidayuh longhouse is actually a round house.  There’s lots of things in the house. 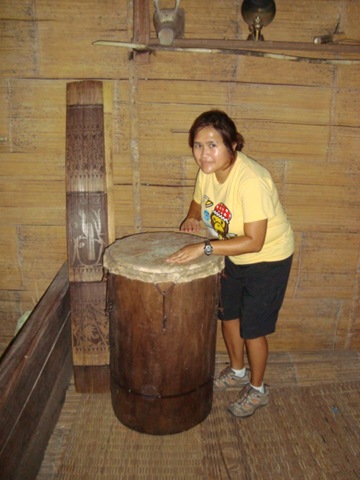 There were drums, guns, baskets, vases and cannons.  In the back, there was a lady with a blowpipe.  We got to shoot the blowpipe for free.  The target is a Styrofoam with a cat drawn on it.  First, you put the dart in. 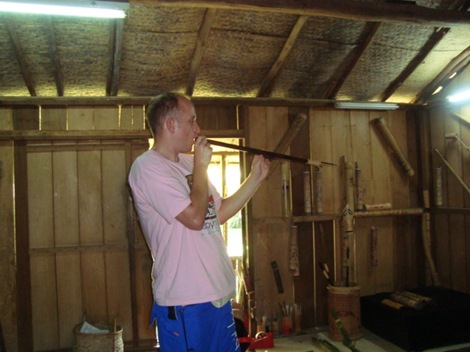 The trick is to take a deep breath and then blow.  The dart will fly towards the target.  I did blow one dart.  It wasn’t too hard.

There’s artwork created by different artists outside all along the cultural village.

We walked to the next house which was the Iban longhouse. 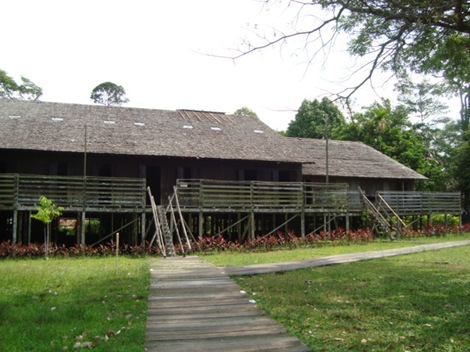 This house had many things in the house like dishes, shields, swords, musical instruments and artwork.

A swing was in the house.  I sat down and swung for a few minutes.  It was fun. 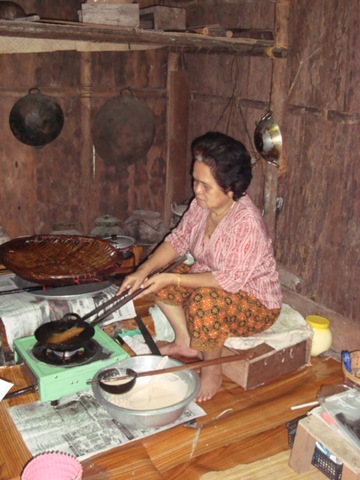 There were two Iban women cooking some cookies that were for sale.  We also saw a lady making art by sewing. 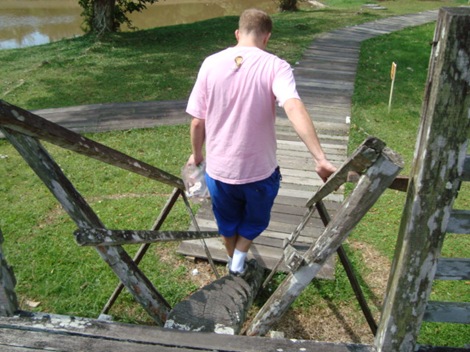 We walked down these unique stairs to get back on ground.

The Penan hut was our next stop.

The passport describes them as shy nomadic people who move around a lot.  Their hut was pretty basic since they only stay in the same place for a few weeks or months.  The Penan man was actually very talkative.  He talked to Ivan about England.

Here, we got to shoot the blowpipe.  It was 3 darts for 1RM.  The blowpipe was a very long and heavy.  Jennifer had to place it on a branch to shoot it.  Jennifer liked sending the darts flying. 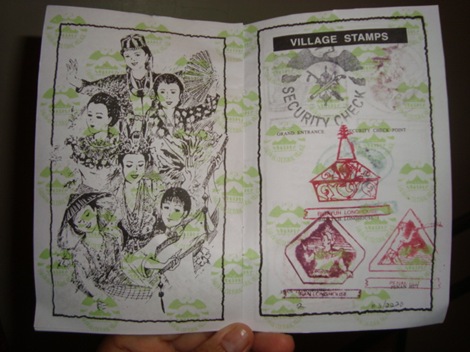 We were filling out our passports with stamps from each longhouse.  We found out a lot of the activities weren’t available since they were building a new house.

We walked to the Orang Ulu longhouse.  The longhouse is far from the ground.  We had to walk two flights of stairs to reach it.  There was a xylophone. 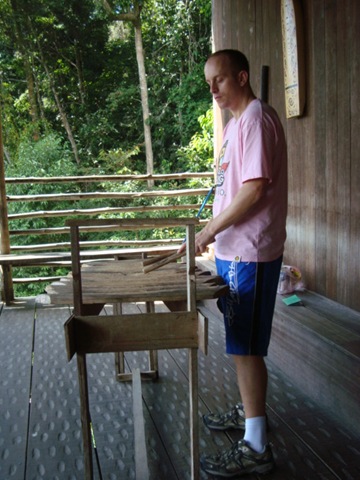 Ivan started playing a few songs.  The main Orang Ulu man wasn’t there, so we couldn’t try on any costumes or get a traditional tattoo done.

There were similar items here like dishes, baskets, guitars, tools, pots and shields.  An Orang Ulu man was making a guitar.  We left to head to the sword making foundry.

We got to the foundry but unfortunately nobody was there. 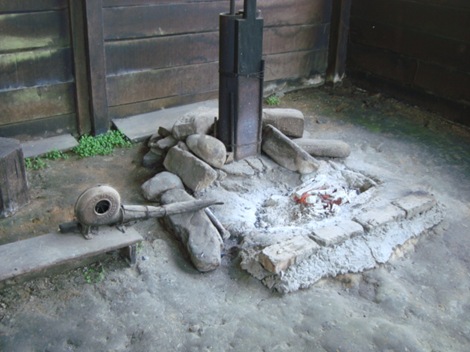 The fire was still warm though.  Ivan wanted to make a sword.

We walked to the Malanau tall house.  This house had artwork, vases, paddles, gongs and a Healing Hall. 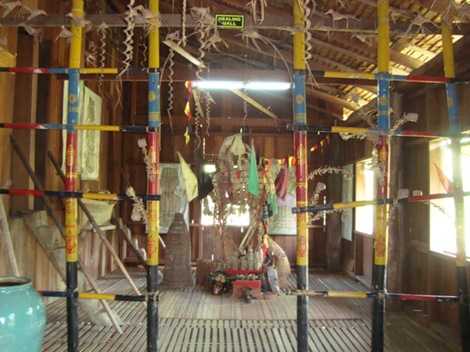 Outside, they had a big swing.  Ivan wanted to ride it. 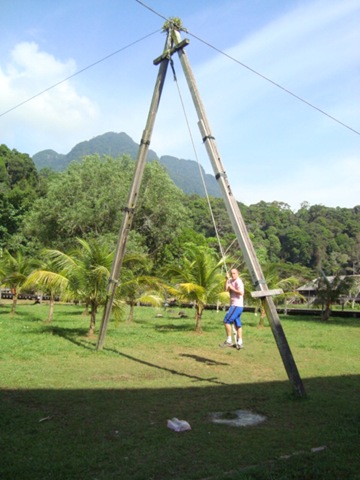 He thought it was fun.  It seemed hard for Jennifer since it was hard to hang on.  I swung wildy on it, as swinging is something that comes naturally to me, due to my monkeyness.  Jennifer was worried I was going to hit the wood – but I didn’t.  It was real fun!

We walked to the Malay House. 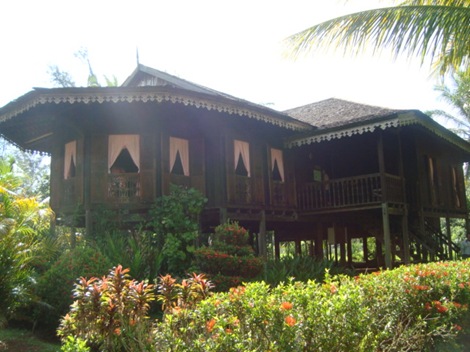 There was a really nice bed inside.  They had games, a sitting area, paddles and hats in the house. 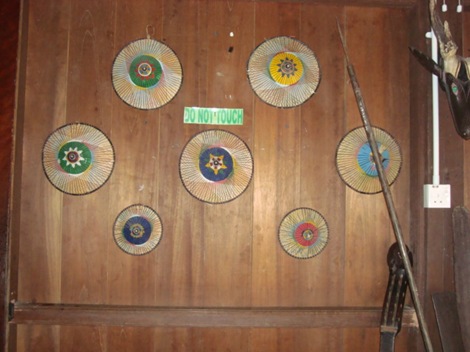 They were selling sweets in the back room.

Our last house was the Chinese Farm House. 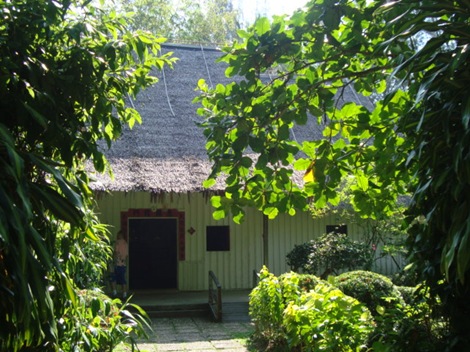 It was probably the simplest house.  There were clothes, hats, a pepper thresher, pepper blower and a bed.

It was nice exploring the different houses of the ethnic people.  There’s a nice lake in the middle of the cultural village. 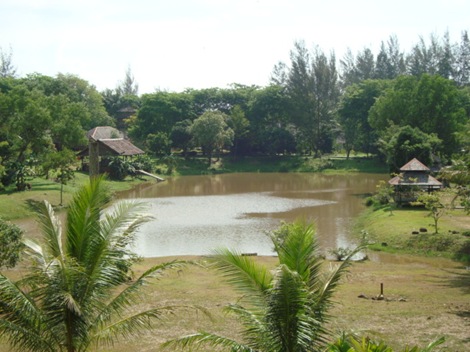 We walked to the cultural show.  It started at 4 pm.  They did different dances.  One they carried a lady on a few wooden sticks. 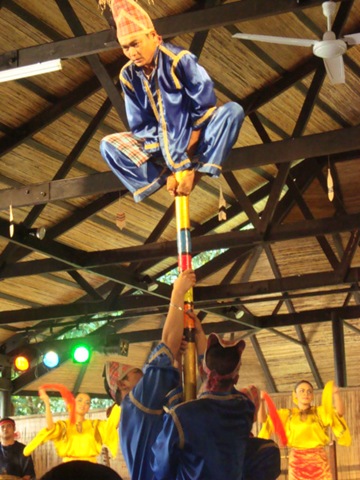 Another dance had a man stand on a stick and then twirl on it.  One man did a dance with a sword and shield.  He also shot balloons with a blowpipe.

After the show, we headed to the souvenir shop.  Ivan and Jennifer bought some souvenirs.  We waited for the bus.  We were taken back to the lodge.

We chilled at the hostel for a little while.  We got ready for dinner.  We walked to the bla bla bla restaurant.  The restaurant is real pretty inside. 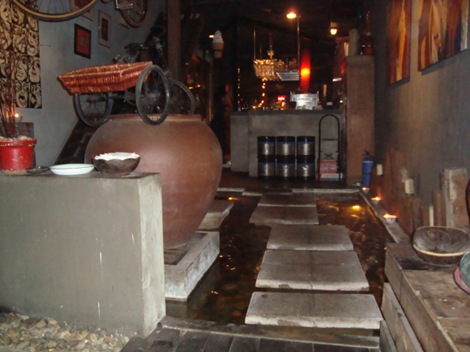 You walk over a water area filled with big goldfish.  I ordered the chicken, bananas and salsa dish.  Ivan and Jennifer started off with the delicious anchovy aubergine.  Ivan ordered the salmon with mashed potatoes. 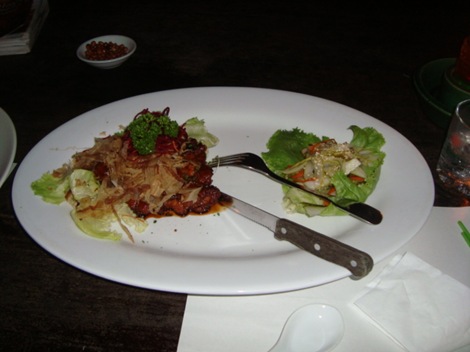 After the meal, we went to Mojo.  It was Ladies Night, so Jennifer got a free drink which was Vodka Lime.  It didn’t have much vodka in it.  We walked to the back. 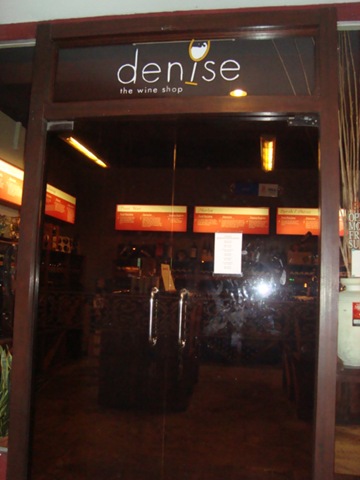 The wine shop was called Denise the Wine Shop.  There were signs that talked about what food went well with the different types of wine.  I told Jennifer she should write down the info in her notepad so that we know which wine to order with our meals in the future, and she said it was a good idea and wrote all the info down.

We headed back to the lodge.  Ivan started feeling really bad.  He reckons that it was a bad piece of salmon.  His stomach hurt and he felt horrible.  We went to sleep shortly after.