Ivan, Jennifer and I went to lunch at the Jonker 88 House of Museum cafe.  Ivan and Jennifer both had a bowl of Nyonya Asam Laksa.  It’s a local specialty in Melaka. 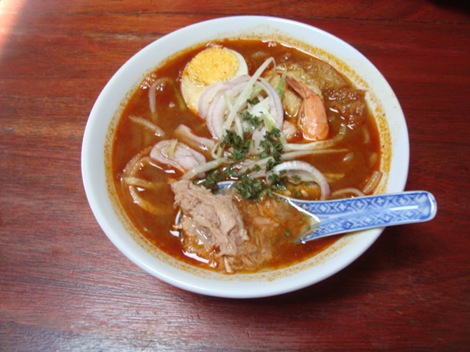 It’s a spicy soup with big white noodles, egg, fish, tuna, tamarind, onion, cucumber and shrimp.  I had a good soup with bananas and chicken.  We really liked the soups.  There was an interesting dessert we wanted to try.  Ivan each got us a baba chendal.

It’s ice with caramel sauce and beans.  I added banana to my dessert.  It tasted really sweet.  We all enjoyed it.

We walked to The Eight Immortals House.  It’s the tea shop of Mr. Yee.  Mr. Yee is a couchsurfer.  We would be staying at his house tonight.  Mr. Yee served us some tea.  I didn’t have it since I prefer banana drinks.  He told Ivan and Jennifer about a tea ceremony class he teaches.  Ivan asked if they could take it.  He said yes.  The Chinese tea ceremony class is available to take 11 am or 3 pm.  Mr. Yee talked about tea.  He is so passionate about it.  They learned about what temperature each type of tea should be brewed at.  He also talked about the 6th, 7th and 8th senses.  Mr. Yee then showed how to place all the items used in the tea ceremony. 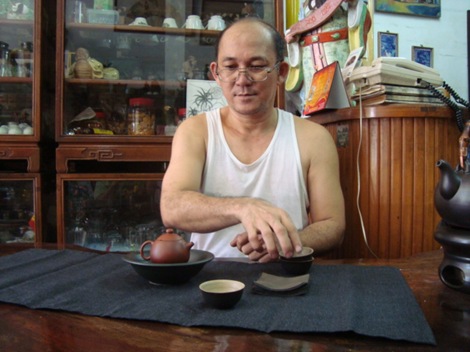 Each item must be placed in a certain order and in the correct position.  Putting back the items must be done in the reverse order.  It was Ivan’s turn to try it.  Mr. Yee helped out if he forgot what the next item was.  Then, it was Jennifer’s turn.  I think she did a little better than Ivan. 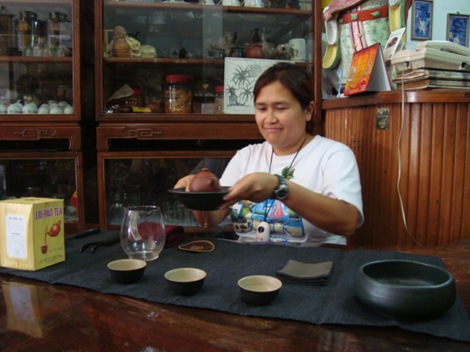 She had the advantage since she got to see it twice before actually doing it.  Mr. Yee showed them how to serve the tea next.  When he serves it, he says inside his head Good Thanks, Respect and he smiles to the person he’s serving.  There’s an order to where you place each cup and who you serve it to. 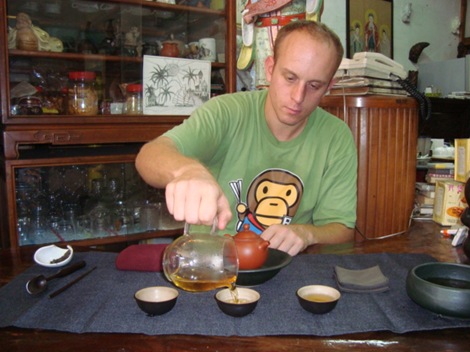 Ivan was next to serve the tea.  He did pretty good.  Then, Jen was serving the tea.  Mr. Yee showed a tea tasting.  It featured 5 different teas. 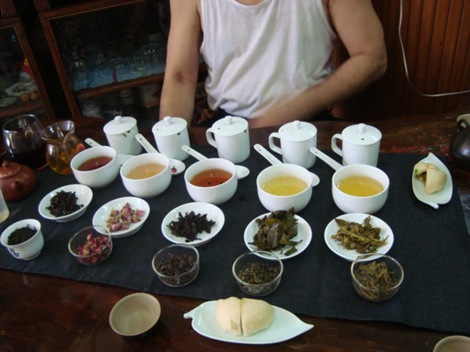 Only one was brewed at the right temperature.  Ivan and Jennifer picked the right one.  They thought it tasted the best.  They were served a sweet cake to eat with the tea.  The Chinese tea ceremony class was enjoyable.  Mr. Yee said that people use it these days to converse while having tea.  This is a great class.  If you’re ever in Melaka, go to the The Eight Immortals House tea shop at 22, Jalan Laksamana.  The tea shop is filled with teapots, tea cups and tea. 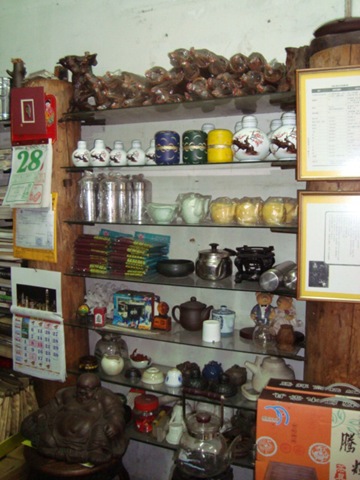 We left our backpacks at the shop.  We were going to have dinner with Mr. Yee and his wife Susan later tonight. 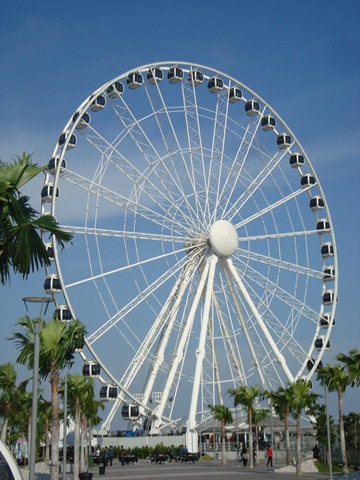 We took a taxi to the Eye on Malaysia.  It’s like the London Eye. The view shows the city.  It’s not much of a view. 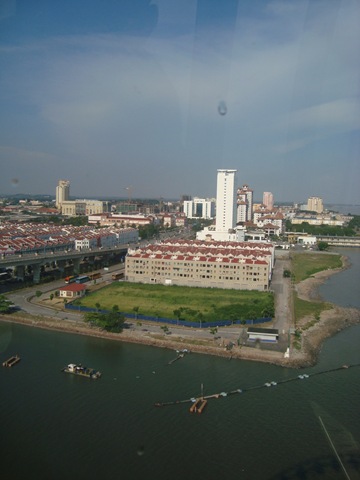 The Eye on Malaysia used to be in Kuala Lumpur.  I think the view in KL would have been a lot better since there’s more to see.  Ivan thinks Melaka is a town better by foot than a view up above.  The ride is about 15 minutes.

We got a taxi back into the city.  Jennifer wanted to check out the churches.  First, we went to the Church of St. Francis Xavier. 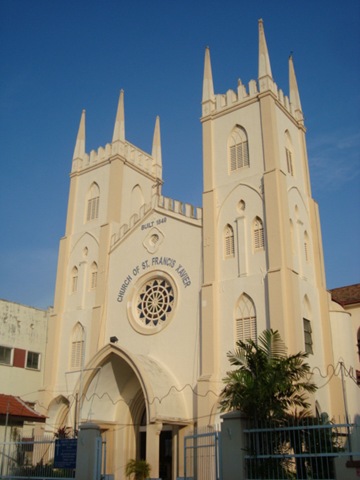 It’s a Catholic Church.  Francis Xavier is known for spreading Catholicism around Asia.  There was a mass going on at the time we were there.

We walked further along.  Here, we saw the Christ Church. 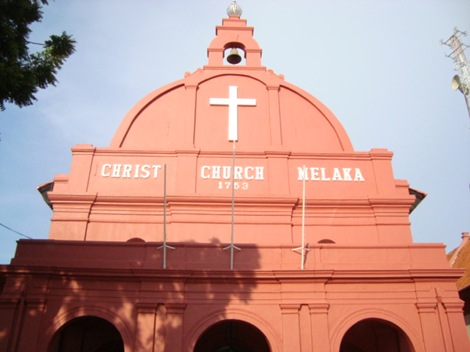 It’s a Protestant Church located in the town square.  We couldn’t go inside since it was already closed.

We headed back to the tea shop.  Mr. Yee and Susan were closing down the shop.  They had cooked us dinner.  There was Bee Hoon noodles, fried chicken nuggets, potato, cucumbers and tofu.  There were a few sauces for dipping as well. 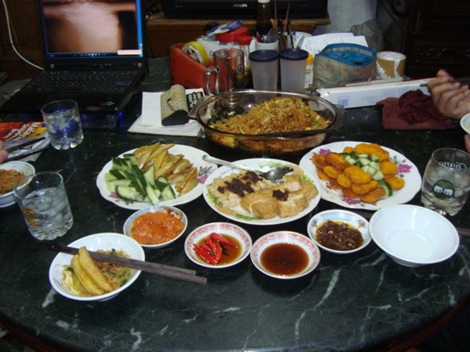 I had tons of Bee Hoon with Bananas and chicken nuggets.  The food was really good!

Mr. Yee and his wife stay at the tea shop.  He has a house elsewhere that he lets couchsurfers stay at.

We went to meeting with Mr. Yee and Susan.  They do a lot of charity work for Foundation.  He even volunteers to do a Chinese tea ceremony class for them.  We went to the local coffee shop near the meeting.  We used the internet and read.

Mr. Yee took his wife back to the tea shop.  We loaded our backpacks into his car.  He drove us to the house we’d be staying at for the night.  It’s about a 5 minute drive away from the town square.  The house was nice.  There was no air conditioning.  So, we used the two fans that were in the house.  We got ready for bed.  Shortly after, we went to sleep.