We arrived at the ferry station.  Ivan traded our paper to get a ferry ticket.  The boat was supposed to leave at 11 am.  The boat wasn’t even at the station yet.  We left at 12 pm.  The ferry ride was crowded.  We sat on the floor of the boat outside.  The ride only took about 20 minutes.  We grabbed our luggage.  We did have to wait 10 minutes for a mini-van to come.  The ferry company drove us to our guesthouse.

We checked in to Penzy Guesthouse.  It’s run by a Thai lady named Penzy and her American husband.  They were really nice to us.  They told us about a few restaurants nearby.

We went to a Thai restaurant nearby.  I can’t recall the name though. 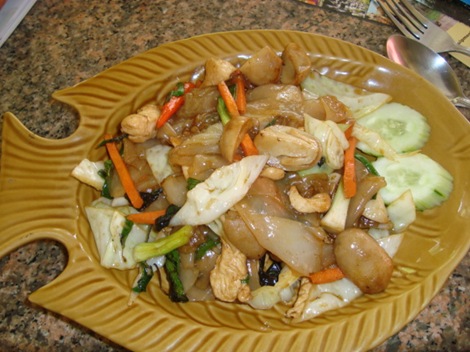 Ivan had pad-seaw with chicken while Jennifer had chicken on rice.  I had banana curry with rice.  The food was alright here.  Ivan rented a motorbike.

We all slept a few hours.  We were really tired.

Ivan drove us to an internet cafe.  The wi-fi wasn’t working at the guesthouse.  We all used the internet for about an hour.

We went to The Wave Samui for dinner.  Ivan had the red curry while Jennifer got the green curry.  I had a pad thai with bananas and chicken.  The food was pretty good.

Ivan heard about the Bar Ice.  The bar has a room filled with things made out of ice.  Ivan drove us to Bar Ice.  There’s an entrance fee to get into the ice room.  Ivan and Jennifer had to put on a black jacket, hat and gloves that you provide.  They didn’t have monkey sized jackets, hats or gloves.  But, I didn’t need it since my fur keeps me warm.  It was pretty cold in there though. 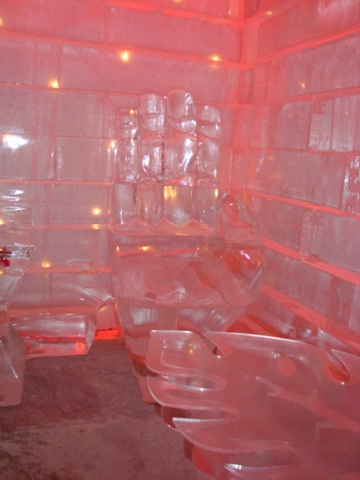 I saw a chair shaped like a hand.  There were statues of Thai people. 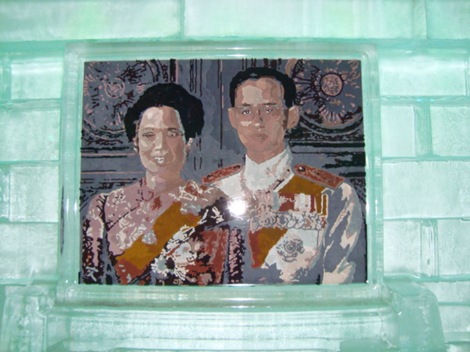 A picture of the King and Queen is there.  The whole bar is made out of ice. 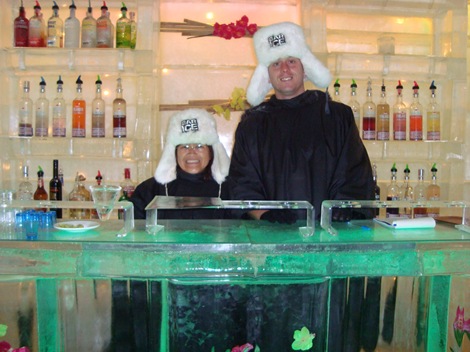 The drinks are served in a glass made of ice.  The drinks are already pre-made served in a jug.  They should have bartenders in there making fresh cocktails.  There was a ice sculpture that looked like an elephant.  The coolest one was a tuk-tuk made out of ice.  I enjoyed sitting in the front and pretending I was driving it. 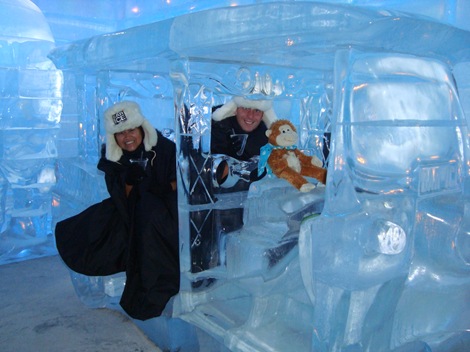 The walls are even ice!  Lights changed colors in the walls and the bar.  They kept playing ‘Born Slippy’ by Underworld over and over.  Ivan complained about it to the lady serving the drinks.  They changed it to another song.  I wish they had a monkey or a banana ice statue.  Bar Ice was a really cool experience. 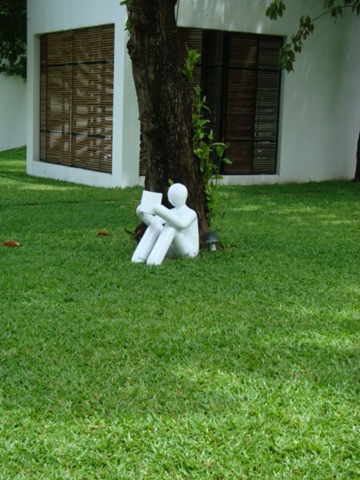 I liked the statues they have of people reading around the resort. The pool is cool since the tiles are red and it makes the water look red. 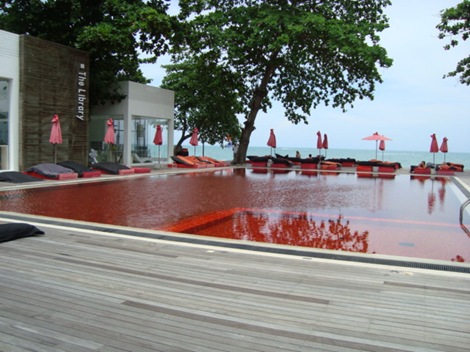 We checked out their restaurant.  The food is way too pricey.

We had lunch at Tropical Murphy’s.  Ivan and Jennifer shared a tasty shrimp stuffed potato skin for a starter. 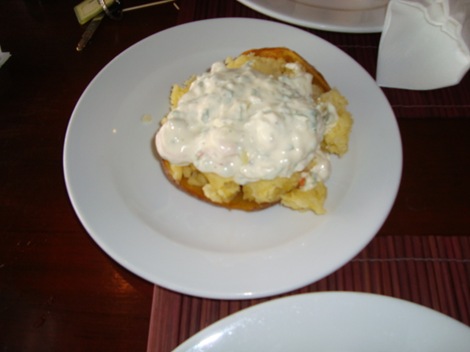 Ivan drove us around the island.  We stopped at Tesco Lotus.  We wanted to buy some water guns for the upcoming Song Kran Celebration.  They have a celebration of a big water fight starting tomorrow at 4 pm and the whole day on April 13th.  Ivan and Jennifer bought a few water guns and other things.  Ivan lost the keys to the motorbike in the store.  It took awhile for him to find it.  Thank goodness he did.

We stopped to look at souvenirs.  We walked down to Grandfather and Grandmother Rock.  There’s a rock shaped like a penis and one like a vagina. 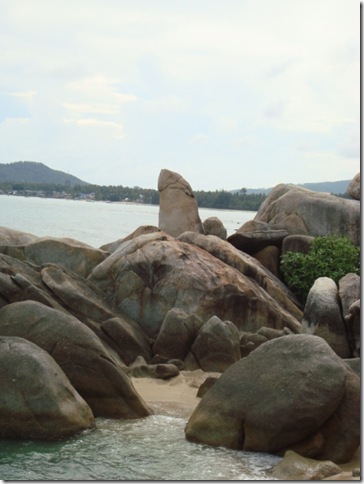 People were climbing up near the penis rock.  It was a bit of a walk though.  We couldn’t find the Grandmother Rock.

We chilled at Penzy Guesthouse for a short while.  Ivan drove us to an internet cafe.  We used the internet for an hour.

We went to The Three Monkeys for dinner. 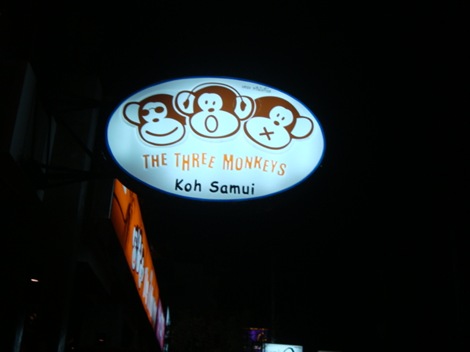 It’s a bar and restaurant run by three monkeys. Apparently, there were three monkeys traveling around Thailand and they landed in Ko Samui.  They decided to open a bar and restaurant in Ko Samui.  One monkey cooks, another cleans, and the third washes the dishes.  I had chat with one of the monkeys, and enquired as to if they might ever consider employing another monkey (me) and calling it the four monkeys. They said I was too young, and besides they wanted to keep the name the three monkeys because otherwise it would mean changing the sign outside and all the posters and menus!

There’s a special monkey menu that has a strong banana theme running through it. 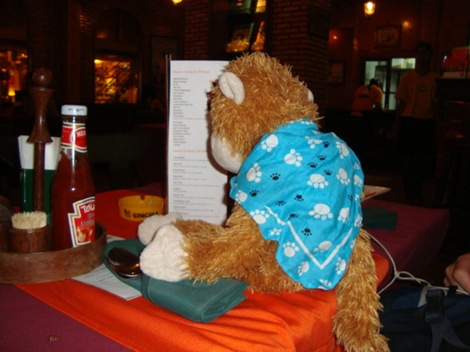 You have to ask for the monkey menu and BE a monkey of course.  The regular menu has many Monkey-named dishes.  Ivan and Jennifer shared the Corny Monkey to start off with.  It’s lettuce wraps with corn and chicken.  Ivan had a Thai fish dish while Jennier had the chicken satay.  I ordered a Monkey Marinara – spaghetti marinara with bananas.  The food was okay here – nothing special.

We walked across the street to the Monkey Bar.  They were playing good music.  They have a couple funny monkey statues. 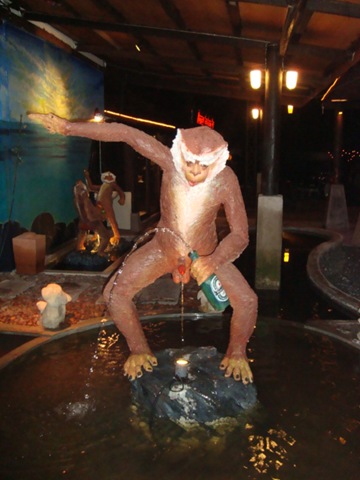 That’s the only thing monkey about this bar.  We sat down at a table.  Ivan and Jennifer had a drink.  I had a banana and mango juice.  The bar was getting ready for a fire show.  The fire show was cool. 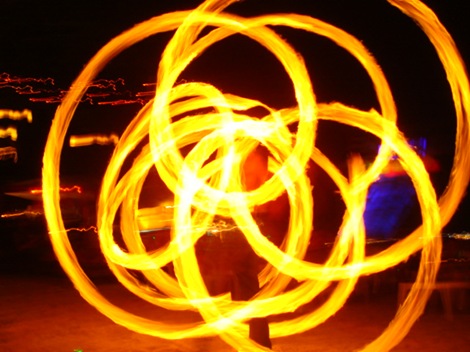 We saw a lady doing the fire balls.  She was a beginner though.  The rest were Thai guys.  We watched the fire show and then left.

Then, we stopped by the Rock Cafe.  Jennifer saw a art picture of Morrissey on the wall. 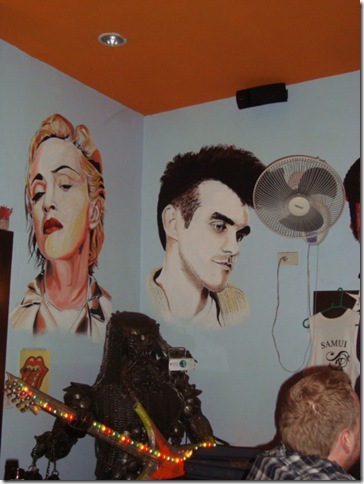 She also saw an autographed picture of Morrissey in a table there.  We drove to the guesthouse after to get some rest.