I worked on the blog with Jennifer.  I had gotten so behind on the blog.  Sometimes, I forget to do it or I’m just not in the mood.

We checked out Mushy Mountain.  Ivan said we’d come back before the Full Moon Party.  Full Moon Party is a party held every month on the night of the full moon in Ko Phangan, Thailand.  In high season, there can be up to 30,000 people partying on the beach.

We ended up going to Monna Lisa for dinner. 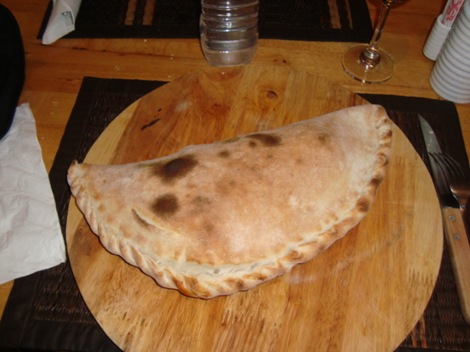 Ivan had a really tasty vegetarian calzone.  Jennifer ordered a penne with tomato sauce, creme and pesto.  I had a baked ziti with bananas.  This restaurant has some good food.

The weather was overcast.  We hoped that it wouldn’t rain for the Full Moon Party.  Ivan bought some cheap rain jackets just in case. Then, we could dance even if it rained.  Jennifer made me a custom made rain jacket for me made out of plastic bags.  It fit pretty well!

Ivan bought some glow-in-the-dark glasses for the party. 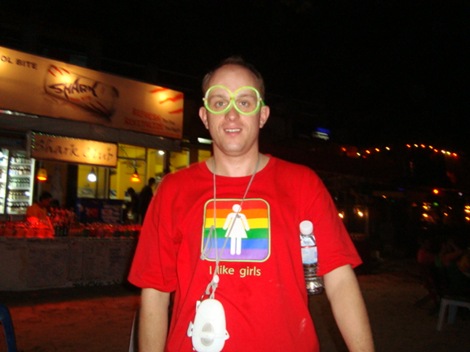 We chilled at the room before the party.  We all got ready for the big night. 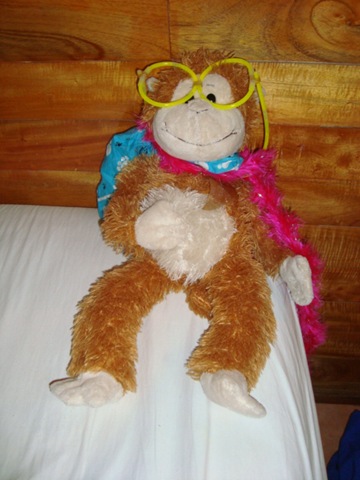 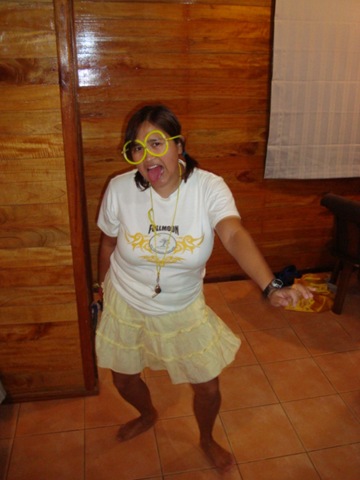 A mushroom shake doesn’t sound good to me.  I think a banana shake would be better.  Unfortunately, the electric was out on Mushy Mountain.  So, the bars were all lit by candles. 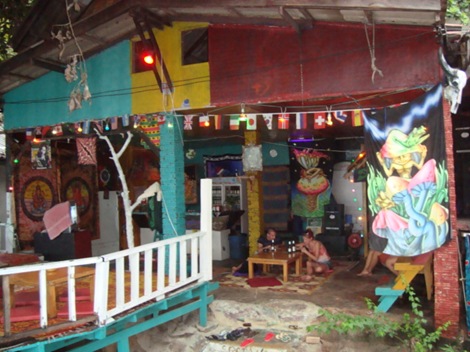 There was going to be good music at one of the bars – but there was no power.

We headed to the party. 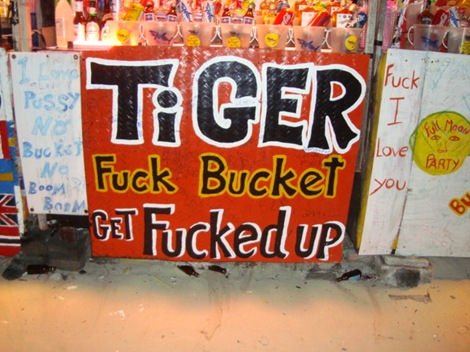 There are tons of stands selling buckets of alcohol.  They have funny things on their signs like Fuck I love you.  Ivan and Jennifer each got a bucket.  I had a banana juice I bought from the convenience store. 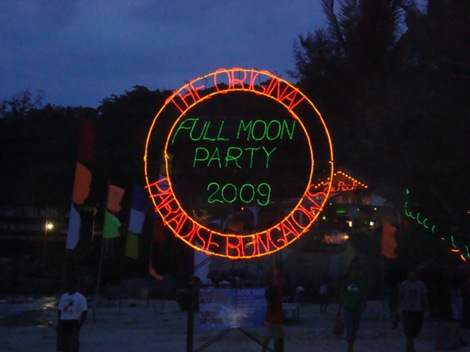 There are different bars all along the beach.  Tommy Resort has the best music of house.  There’s one bar playing R n’ B, another playing a mix of techno and drum n’ bass, and so on.  There were a few places doing body painting. 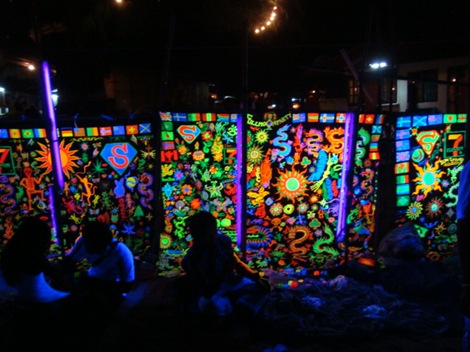 But, it was useless since it was raining.  It takes a few minutes for the paint to dry.  It was raining so we had to wear our rain jackets.

We didn’t bring the camera when we were dancing.  Jennifer didn’t want to lose it or get the camera all wet.  We kept going from each bar and dancing.  If we got bored of the music, we would just move on.  It’s slow season – so, I’d say there was about 10,000 people there.

A few strange things that happened.  Jennifer looked funny with the rain jacket since it went down to her ankles.  A few girls wanted to take a picture with her.  A man fell in the sand since he was so drunk.  Jennifer helped him up.  Then, he started dancing with her.  He fell again because he was really drunk.  Jennifer saw a girl crying and she was hugging her boyfriend.  Jennifer hugged them both.  She told the girl it was alright.  Then, a Western girl started hugging them as well.

It stopped raining around midnight.  We were happy to dance without the rain jacket on.  There are no port-a-potties at the Full Moon Party.  Everybody just goes pee in the sea.  Yes, both guys and girls do it. Monkeys too! It was so fun dancing to many types of music.  We all danced for 5 hours.  Jennifer and I went back to the room.  Ivan wanted to dance more.  Jennifer read.  I went to sleep.  The music was so loud so it was hard to sleep.  Ivan came back a little later.  Ivan and Jennifer went to sleep.  Jennifer put her earplugs in, but it only blocked out some of the music.  We only slept a few hours that night – probably 4 hours.  It wasn’t good sleep since you would wake up because of the music.