Ivan, Jennifer and I had lunch at Moon Dolphin Restaurant on April 7, 2009.  Ivan got the spicy noodles with chicken.  Jennifer got the fried rice with pineapple and chicken.  I got the spaghetti with chicken and bananas.  Ivan didn’t get the same noodles – instead he got really thin noodles.  The food was good.

Ivan and Jennifer watched part of the movie SiCKo.  I watched cartoons on Jennifer’s iPod.  It started raining really hard.  We thought that it would stop shortly.  But, it didn’t.

We didn’t want to go far since it was raining so hard.  We went to the Bayshore Restaurant.  It’s located next to Tommy Resort.  Ivan ordered a tomato soup and a tuna burger.  Jennifer had spaghetti with chicken.  I had a stir fried chicken and banana dish.  The food was okay….but Ivan was disappointed that his tuna ‘burger’ which actually just tinned tuna, inside a roll…. 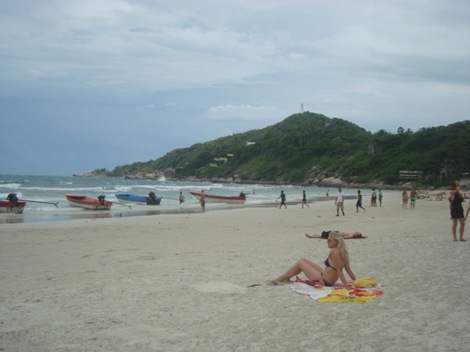 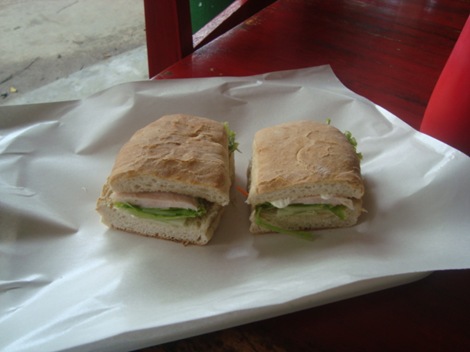 The sandwiches were really good.  Ivan was still hungry.  He got a falafel from across the street.

We walked around town.  I saw some cool banana flip flops. 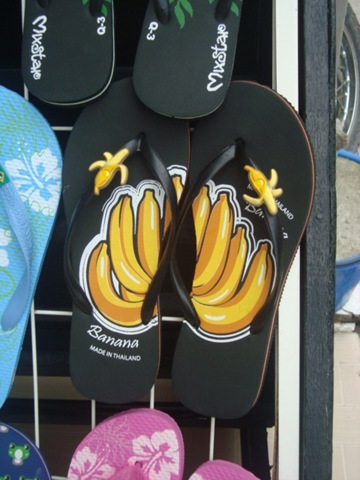 I was sad that they didn’t have monkey-sized flip flops.

We went to chill by the pool. 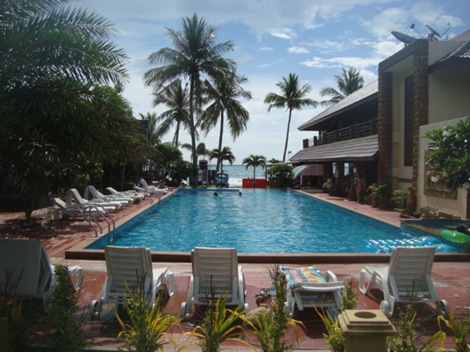 Ivan swam a little.  Jennifer and I read while lying down on a lounge chair.  It started raining.  So, we gathered everything up and went to our bungalow.

We walked to Emotion of Sushi for dinner.  The restaurant is nice inside.  The restaurant gives you edamame to snack on.  Ivan Jennifer got some cold sake.  They ordered two miso soups and lots of sushi rolls like eel, tuna and shrimp.  They ordered a main dish of chicken teriyaki.  The chicken teriyaki was really tough and barely tasted of teriyaki.  It was barely edible and certainl not worth the money they were asking for it. Ivan told them it was terrible and sent it back.  The sushi wasn’t good either.  The ingredients weren’t flavorful.  The rice was mushy.  I had a few banana sushi rolls.  It wasn’t too good.  I’m glad I brought along two bananas just in case.  The check was brought to us.  They didn’t take off the charge for the bad chicken teriyaki that we sent back.  The waitress said hold on.  The French owner came from downstairs.  Ivan said that it didn’t taste good and the chicken was really tough.  He said Are you sure?  Ivan said Yes.  The owner wasn’t very nice.  He didn’t even apologize about the chicken.  He did take off 200 Baht on the check, which was the price of the chicken.  The French owner started talking to the staff in the kitchen.  He was shaking his head like he was disgusted.  We went downstairs and the employees at the bar were giving us bad looks.  I don’t know why they’re mad at us.  We’re not the ones who made the terrible chicken teriyaki.  They should hire better cooks.  If you’re ever in Ko Phangan, I’d avoid this restaurant.  The food isn’t good at all.  It was the worst sushi that we’ve ever had. I think French people should stick to making French food, and not attempt to make Japanese..Its like the way that if you go into a restaurant that has a monkey chef – you just KNOW that you are going to get dishes made from bananas…why? Because bananas are something that monkeys DEFINITELY know how to cook! If a monkey started trying to cook food that didn’t contain bananas…it would be a disaster!

It started raining.  We chilled at a bar.  Ivan and Jennifer had a Sex on the Beach drink.  I had a banana shake.  We wished that the rain would stop.  We couldn’t decide if we should head back.  Ivan thought we should head to the pool party.  We hopped into the free taxi.

We arrived at the Coral Bungalows.  Everybody was seated in the bar area which is covered.  It was pretty crowded.  Ivan ordered a bucket.  It was still Happy Hour so the bucket was 200 Baht.  Happy Hour is from 9 – 10 pm.  Jennifer found a table in the corner.  People were having fun.  Nobody was really dancing though.  It wasn’t raining as much.  There were two guys doing a fire show.

We sat down by the pool.  It was showering only a little now.  Ivan wanted to head home though.  The rain certainly doesn’t make things fun.  We got a taxi back to Tommy Resort.

I fell asleep.  Ivan and Jennifer watched a few episodes of Lucky Louie.  Ivan went to get sandwiches in town.  They went to bed shortly after.