Ivan, Jennifer and I had lunch at The Food Gallery on March 21, 2009.  Ivan and Jennifer started off with an apple and tuna salad.  I ordered the Pad Thai with bananas.  Ivan had Pad Se-Eaw with chicken.  Jennifer ordered the spaghetti carbonara with chicken instead of bacon.  The food was really good here.  The portions weren’t that big, but it managed to fill us up.

We drove back to the Big A Resort. 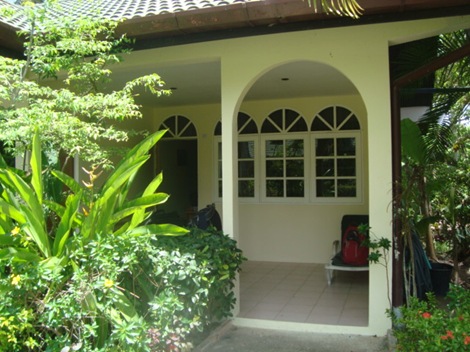 It was time to chill out for a few hours.

Ivan and Jennifer wanted to see the Phuket Stunt Show.  We left around 6:30 pm.  Ivan drove us to the show.  There was a buffet included for 400 Baht more.  The show would begin at 8 pm.  The buffet wasn’t anything special at all.  There was only maybe 7 dishes total and then fruit for dessert.  I’m glad I didn’t pay for the buffet.  There was no banana dishes available.  It’s not a monkey friendly buffet.  I had a banana and honey sandwich that I made earlier.  The show is owned by Rock City.  So, there’s a big ape by the entrance. 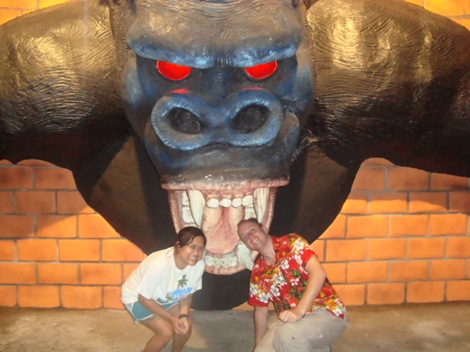 There was an Australian guy announcing all the stunts in the show.  The stage is really big.  There were lots of high dives into the water.  We also saw whips that broke balloons and a fire show. 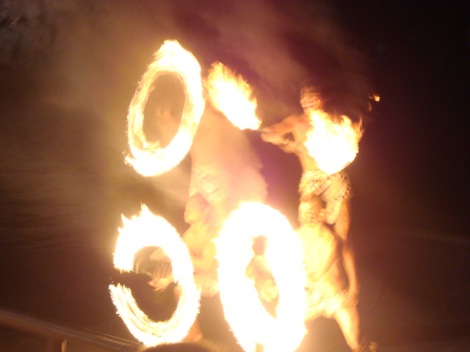 A guy was driving a jetski around and doing stunts.  We saw a few people doing silly things off the diving board like bouncing on their butt on the board and then falling into the water.  A 10 minute intermission came next.

The second half of the show was a pirate fight.  The good guys were on a big ship.  The captain was trying to fight a certain treasure.  They weren’t having any luck in finding it.  A few minutes of searching later, they found the silver vase.

From afar, pirates saw that they discovered treasure.  They planned to steal it from them. The pirates drove their boats to the big boat.  The good guys and pirates fought against each other with swords or fighting.  The pirates tied up the good guys.  They also kidnapped the captain’s daughter.  They took her back to the pirate hideout.

The captain was really mad.  He had a plan to get the treasure back and his daughter.  The good guys planted a bomb near the pirate hideout.  Then, they went to the pirates hideout and got the captain’s daughter.  The treasure was retrieved as well.  The pirates came back and took the daughter again.  The captain said he’d trade the treasure for his daughter.  The daughter got away in the water.  The captain wouldn’t hand over the treasure.  There was more sword fighting.  The treasure was knocked into the water.  The local village guy found it and kept it.  Ivan thought the show was okay.  It was entertaining.  Jennifer thought it was cheesy.  I thought it was alright but it would have been better with monkeys.  There’s always at least one pirate who has a monkey on their shoulder. There could be a monkey duel between the pirate monkey and the good guy monkey.  Now that would be exciting!  It’s never been done before.

We had lunch at The Family on March 22, 2009.  Ivan had a falafel again.  Jennifer tried the chicken gyro.  It was okay.  I had a falafel with bananas.  Ivan and Jennifer shared the hummus with hot mushrooms.  The food tasted good.  The prices here are very reasonable.

Ivan, Neal and Nom went up to the Big Buddha.  Jennifer was being moody and thought it was too hot to do anything.  Jennifer helped me with the blog.

Ivan, Jennifer, Neal, Nom and I went to MK Restaurants for dinner.  I had a banana and chicken sandwich.  Ivan, Jennifer and Neal shared the shabu shabu. 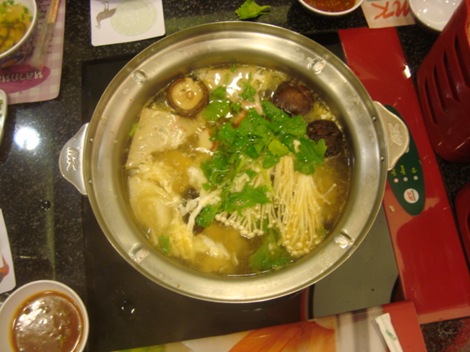 They put in chicken, mushrooms, tofu and noodles.  They thought the food tasted was really good.  It definitely filled them up.

Nom wanted some dessert.  We drove to Swensen’s.  Ivan and Jennifer had the strawberry sorbet. 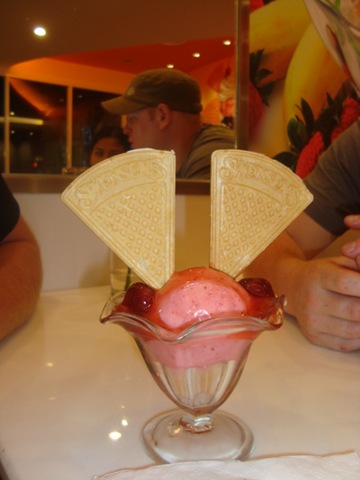 They loved it!  I had a scoop of banana ice cream with bananas on top. It was delicious.  Ice cream always makes everybody happy. 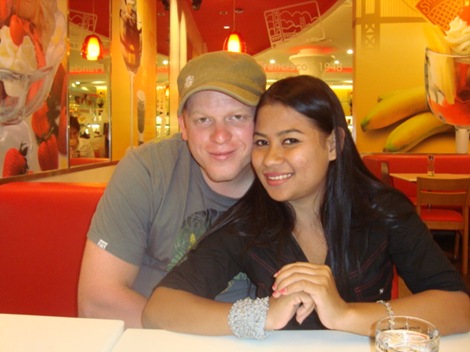 We drove to Happy Days.  Everybody had a drink.  I had a nice banana shake.  We chatted for awhile.