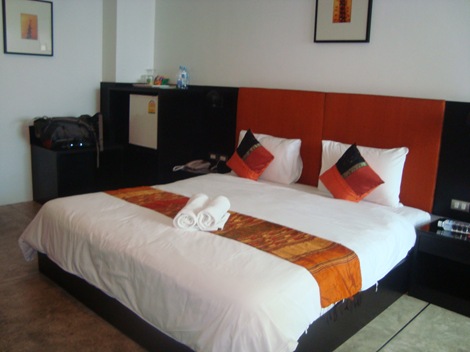 The rooms are very modern.  It was a good clean room.

We were hungry since we didn’t eat yet.  We went to one of the hotel’s restaurants PG’s Diner.  Ivan ordered a chicken pad se-eaw. 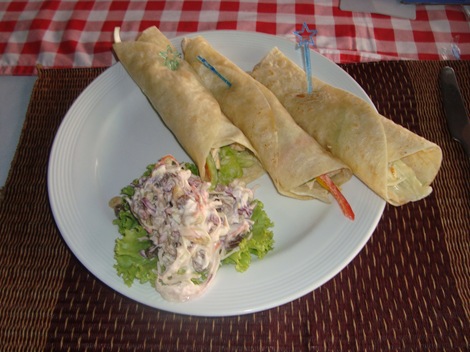 Jennifer got the grilled chicken caesar salad wrap.  I had a chicken and banana salad.  The food was alright.

We walked around the area of Patong.  Ivan and Jennifer bought a few new t-shirts.  I stopped by the Banana Nightclub.  It’s open for monkeys during the day.  At night it’s a nightclub for people.

I was invited to the back room.  The big monkey bouncer asked me what the password was.  I had no clue but I said banana.  I was right!  I was taken to the banana back room.  It’s filled with special bananas from all over the world.  There were a lot of aged bananas.  The monkeys were shocked that I knew the password.  They thought it was a security breach.  The monkey group had to think of a new password.  They spent several minutes debating on a new password.  They settled on monkey.  They all agreed that this would be safe.  I tried a few bananas from Africa and Australia.  They were exotic and tasted really good.  They had a very unique taste.

It was a hot day out.  We walked around some more.  We decided to head back to the hotel to rest.

We got picked up from the hotel.  Ivan, Jennifer and I were going to see Simon Cabaret.

It’s an entertainment show with ladyboys.  The theatre was really big.  There were tons of tourists there.  Unfortunately, picture taking isn’t allowed during the show.  A warning was shown stating that taking pictures could lead to a $50,000 USD fine.  The show had lots of dancing and singing.  The costumes were very pretty and colorful.  The different sets were really good.  There were two parts that were supposed to be funny but weren’t.  Jennifer kept trying to figure out which ones were ladyboys.  But, Ivan said they were all ladyboys.  It was hard to tell. Ivan was really bored.  Jennifer thought it was like a Vegas show girl show but with ladyboys instead.  After the show, the ladyboys were all lined up.

The audience were allowed to take pictures with them for 40 Baht per ladyboy.

We were all hungry since it was already 9:00 pm.  Ivan wanted to check out Banana’s Tacos.  It’s right down the street from the hotel.  It was formerly called Banana Sombrero.  The restaurant serves authentic Mexican food.  I ordered the Banana Flauntas on special request.  Ivan and Jennifer shared guacamole and chips.

Ivan ordered chicken fajitas while Jennifer got a chicken quesadilla and a chicken taco.  The food was great.  Jennifer loved her chicken taco.  She wished that she ordered two.  Ivan and Jennifer each had a strawrita (strawberry margarita).  We were so stuffed from dinner.  We headed back to the hotel to get some rest.