Ivan, Jennifer, Neal, Nom and I had lunch at Linda’s Seafood on March 19, 2009.  It’s located on the beach.  I had a banana soup.  Ivan and Jennifer started off with a spicy mango salad.  It was okay.  Ivan ordered a fish curry.  Jennifer got glass noodles with chicken.  The food was alright.

Ivan went to do more muay thai training in the afternoon.  Neal decided that he only wanted to do two days of training.  So, this was their last training session.  Jennifer and I stayed in the hotel.

It started to rain.  We drove the motorbike to Thai @ Siam for dinner.  Ivan and Jennifer started off with fresh spring rolls.  Then, the salmon tartar came out.  I ordered the prawns and banana dish. 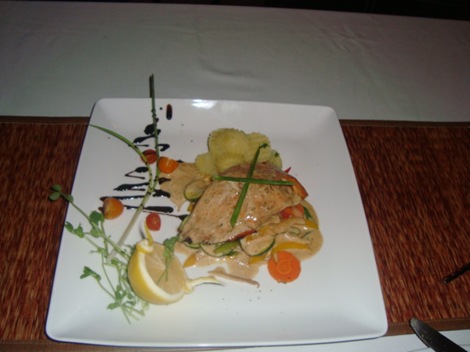 We checked out of Villa Liberg on March 20, 2009.  It’s a nice place.  But, the water that came out of the sink was slightly yellow in our room.  We drove to the Big A Resort.  We checked into our room.

Ivan, Jennifer Neal, Nom and I rode the motorbikes to The Family Restaurant.  It’s very close to the resort.  Ivan and Jennifer each ordered a falafel.  I got a banana and chicken gyro.  Ivan, Jennifer and Neal shared the tahina and hummus with pita.  The food was really good!

Ivan and Neal drove the motorbikes around Phuket.  They smoked some shisha.  Jennifer and I relaxed in the room.

We drove to Mr. India for dinner.  I ordered a chicken and banana curry with a banana naan bread.  Ivan and Jennifer shared chicken tikka, chicken madras and a garlic naan bread. 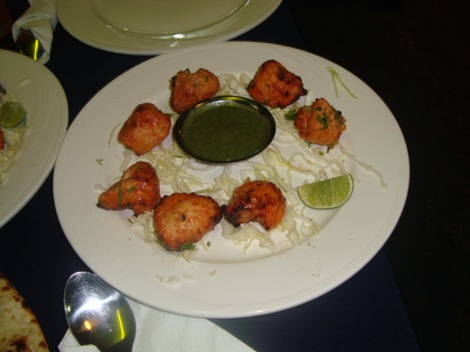 The food was alright here.

We took a taxi to the Badla Stadium.  There was a couple muay thai boxing fights tonight.  One of the guy’s from Pat’s Kiat Than Anchot gym was fighting tonight.  We met one of the trainers at the gym.  He got Jennifer and Nom in for free.  I guess it’s free for Thai women.  It’s good that Jennifer looks Thai.  We sat down on some red couch chairs in the second row.

We watched the guy from the gym fight.  He’s really young. 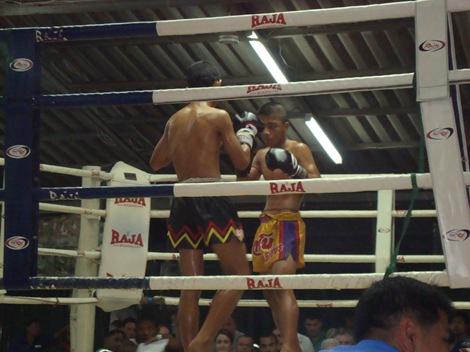 He did good, but the other fighter beat him by points.  Muay Thai is tough.  The fighters don’t wear any protection except for their teeth. 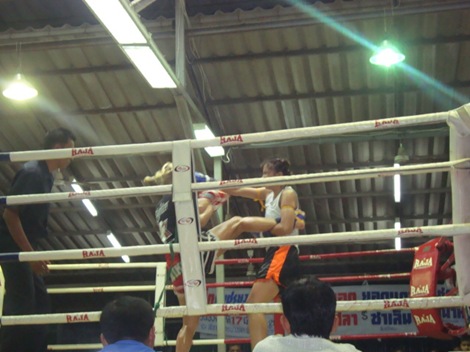 We saw two unfair fights.  They would put a Thai man against a Western guy.  One fight, there a Thai man who was really skinny against a muscular guy.  He got knocked out in the first round.  The other fight had an older Thai guy against another muscular guy.  He got knocked out after a few rounds.  It was fun watching the fights.  It was first time seeing muay thai fights for me and Jennifer.  They should have monkeys do muay thai.  That would be really interesting and fun.  I bet it would be a big crowd pleaser.

We wanted to check out the Patong area.  It’s filled with restaurants, bars and nightclubs.  We hopped into a taxi to Patong. 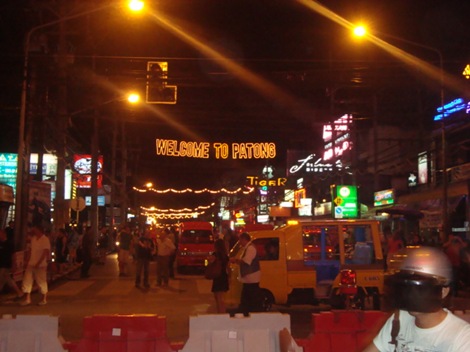 Neal said we should check out Hollywood Club.  Nom and Jennifer got in for free and a free drink coupon.  It’s free for Thai women.  More money saved for Jennifer for looking Thai.  It was really quiet in the club.  But, it was only 10:30 pm.  It doesn’t usually get busy until 1 pm or so.  Everybody got a drink.  I had a nice virgin banana daquirri.  It was good.

We walked around the main road.  Ivan heard about Rock City.  It’s a bar that has live bands.  The bar has two cool statues outside of the entrance to the bar. 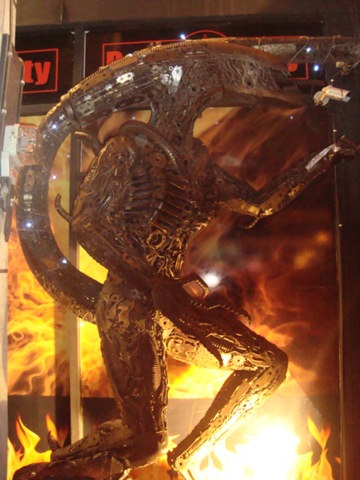 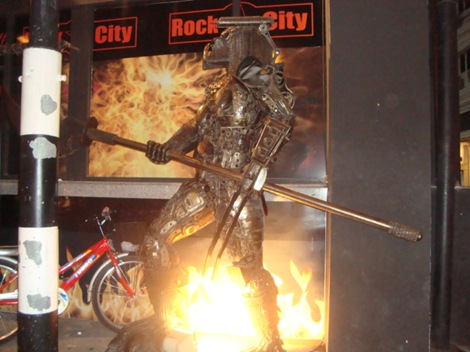 There’s a cover charge of 100 Baht at the door.  Jennifer got in for free for looking Thai.  There was a good band on.  Unfortunately, it was the end of the set.  It turned out that the lead singer is Filipino. 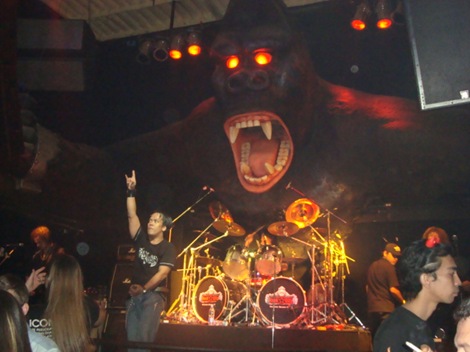 A few minutes passed by, then another band came on.  They were good but the last band was better.  The guy’s voice sounded like he just smoked a whole carton of cigarettes right before he went on stage.  They played covers of some good rock songs.

Nom wanted to dance.  So, Neal and Nom headed back to Hollywood Club.  We watched the band for awhile.  Ivan and Jennifer had a few drinks. 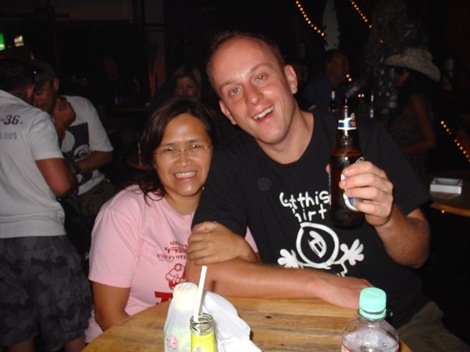 We walked down the main road.  We ran into Neal and Nom.  Neal said that the Hollywood Club was too busy and loud.  We headed back to the Rock City.  The band played until the end of their set.  We decided to head back to the resort.  It was a fun night!