Ivan, Jennifer and I checked out of the A. Venue Hotel Suites on March 17, 2009.  Ivan set up a taxi early.  We put our backpacks into the trunk of the taxi.  We were heading to the airport.  Today, we would be flying to Bangkok, Thailand.  Then, a flight to Phuket.  Ivan told the driver we wanted to go to Clark Airport.  It would take about 2 hours to get there.

We were driving for over two hours.  The driver stopped to ask for directions.  He didn’t know where the airport was located.  We were in Patangas.  Jennifer and Ivan said it was in Angeles City.  The driver said that he said earlier if it was in Patangas.  I guess there was a Clark airport there.  Ivan asked how long it would take.  It was 11:50 am at this point.  Our flight was at 1:30 pm.  The driver said it would be 1 hour and a half.  Ivan said hurry we have to make our flight.  We made it to the airport at 1 pm.

The Cebu Pacific counter was empty.  Finally, Ivan asked a guy if we could still check in.  The guy said let me ask Immigration.  A lady checked our bags in.  We went to Immigration which was empty.  The lady handed us our tickets.  We were then off to the plane.  We were so lucky that they let us check in with 30 minutes to go.

The flight went by pretty fast.  I listened to Jennifer’s iPod and took a monkey nap.  Ivan and Jennifer watched a movie on the laptop.  The flight arrived 30 minutes early.  It took us 3 hours to reach Bangkok.

We went to lunch in the airport.  Ivan and Jennifer went on the internet.  Ivan was trying to see when his brother Neal and his girlfriend Nom were arriving.  Ivan found the muay thai gym we were staying at tonight.  We’d be arriving a few hours earlier than Neal in Phuket.

We boarded the plane at 6:45 pm.  The flight was an hour and 10 minutes long.  We got our backpacks and headed outside.  Ivan told   the taxi service we wanted to go to Kai Than Achot Muay Thai Gym.  Nobody knew where it was located.  Finally, there was somebody who knew.  We booked a taxi.  The price was quoted as 150 Baht.  We hopped into the taxi.  The driver took us to a muay thai gym.  It turned out to be the wrong one.  Ivan asked a guy at the gym if he knew where Kai Thai Achot was located it.  He wasn’t sure.  We went back to the airport to find somebody who could tell the taxi driver how to get there.  We couldn’t find anybody who the directions.  Ivan and Jennifer took our backpacks out of the taxi.  The driver was telling them to keep it in the car.  Jennifer said no way it’s our stuff.  Ivan told the driver we just needed to get the address or a phone number to the gym.  The driver said You pay more now.  We said that you didn’t take us to the right place.  It turns out that the internet cafe was already closed.  There was internet access but it cost $5.  Ivan found the owner’s Facebook page.  It had a phone number on it.  The taxi driver came over with Security.  He told us that we needed to pay.  Ivan and Jennifer explained that he took us to the wrong place.  The Security guard thought the whole situation was funny.  They left to figure it out.  The Security guard came back and said that we didn’t have to pay since he didn’t take us to the right gym.

We had the taxi service call the Pat at Kai Than Achot Muay Thai Gym.  He gave the driver the directions.  We were going to put our things into the car.  The taxi driver said it was now 300 Baht.  We said no it should still be 150 Baht.  Jennifer said that the Security guard told us that the last ride was free.  We walked to the taxi service to get another taxi cab.  We booked a taxi for 200 Baht.  Somebody on a forum said the gym was 5 minutes away.  But, the driver said it was actually farther.  We all went into the taxi.  The drive to the gym was 10 minutes away.

We were greeted by Pat.  He’s the owner of the gym.  Neal had taken muay thai lessons last year in Phuket at another gym.  He knew Pat from there.  We were taken to our room.  It had a big king sized bed, a tv and a fan.  Pat brought in a refrigerator with water and yogurt.  Pat showed us that Neal would be staying in a basic hut that was located outside.  Ivan, Neal and Jennifer wanted to do muay thai training for a few days.  Neal planned to do it for 5 days.

We chilled in the room for awhile.  Neal would be arriving after 11 pm.  We drove with Pat to the airport.  Neal’s plane had landed already.  We saw Neal and Nom.  They loaded their luggage into the car.  We drove to a local place to eat.  Ivan and Jennifer got pad se-ew to eat.  I just had two bananas.  We went back to the gym to sleep.

Ivan woke up early to train on March 18, 2009.  Jennifer is not a morning person.  She slept in.  Ivan thought the muay thai training was good.  The bed in Neal’s hut was really small for two people.  Pat didn’t know that Nom was going to be there.  Neal told Pat that Nom didn’t like the room.  Actually, he didn’t like it.  There was only one squat toilet and one shower area in the whole place. We packed everything up.

Pat drove us around.  We looked at a few places.  We finally checked in at Villa Liberg.  Ivan and Neal each rented a motorbike.  We drove to The Golddigger’s Resort for lunch.  Ivan had tomato soup and a tuna sandwich.  I had a pad thai with bananas.  Jennifer had pad thai with chicken.  The food was alright.

Jennifer wasn’t feeling so good.  She passed on the training.  Ivan went to do more muay thai training.  Jennifer played Grand Theft Auto Chinatown Wars on the Nintendo DS.  I used the internet.

Ivan saw the sign to Thai @ Siam earlier.  We wanted to check it out.  Ivan drove us to the restaurant Thai @ Siam.  The entrance is very welcoming. 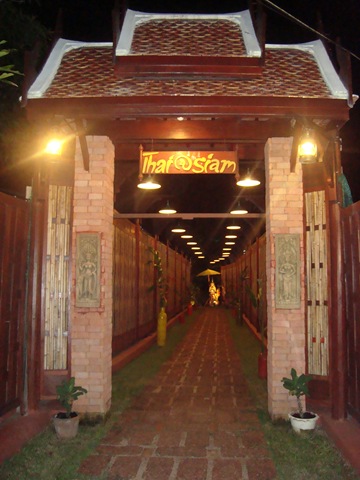 The restaurant consists of two floors.  It’s really big.  It looks like it has accommodation as well.  We sat upstairs.  The menu has Thai and Western appetizers and main dishes.  Ivan and Jennifer started off with the Whole Steamed Prawns with 2 dips and the aharn wang 5 sahai (5 sampler).  The sampler comes with lobster stuffed mushrooms, fresh spring rolls, crispy fried noodles, fried prawn cakes and shrimps wrapped in egg noodle. 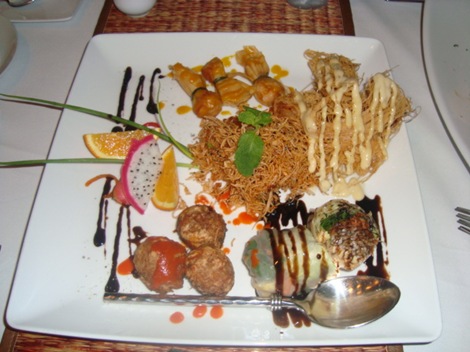 I ordered the banana stuffed chicken.  Ivan and Jennifer’s main course was the paprika chicken.  They were out of curly fries and zucchinis.  So, they ordered spinach, mushrooms and cucumbers. 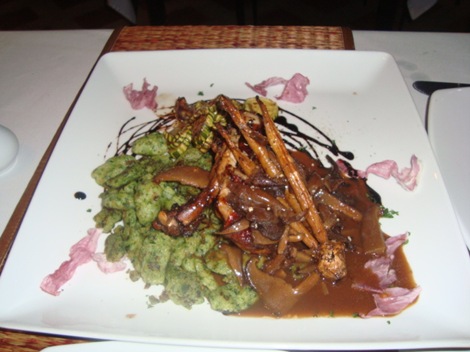 The food was so delicious!!  Ivan and Jennifer wanted something sweet.  They ordered a scoop of chocolate chip ice cream and raspberry champagne sorbet.  The ice cream comes in a glass with fresh fruit on top.  The sorbet was really tasty.  This is a great restaurant.  The prices are a little expensive though.  It’s definitely worth it though.