Ivan, Jennifer and I packed our backpacks up on March 15, 2009.  We checked out of the Tropicana Castle.  We hopped onto a boat headed to Batangas. 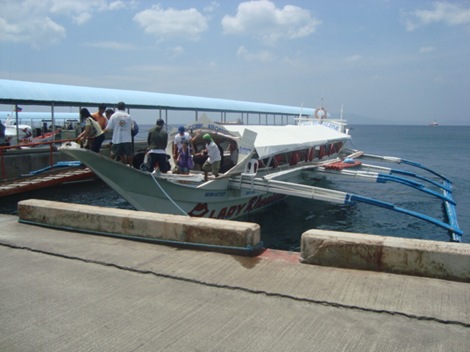 The boat left at 10:30 am.  Ivan and Jennifer watched a movie called Smiley Face.  Jennifer was feeling a bit sea sick.  Ivan suggested looking at the water or the horizon.  It did make her feel better.  The ride took only an hour.  It usually takes an hour and a half.

Ivan found a private car to Makati – a city in Metro Manila.  It took 2 hours to get to our hotel.  We checked in to A. Venue Hotel Suites.  Everybody was really hungry at this point.  We walked to the A. Venue Mall.  There we found a Japanaese restaurant called Suta Misha.  I ordered the banana sushi.  Ivan had the Udon with chicken.  Jennifer got a bento box with chicken teriyaki.  The bento box came with miso soup, tempura vegetables, rice, salad and an iced tea.  The food was good.

Ivan and Jennifer both took a shower.  Jennifer called her cousin Cheekee to see if they were home.  She said that her family would be going to church.  They would be back in an hour.  After we were ready, we took a taxi to Manila.  We were visiting Jennifer’s cousins, uncles and aunt.

We got to the apartments.  Uncle Boy and Jennifer’s cousin Nat were visiting.  Ivan and Jennifer talked about their travels around the Philippines.  Jennifer also got to see Cheekee and Bon Bon this time. 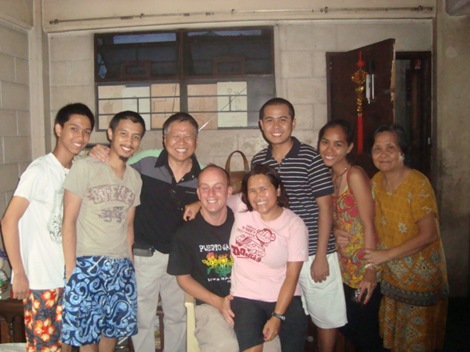 Uncle Boy was trying to convince Ivan to eat balut.  It’s a fertilized duck or chicken egg with an almost developed embryo inside.  Jennifer has never had this.  She didn’t think Ivan would like it.

Ivan showed off his hypnotism skills and hypnotized Jennifer.  He wanted to hypnotize one of her cousins.  Ivan did get a chance to hypnotize her cousin Lance.  It was funny because he thought his name was Susie.

Auntie Aning had somebody buy some balut.  Ivan wanted to watch Nat eat it first.  First, you open up the shell at the top.  Nat drank the fluid.  The egg is actually a dark black color.  You can actually see the chick with feathers and the beak. 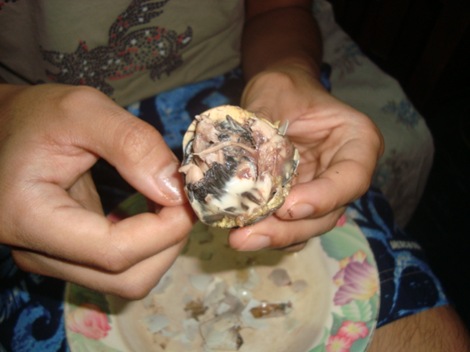 Ivan was sickened just watching Nat eat it.  Nat couldn’t think about too much about what he was eating or it would make him stop.  Ivan passed on eating it.  He thought it would be really small.  Nat said it does taste like a hard boiled egg.

Ivan and Jennifer had some chicken for dinner.  I was given two bananas.  It was good.

Uncle Boy was taking us to karaoke.  We hopped into two cars and drove to the 21 Plaza Family KTV.  Ivan got a few tambourines at the main desk.  Everybody sang some songs.  Jen’s cousin ordered some snacks and her uncle ordered some drinks. 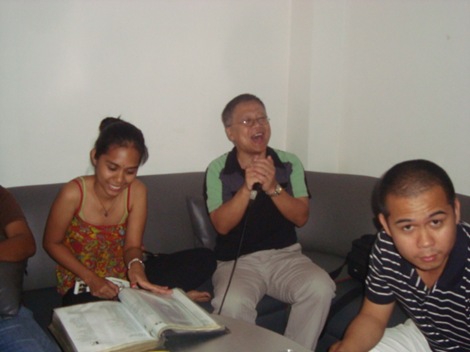 It was definitely good fun!

Jen’s cousin Bon had school early the next morning so they were leaving soon.  Jennifer told Bon that we would stay to sing more karaoke.  Ivan and Jennifer said goodbye to her cousins and uncle.  Ivan got a smaller room for us.  We ordered a few drinks.  I had a nice mango and banana juice.  I sang The Monkees’ Daydream Believer.  I had fun bouncing around on the couch. 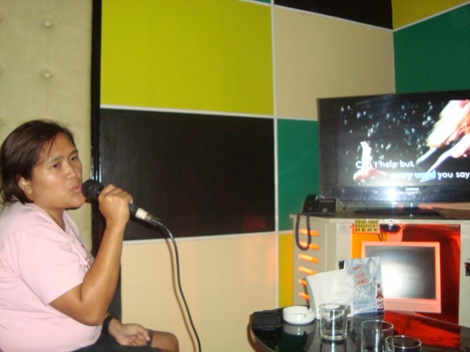 We were disappointed that the smaller rooms didn’t have a disco ball inside.  We sang for 2 hours.  Ivan and Jen love singing karaoke in the private rooms. 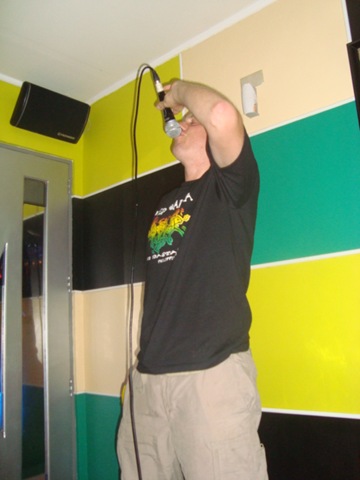 It’s great because you can sing as much as you want.  Also, you don’t have to wait your turn.  We hopped into a cab back to our hotel.

We went to have the free breakfast buffet at the A. Venue Hotel Suites on March 16, 2009.  I brought along two bananas.  Good thing since there were no bananas at the buffet.  Ivan and Jennifer had an omelette and some toast.

We went back to the room to relax for awhile.  Ivan and Jennifer used the internet.

It was time for lunch.  We walked to the A. Venue Mall.  We looked at the restaurants.  But, we decided to go to Suta Misha again.  Ivan ordered the Soba with chicken.  Jennifer got the chicken teriyaki.  I had the Udon with Bananas.  The food was really good again.

We hopped into a taxi going towards Greenbelt.  Greenbelt is a big place filled with shopping and restaurants.  There are 5 areas in Greenbelt.  Jennifer found a spa.  She booked a facial and a wax.  It was going to be about an hour and a half.  Ivan and I went shopping.  Ivan bought a few things.  I didn’t find any monkey shirts or bananas.  I’m glad I brought one to snack on.  We met Jennifer at the spa.

Ivan and Jennifer checked out the menu at Cafe Havana.  The restaurant has an outside eating area.  There are bands playing every night as well.  The menu is bigger than the Cafe Havana located in Malate.  Ivan thought we should come back to eat in about 30 minutes.  We walked around the mall checking out the different restaurants.

We sat down inside in Cafe Havana.  Ivan and Jennifer each ordered a tasty mangojito.  I had a banana shake.  They started off with their favorite appetizer the black bean hummus. 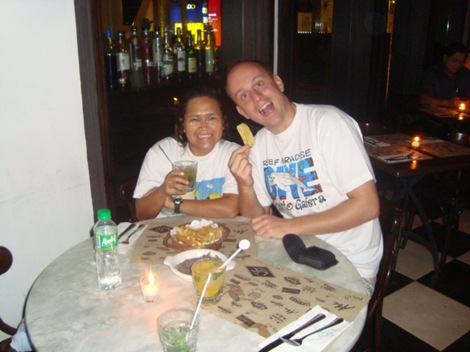 I ordered plantains and rice.  It’s not on the menu – but they agreed to make it for me.  Ivan ordered the half boneless chicken.  Jennifer got the garlic prawns. 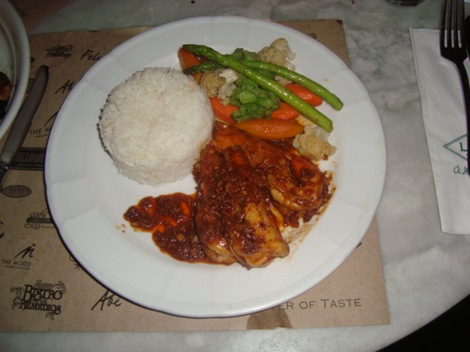 Jennifer thought her prawns were okay.  Ivan and I liked our food a lot.  Jennifer was still a little hungry.  Ivan and Jennifer ordered the mango crepes.  It was heavenly.