Lounging on the beach

Ivan and I heard the chickens again early in the morning.  Jennifer put her earplugs in before going to sleep.  Ivan asked if we could move to a room far from the six chickens.

We settled down on lounge chairs at Crystal Sand on March 2, 2009.  There are many lounge chairs that are in front of resorts.  You can sit on them if you buy drinks.  But, some are more exclusive for the guests of the resort.  Ivan got the menu.  Ivan and Jennifer each ordered a tuna sandwich.  I got a banana and chicken adobo dish.  The food was alright.  Ivan and I ordered a nice banana shake.  Jennifer got a mango shake. 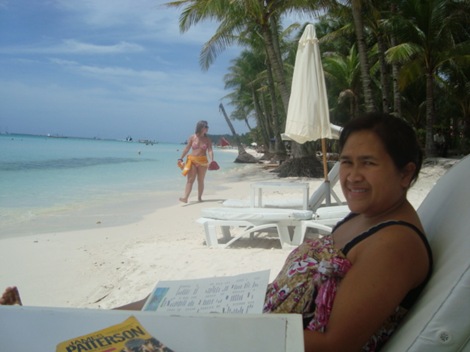 We chilled on the lounge chairs and read.  Ivan and Jennifer also went swimming in the sea.  The famous White Beach on Boracay is beautiful.  It’s not crowded.  The water is a gorgeous clear blue color.  It’s definitely the best beach we’ve all been to.

Ivan read about the Bamboo Lounge in the Philippines Travel Guide book.  He left his Lonely Planet book at a hotel – so he had to get a new one.  We walked there and sat down.  Ivan thought it would be nice to see the sunset from here.  Since there were many clouds, the sunset wasn’t the best I’ve seen – but it was still nice. 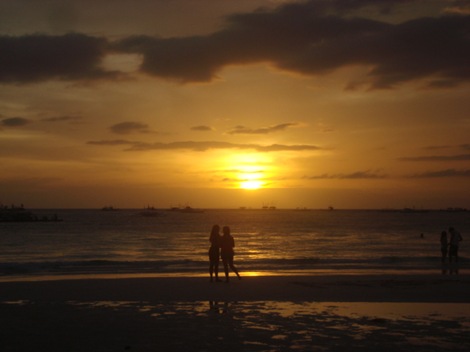 We did have a nice drink at the Bamboo Lounge.  It was happy hour so the cocktails were 25% off.  A lot of the bars have happy hours on Boracay.  The hours really vary though.

We stayed in the room for a little while.  Soon, we were all getting hungry.  We walked toward D’Mall.  Ivan and Jennifer wanted to eat at the Italian restaurant Aria.  I told them I was meeting up with my friends at Hungry Monkey.

I saw Roger and Mike waiting at Hungry Monkey.

They brought along a friend named Nina.  She was a cute monkey girl.  I ordered the sizzling fish with banana. We all had a good time laughing and chatting.  I’m sure you can guess our favorite subject was bananas.  We explained our best banana experiences.  I have enjoyed spending time with my new buddies.

Ivan and Jennifer were happy to eat some pasta.  They started off with a great eggplant dip.  Ivan ordered the fettuccine with garlic and chili.  Jennifer got the fettuccine with a seafood sauce.  The food tasted alright.  The fettuccine is homemade – it’s really light.  They walked back to Frendz.  I was already there dreaming about bananas.

We moved to a new room far from the chickens on March 3, 2009.  The rooms are nice at Frendz Resort.  The staff is very friendly. We walked to Nigi Nigi Nu Noos for lunch.  I had a banana soup and chicken and banana lumpia shanghai (fried spring rolls).  Ivan ordered a chicken and vegetables dish.  Jennifer got the chicken satay.  It was a good meal.

It was time for more lounging on the beach.  I like chilling on the lounge chairs under an umbrella.  It can get so hot and humid though.  I usually just have a banana shake to cool down.  If that doesn’t work, I spray some water on my face.  Ivan laid down on his floatie. 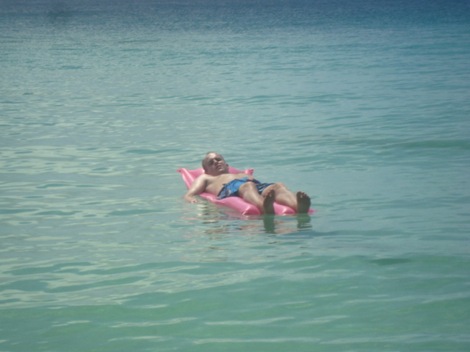 We went to Bamboo Lounge again.  Ivan and Jennifer each got a mangojito.  I got a banana and mango shake.  The drinks are great here. 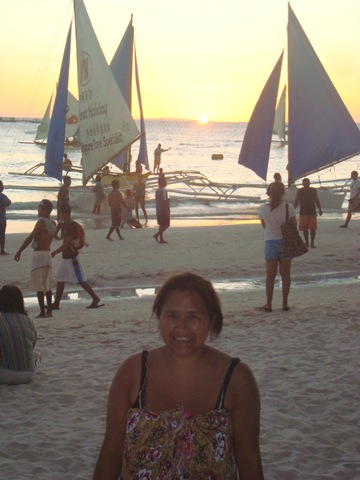 The sunset turned out nice.  We were happy about that.

We went to Shogun for dinner.  It’s a Japanese restaurant that also has shabu shabu.  We ordered the shabu shabu.  Ivan and Jennifer ordered fish balls, mushrooms, mussels, shrimps and chicken with a seafood broth.

I got my own with chicken, fish balls and lots of bananas.  It’s fun putting in the ingredients and swishing them around.  The shabu shabu tasted great!  It really fills you up too.

We walked to the MO2 Wave.  The band The Boss was playing.  We found out later that only part of the band were performing.  The bass player was singing the songs.  His voice was alright.  The guitar player was awesome though. 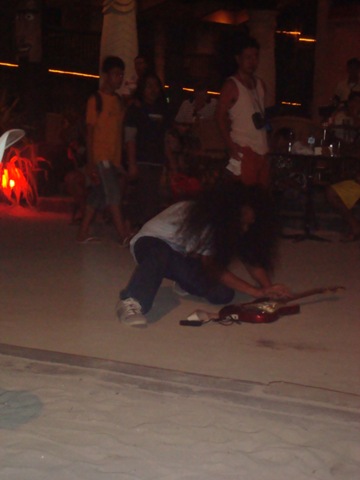 He played the guitar with his mouth.  Amazing!  We were planning to come see the band again.