Ivan, Jennifer and I checked out of Casa Escano on February 28, 2009.  We hopped into a cab heading towards the airport.  We were going to be in Boracay later today.  We boarded the small PAL Express plane going to Caticlan. 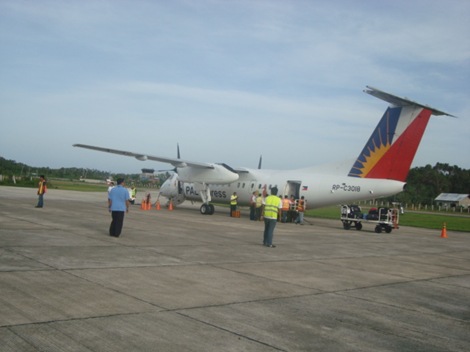 You can feel the movement of the plane more when you’re in a small plane.

Next, in Caticlan we got onto a boat headed to Boracay.  The guide book says it takes 30 minutes.  Actually it’s only a 10 minute ride.  I’m sure that depends on the water conditions.

We took a tricycle to Frendz Resort.  We were dropped off on the street. There’s no sign to the resort – so we passed by it.  Ivan asked somebody where it was located.  They should put a sign near the entrance.  There’s one but on the side where you enter from the beach not from the street.  We were greeted by Steve, who’s one of the owners of Frendz.  He said we should come back for a welcome drink.  We placed our backpacks into the room.

In a few minutes, we were back in the common room.  Steve bought Ivan and Jennifer a San Miguel Light.  I had a banana juice.  It was a nice gesture.  The staff also brings out chips and peanuts to snack on.  We chatted with the guests and Steve.  We heard some horror stories that some people have had while traveling.

A few people from the hostel wanted to have dinner.  We decided to join them.  Steve recommended a Mexican place nearby.  The restaurant was Manana.  We walked there and sat down.  Ivan ordered the chicken fajitas.  I had the tuna and banana tacos.  Jennifer got the chicken enchiladas.  The food was okay.  It wasn’t too flavorful.  Some of the group wanted to get a drink.  We walked to Summer Place and sat down.  Everybody ordered a drink.  It was nice chatting right on the beach.  The rest of the group went back to the resort.  We decided to walk around the beach.  After a few minutes, we walked back to the resort for some sleep.

I think around 5 am or so – we heard chickens making noise.  It was so loud!  I had to cover my ears with my hands.  Jennifer put her earplugs in.  It sounded like the chickens were in sync.  Ivan didn’t sleep much.

We walked to the beach to get some lunch on March 1, 2009.  We sat down to eat at Hawaiian Bar-B-Que.  Ivan had the fish.  Jennifer got the Mango Chicken.  I got Chicken and Banana BBQ dish. 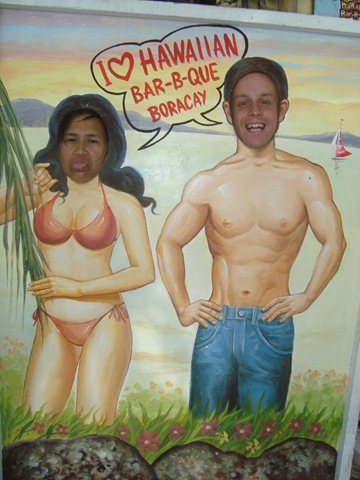 We walked along the beach.  Ivan heard about the delicious shakes at Jonah’s.  We found it and sat down.  Ivan got the Mango and Banana shake.  Jennifer got the most famous one that has Papaya and Mango.  I ordered a Banana shake with extra bananas – my own creation.  I told the server that she could call my concotion Bananas Overload.  It could be marketed towards monkeys.  I’m sure it would be a hit with the local monkeys!  The server said she would let her manager know.  Wow!  The shakes were so scrumptious.

It was great for us to walk around – so we could walk off lunch and the shakes.  Ivan and Jennifer went swimming for a little while. 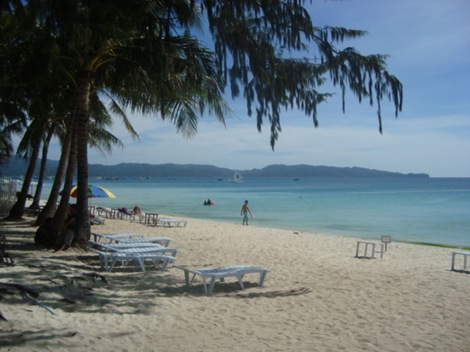 I decided to check out D’Mall.  It’s a place filled with shops and restaurants.  I found a great place called Hungry Monkey.  It’s the local monkey hangout.  I made a few friends. I told them I would be back later for dinner.  I went back to Frendz.  Ivan and Jennifer were already there relaxing.  I told  them about the cool monkey hangout I found.  They were glad I made some new friends.

I walked back to Hungry Monkey at dinnertime.  I saw my friends Roger and Mike.  There were lots of banana dishes on the menu.  This was monkey heaven for me!  I ordered two banana crepes.  The crepes were delicious.  I talked about my travels with Ivan and Jennifer.  Roger and Mike told me about their life on Boracay.  They’re both banana inspectors for the island.

Ivan and Jennifer heard about Crafts of Boracay from Steve at the Frendz Resort.  Two guys from the resort asked Ivan and Jen if they wanted to go to dinner at Crafts of Boracay.  The Indian restaurant is located on the roof of a big shopping center.   One of the guys ordered two orders of Vegetable Samosas for the table.  Ivan and Jennifer enjoyed the samosas.  Ivan ordered the chicken korai and naan bread.  Jennifer got the chicken masala.  The chicken in the dishes weren’t boneless.  They didn’t like that.  The food was okay. The portions weren’t that big and the food lacked flavor.  They headed back to the resort after dinner.