Ivan, Jennifer and I ate breakfast at Spicythai hostel on January 26, 2009.  We packed everything up.  We checked out of the hostel. There wasn’t availability at the hostel.  The hostel allowed us to store our backpacks for the day.

A van picked us up and were taken to the Chiang Mai X-Centre.  The X-Centre has many things to do like go-karts and bungee jumping.  Ivan and Jennifer wanted to do the Zorb ball first.  It’s a big ball where two people are strapped in.  The ball is pushed down a hill.  There’s another option called the washing machine – where you aren’t strapped in and water is put in the ball.  I decided not to do the Zorb since I knew it would give me a killer headache.  They were strapped in and pushed down the hill.  Ivan and Jennifer thought it was so fun.  It only lasted about 45 seconds. Here’s a video of the Zorb ball:

The go-karts was our next stop.  Ivan and Jennifer were given an outfit to protect their clothing.  Ivan and I were in one go-kart.  Jennifer rode in her own car. 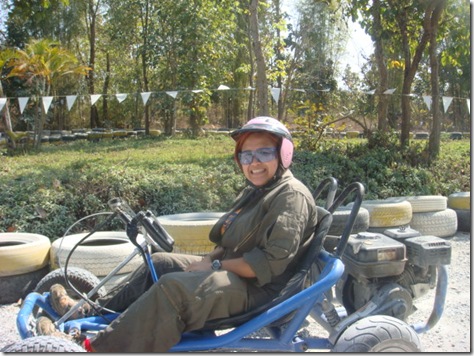 The track was a dirt road so it was easy to slide around.  We were the only ones on the track – which was pretty nice.  Ivan and Jennifer kept racing against each other.  It was fun riding in the go-karts.

Next, we all hopped into one buggy with Ivan driving.  Ivan’s brother recommended the buggies.  It was time to for off-road buggys.  We were actually driving on the street.  Then, we drove through a village.  Then we were off.

Our guide didn’t take us too fast.  So, it wasn’t too fun.  Also, it’s dry season in Chiang Mai.  If it was wet season, we would be driving through mud and getting covered in it. One of the other buggies had brake problems.  Then, it turned out another buggy had a flat tire.  We had to wait for somebody to bring a new tire.  The riding around was okay.  It would have been nicer to go faster though.

The van took us back to the hostel.  We walked across the street to Amari Rincome Hotel.  We checked in and given a room.  The room turned out to have two small beds.  Ivan told the front desk that we wanted one big bed.  The hotel ended up upgrading us to a suite for the night.  The room was huge.  It had a bedroom, one and half bathrooms and a living room.

There were also two balconies.  We decided to take advantage of the room.  So, we ordered room service.  I liked chilling in the living room and the balcony.  I watched cartoons that night.  Ivan and Jennifer watched Wanted in the bedroom.

We checked into a regular room at the Amari Rincome on January 27, 2009.  It was a relaxing day.  Ivan and I chilled at the pool.  Jennifer stayed in the room and watched tv.

For dinner we went to the Palm Garden and Steakhouse.  I ordered Baked Ziti with Bananas.  Ivan got the Spinach Lasagna.  Jennifer ordered the Beef Lasagna.  The food was pretty good here.