Ivan, Jennifer and I checked out of Gong kaew Huen kum on January 24, 2009.  I was sad to go since I enjoyed the free bananas.  We took a tuk-tuk to Spicythai Backpackers Hostel.  We checked in and put our backpacks in the room.  We wanted to see some animals today.  We stopped by Amazin’ Sandwich for lunch.  I tried a peanut butter and banana sandwich.  Jennifer said that was Elvis’ favorite sandwich.  Ivan got a tuna sandwich.  Jennifer got a chicken sandwich.  The sandwiches tasted great.

We hired a tuk-tuk to take us around today.  We drove for a long time.  We reached the Mae Sa Elephant Camp. We made it right in time for the elephant show at 1:45 pm.  The elephant show was a lot of fun.  The elephants came out playing harmonicas.  There were some that were twirling hula-hoops on the trunks. 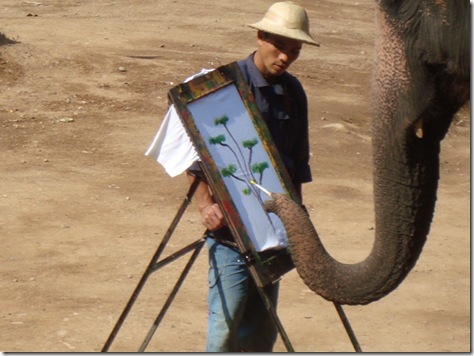 They didn’t even have any help at all.  Amazing!  The elephant’s paintings were being sold.  The show ended and everybody wanted to feed the elephants.  Ivan and Jennifer gave bananas to the elephants.  Jennifer gave me four bananas to hand out.  I gave one to an elephant and then one for me.  The show has inspired me.  I want to learn some tricks.  I think it would be fun and entertaining.  Maybe I can earn some bananas.  I might start learning how to play an instrument.

Next, we went to the Mae Sa Snake Farm.  The show would be on in about 30 minutes.  We walked around the farm.  There have many animals like birds, rabbits, peacocks and one monkey.  I felt bad for the lonely monkey – he was all by himself in a cage.  I gave him some of my banana.  We saw a spitting cobra.  it kept hissing and spitting towards Jennifer.  She was a bit freaked out.

We went to sit down in the bleacher to watch the show.  Since the show had snakes, we picked a seat higher up.  The show had men capturing different snakes like cobras. 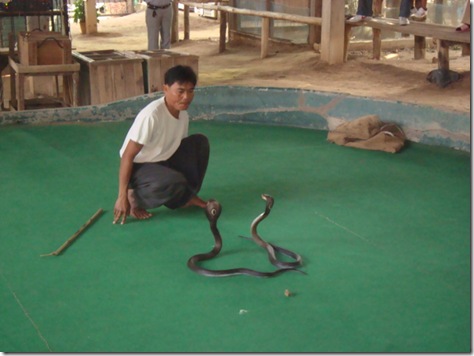 There was a cobra that had it’s fangs in a covered cup.  The cobra’s poisonous venom was coming out. 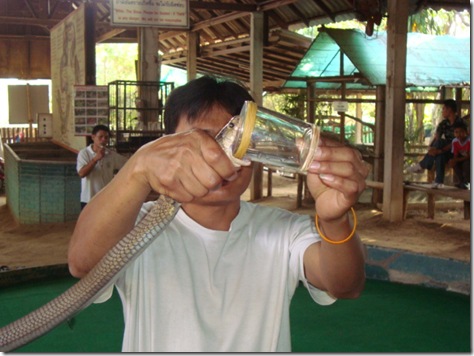 We also saw the fangs of the cobra.  The men would throw a snake towards the edge of the ring.  But, a few times, the snake would get out.  This scared us and we moved up further.  The show was good.

We went to the Tiger Kingdom for our last stop.  There are different packages you can get.  You can play with big tigers, small tigers and newborns.  We picked to play with the newborn tigers.  The tigers were 6 months old.  We got to pet them.  Jennifer was posing with one of the tigers.  The tiger bit her – it didn’t hurt though.  There’s men in the cage who hit the tigers with a yellow stick when they misbehave. 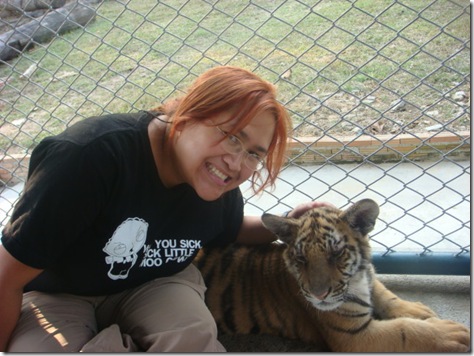 It was cool playing with the tigers.

We had breakfast at the Spicythai hostel on January 25, 2009.  We had another chill day to relax.  I do love how we participate in so many activities.  It makes things exciting.  But, getting a chance to take a break is good.

The hostel was having History of Chiang Mai with a drop off at the Sunday Market.  Noom took a truckful of people and one monkey to one of the Gates of Chiang Mai. 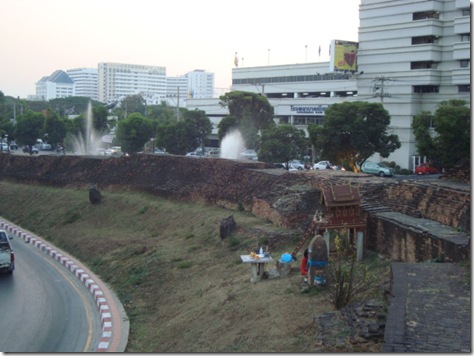 He told us about the history of Chiang Mai.  We were then dropped off at the Sunday Market.  It’s located on Walking Street.  It’s filled with unique items made by people from a nearby local village.

The market is really big.  You can find t-shirts, souvenirs and food stalls.  Ivan and Jennifer had dinner here with sushi and some local foods.  I got a Pad Thai and added a banana to it.  This market is so much better than the Night Bazaar.  We walked so much that night.  We went back to the hostel to get some rest.