Ivan, Jennifer and I checked out of the Amari Rincome Hotel on January 28, 2009.  We left our luggage to be stored.  We hopped  onto a big tuk-tuk.  The group consisted of 9 people and one monkey.  Today, we were starting our 2 day trek.  Ivan said that the trek would be easy.

Our first stop was the market.  Ivan bought some bananas for the elephants.  One of the activities planned was elephant riding.  I grabbed a banana to snack on.  There was a cute little dog at the market.

We were driven to the forest mountain.  Everybody got out and we followed our guide.  We were climbing up the mountain.  The trekking was so hard.  Jennifer was struggling.  I don’t blame her, it seemed to be uphill most of the time.  Even, Ivan thought it was It turned out that elephant riding was happening the next day.  To my dismay, Ivan passed out bananas to the other people.  I get four bananas for later on.  We walked for about 3 hours.  We were always the last of the pack.  It was a hot day.  Good thing, we were covered with the trees for most of the time.  Jennifer was mad about the trek since she doesn’t like climbing uphill.

We arrived at a house for lunch. 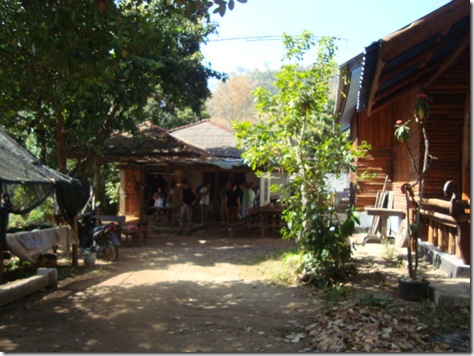 Pad Thai with chicken was being served.  I added some bananas to my Pad Thai.  The food tasted real good.  We rested a few minutes after eating.

We set off again, headed towards a village. 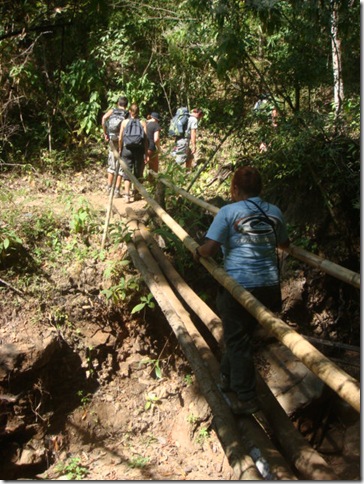 The walking wasn’t as hard this time.  A few cabbage fields surrounded us at the end of our journey. 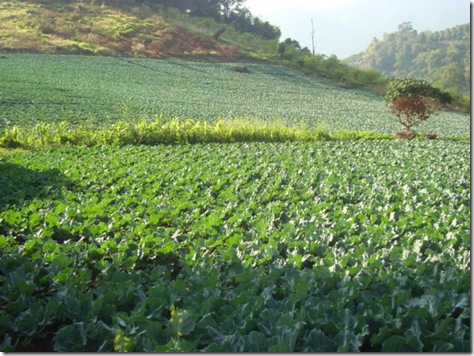 We arrived at the village.  It had a big hut for our sleeping area on the top level.  There was also a big dining area next to the kitchen on the next level.  Across from the kitchen was the cooking area.  The lower level had an area for the elephants.

Ivan and I visited the elephants.  Jennifer sat down in the dining area and watched the kids play. 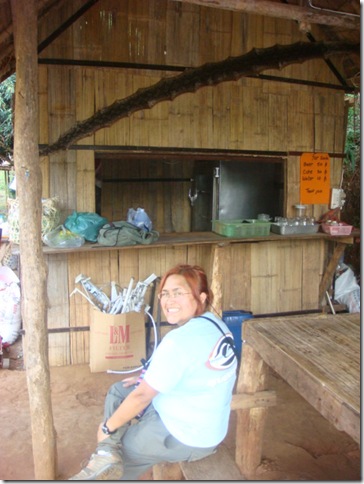 The village was small with only a few people living there.

It was time for dinner.  The group sat down on a long wooden table. The dishes served were green curry and cabbage, vegetables and tofu.  Of course there was rice available.  I grabbed a dish of green curry and put one banana in.  It was yummy.  Ivan thought the cabbage dish wasn’t too good – so he just ate the tofu.

We thought it was a lovely meal.  The group chatted for awhile.

There was three guides total.  Some people were doing three day treks.  One of the guides said we could start a fire.  He built it up and everybody sat around the fire.  Ivan brought his iPod speakers.  He started playing some good music.  The fire was really hot. 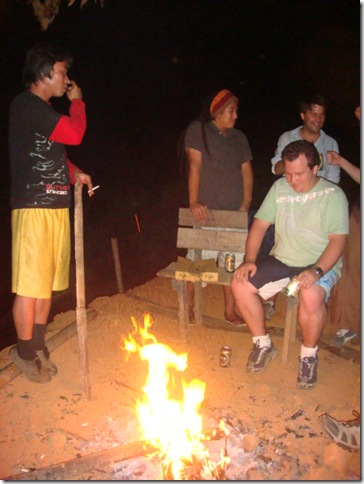 We had fun talking and listening to loud music.  We went to bed since we were all tired.

We woke early on January 29, 2009.  We joined the group to have breakfast in the village.  Coffee and tea were available to drink. 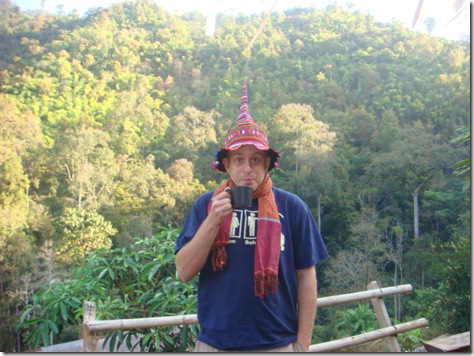 Scrambled eggs and toast was served.  I had bananas on toast.

Jennifer’s thighs were sore from the walking the previous day.  We went on elephants through the forest.  I was seated with Ivan and Jennifer.  The elephants were really hungry.  They kept stopping to eat bamboo trees and plants.  Our elephant tore down a small bamboo tree. 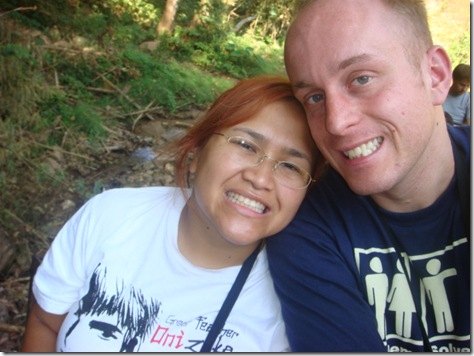 We liked the elephant riding.

We started trekking again.  It was a bit hard again.  But, we didn’t walk that long.  There was a waterfall by the platform we stopped at.  The group split up.  Some of the people were doing a three day trek.  Our new group was Ivan, Jennifer, me and a French couple. 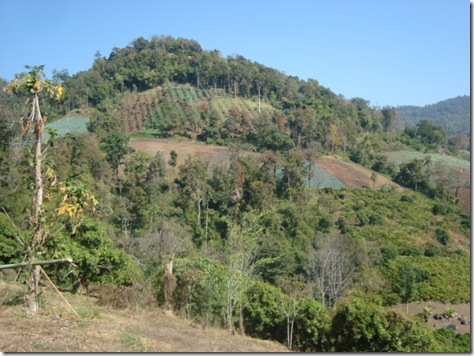 The scenery was nice.  We stopped for lunch.  We chilled for awhile.

We got a ride in a tuk-tuk.  We headed towards the river.  It was time for white water rafting and bamboo rafting.  Unfortunately, we couldn’t bring our cameras since they would get wet.

We stepped inside a plastic boat for white water rafting.  The guide taught us how to move our boat.  The rapids weren’t that fast since it’s dry season.  It was the first time for me and Jennifer.  The rafting was so much fun.  Sometimes we’d get stuck.  But, the guide told us what to do.  I wish we did the white water rafting for longer.  The boat stopped by a few bamboo rafts.  We transferred to a bamboo raft.

We had a new guide.  We sat on the bamboo raft and wet our butts. The raft kept sinking into the water.  Our raft floated down the calm river easily.  After the rafting, we headed back to the tuk-tuk.  We were driven back to the Amari Rincome Hotel.

We gathered up our backpacks.  Ivan and Jennifer changed out of wet clothes in the bathroom.  We packed the bags up.  Tonight, we were taking a plane to Bangkok.  We took a tuk-tuk to the airport.  We had a nice hour long flight to Bangkok.

We arrived in Bangkok and took a taxi to the Admiral Premier.  We checked in.  We began getting ready for bed.  We were so weary  and slept.  Jennifer’s stomach wasn’t feeling good.  She fell asleep later than Ivan and me.