Temples and the Landmine Museum

Ivan, Jennifer and I woke up early on December 15, 2008.  We got into a tuk tuk and headed towards the temples.  Our first stop is Angkor Wat, the most famous temple.  It’s huge!  It was really hot out.  So, it was better walking inside the temples to keep cool. 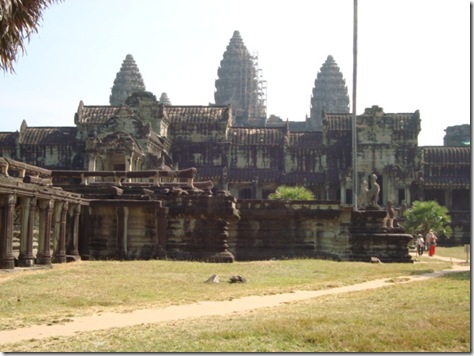 There’s pictures of ladies on the wall and many statues around the temple.  Next, we went to Ta Prohm.  It’s famous for the trees. 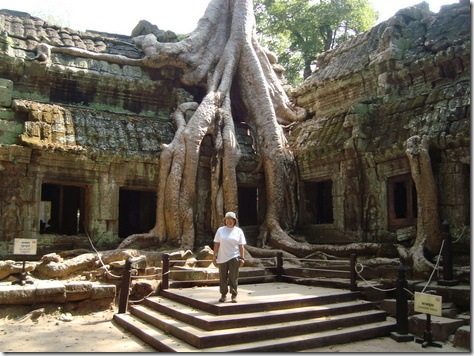 We saw so many other temples like Ta Keo, Thomma Nom and Chau Say Thevoda.  We went to another famous one called Bayon.  It has some great faces on the big towers.  The ladies look like smiling Cambodian ladies. 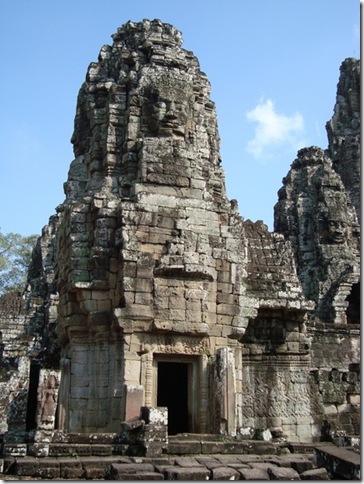 There’s also some great carvings on the walls that showed a story. 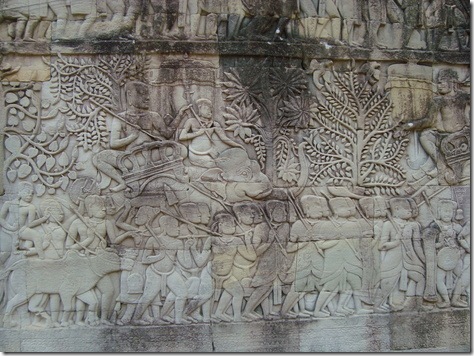 We did so much walking.  We were templed out on day one.  It was amazing to see these great temples.  We agreed that they start looking the same after awhile.  We did all these sites in one day.  Ivan read that some people spend all day just in Angkor Wat.  I guess they thoroughly look at everything.  I think that would be rather boring and tiring.

We noticed monkeys at the side of the road.  Ivan asked the driver to stop.  These monkeys were tame.  Ivan bought two bags of bananas.  He handed one to me.  Ivan and Jen fed the monkeys.   The monkeys would peel the bananas and eat them. 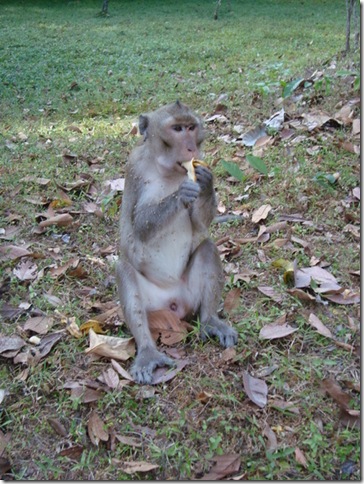 I wanted to feed them, but I kept the bananas for myself.  I don’t think the monkeys liked that.

For sunset we went to a great Phnom.  The sunset was alright.  It was cloudy so it wasn’t as impressive.  You could see Angkor Wat in the distance.

That night, we went to Viva Mexican for dinner.  Ivan had the chicken fajitas.  Jennifer ordered the pollo asada.

I got a Mexican banana pizza.  The food was quite good.  Ivan and Jennifer enjoyed a mango margarita.  It didn’t taste anything like mango though.

That night we went to Madam 1 for a massage.  Ivan and Jennifer got the four hands massage.  I was next door for my one monkey massage.  It was the same cute monkey named Suzy.  She gives a great massage!  Ivan and Jennifer had a great time with the ladies.  They were laughing during most of their massage.  We definitely needed a massage after the long day of temples.

On December 16, 2008, we went to Pub Street for lunch.  We went to Khmer House.  Ivan had the fish amok while Jennifer got the chicken amok.  I ordered the fried rice with pineapples and bananas.  The food was okay.  The dessert was nice though – fried bananas with honey and butter.

We took a ride to the Cambodian Land Mine Museum.  Akira is a man who was in the Khmer Rouge and planted land mines in Cambodia.  But, later on he started removing mines.  The museum also houses land mine victims.  There were lots of mines and other war items like guns in the museum. 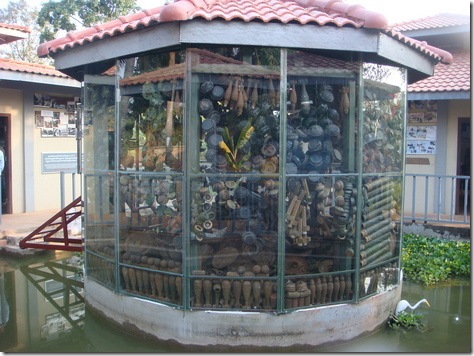 On the side, there was a fake land minefield.  Posted on the wall were stories about land mine victims.  Ivan talked to Akira about removing mines.  There’s a new international law that makes removing mines a longer process.  He reckons that it’s not as safe.  He wishes that he could teach people to remove them his way.  This would be a safer and faster way about it.  Akira invited us to remove mines the next day.  But, we’re headed to Battambang tomorrow.  Ivan thought it might be boring most of the day since they would have to search for them.  Jennifer thought it might be dangerous.

For dinner, we went to Le Tigre de Papier for pizzas.  Ivan and Jennifer started off with a nice papaya salad.  Ivan had a vegetarian pizza.  I had a banana pizza.  Jennifer got the margarita pizza.  Ivan’s pizza wasn’t too good because of the cheese.  We walked around Pub street and then went back to the hotel to sleep.