Ivan, Jennifer and I met up with two local couchsurfer girls on Sunday, October 12, 2008.  They both were named Winnie.  One of the Winnie girls thought we should go to a wanton noodle shop that was near by.  So, we went inside to order.  Ivan had the fish ball soup.  Jennifer got the shrimp dumpling wanton noodle soup.  I asked the chef to make some fried banana wantons for me.  It was really tasty!  Everybody wanted dessert.  Ivan and Jennifer shared this dish that had bean curd sheet in a milky substance and it had a boiled egg as well.  It was different, but they seemed to like it.  Winnie had walnut paste.  Ivan and Jen tried it and thought it tasted similar to chocolate.  I just got sliced bananas with honey on top.  A nice simple dish, but anything with bananas is usually good.  The meal was rather small.  Ivan and Jennifer weren’t full from that meal.  I think the Winnie girls are so skinny because they don’t eat much.

We walked to a park a few minutes away.  There was a dog event going on.  Dog owners could show off their dogs.  The park had sticks where dogs could jump over and crawling tubes.  I climbed on the sticks and tried to get the dogs to jump over the sticks.  It seemed better when the owner would jump over a stick, then the dog would follow his or her example.

There were different varieties of dogs like Corgis, basset hounds, Chihuahuas, beagles and dachshunds.  Jennifer let me play for a little while.  I was chasing around a few of the smaller dogs.  It was good fun!  We kept looking and the dogs and petting them.

We saw a lot of cute dogs.

Ivan, Jennifer and I went out that night since it was our last night in Hong Kong.  We went to a Malaysian restaurant called Good Satay.  It was really good food there.  We wanted to find a good bar next.  There’s some bars that actually allow young monkeys inside.  I call them monkey friendly zones.  Of course, I wasn’t allowed to drink though.  Ivan and Jennifer were in search for a bar called McLovin’s Tavern.  Jennifer read about it on the internet.  They both love the movie Superbad.  So, they thought this would be a funny place to go.  The bar was actually around before the movie was released.  A lady was passing out free beer coupons at a place called Bulldogs.  It happened to be right next door to McLovin’s.  We stopped by Bulldogs for the free drink. 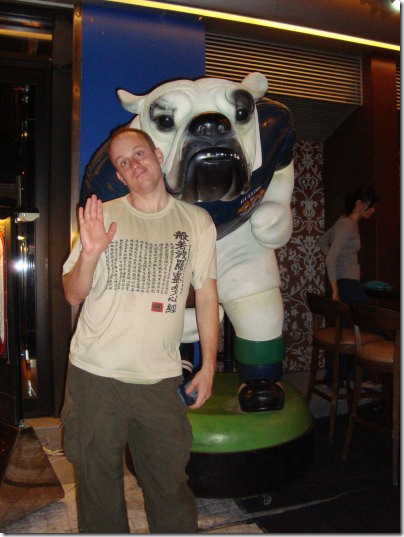 There was a band of Filipinos there.  The music was alright.  We went to McLovin’s to check it out. 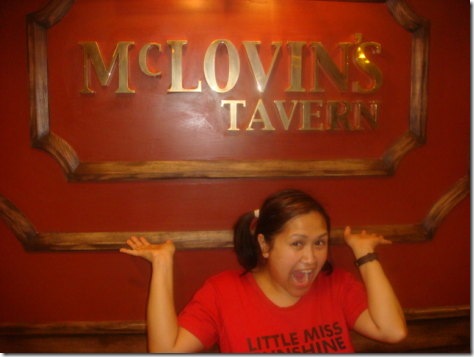 Ivan found out that the band would soon be going on.  They ordered two taffy ciders for themselves and a banana juice for me.  The band was called April Fool’s.  Everybody in the band was Filipino.  The band was really good.  There were two singers, a man and a woman.  They both had great voices.  The band were taking requests.  Ivan submitted his paper.  Unfortunately, they didn’t know any Pink Floyd songs or Crazy by Gnarls Barkley.  We were having a good time in the bar.   Ivan felt at home at McLovin’s Tavern.  Jennifer was wearing a Little Miss Sunshine shirt.  Also, Ivan wanted her to wear pigtails, so she did.  Jennifer thought she was going to get carded, but she didn’t.  At one point, the male singer said This song is for Little Miss Sunshine.  Jennifer looked at Ivan and they both laughed.  He was singing You Are the Sunshine of my Life.  Jennifer blushed since it was aimed towards her.  It’s funny and cute when she blushes.  We went home.  Our last night in Hong Kong was fun.

On October 13, 2008 we checked out of Tom’s Guesthouse at the Chungking Mansion.  Ivan and Jennifer were at the internet cafe for a little while.  Ivan wanted to use the internet for awhile.  Jennifer was going to take the subway by herself with me in tow.  She was nervous because she’s never ridden the subway by herself.  She doesn’t have a good sense of direction.  Ivan told her what stop she had to go to and gave her a map of where she was going.  She was going to pick up the train tickets from Shenzen to Guilin.  We were going to be leaving for Macau tonight after we got our Chinese visa.  Of course, I had to pretend to be a stuffed animal to avoid any trouble.  Evidently, countries don’t issue monkey visas.  Jennifer said she’d leave me a few extra bananas if I behaved.  Jennifer and I went to the MTR (subway) to go to Mong Kok.  Jennifer wrote down exactly where the internet cafe was just in case.  We got there alright.  There’s many different ways to go when you are exiting the subway.  Jennifer saw the Ladies Market and decided to go that way.  We started walking and got to Nelson Street.  But, then there was a mall in the way.  So, somehow we were going the wrong way.  Jennifer only noticed this since Argyle Street turned into Cherry St.  Jennifer got all mad and started crying.  I asked her what was wrong and offered her a banana.  She didn’t seem to appreciate the gesture.  I think it’s because she’s not a monkey.  Finally, we were going the right way and got to CTS (China Travel Services).  Jennifer picked up the tickets and then we were on our way back to see Ivan.
We then picked up the Chinese visas and headed to the ferry to Macau.  The ferry ride was a bit bumpy. We checked in to the Auguster’s Lodge which is a hostel.  We were in a room with three bunkbeds.  We all headed to the see some casinos.  We saw the Wynn Hotel.  The colors of the decor remind Jennifer of the inside of the Bellagio in Las Vegas.  Next, we walked to the MGM Grand. 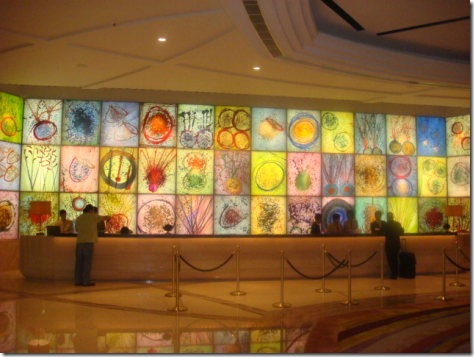 Lobby of the MGM Grand Macau

The casinos are huge in Macau.  There are many table games and not much slot machines.  The most popular game seems to be baccarat.    We ended up at the M Bar.  Ivan and Jennifer had a drink and listened to some music.  We left to go catch one of the Wynn fountain shows.  We caught the last dancing fountain show of the night.  It’s like the Bellagio fountains except it’s smaller and more intimate.  You can stand a lot closer to the show. It’s really awesome.  It has different color lights and fire.  I was watching the show on Jennifer’s shoulder. The fire came of of nowhere. I got so scared that I jumped on Jennifer’s head. She didn’t seem to appreciate that! After the show, we walked back to the hostel and went to bed.