On the 10th of October we all went to Ocean Park. It was a short bus ride away from the center of town, in Aberdeen. I had heard lots about it, as its mentioned in all my monkey Hong Kong guides. Apparently they have a few rides there that even little monkeys like me can go on!

When we arrived, we all immediately got on the cable car, as this takes you to the main section of the park. The cable car ride was quite spectacular -it went along the coast, and had amazing views of the Chinese ocean. A really nice way to spend the day. We were all starving when we arrived at the top, so had some lunch in the cafe overlooking the ocean. Ivan was disappointed that they had no vegetarian, so the chef said he would make some pasta for Ivan. I was disappointed that they had no bananas, so the chef said that I should eat something other than bananas, and I told him that was impossible because I was a monkey!

We then started exploring the park. None of us were very impressed. Jennifer said that they should rename the place ‘walking park’ – because all we seemed to do all day..was walk!!! its all so spread out, and yet there aren’t many rides at all really.  There was a jelly fish display.  It showcased tons of cool looking jelly fish. 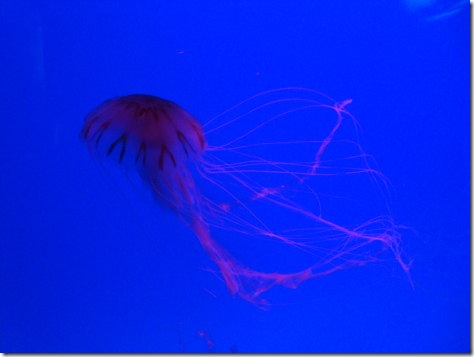 There was a log flume which we all went on – which was okay…but nothing special. I got my fur all wet , but it was so hot I dried really quickly.

I wasn’t allowed to go on the rollercoaster as I’m too small -and Jennifer was too scared-  but Ivan went on it, but he said it was nothing special at all. I think Ivan likes really fast and tall rollercoasters and this one didn’t really fall into that category. 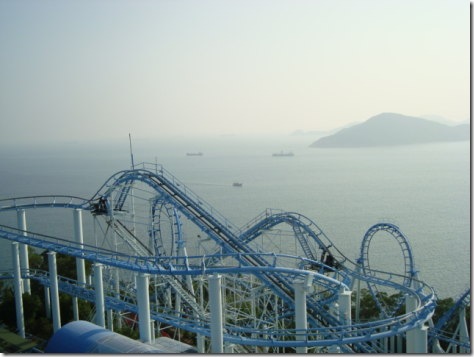 The only good thing about the place was the views – the whole park was facing the ocean and it was a lovely day so there wonderful views all day long.

We watched a show with some sea lions and dolphins and then got the cable car back down again and went to the giant panda enclosure. Unfortunately the pandas were all sleeping – so didn’t see too much there.

After the bus ride back to our hotel- we went out for an Indian meal in the Chungking mansions where we were staying. It was called the Delhi Club, and was recommended in the lonely planet. Ivan had some chicken karai and Jennifer had chicken jalfrezi. I had a banana curry, with extra banana (requested by me), a banana naan, and some banana infused rice. We all agreed that the food was absolutely amazing!! Ivan even went so far as to say that it was one of the best Indian meals of his life and He’s eaten tons of Indian food so that is quite a powerful statement! We all agreed that we would go back again the next day.

On the 11th of October, we all agreed that we should take it easy today, as we had done so much walking the previous day. We checked in to Tom’s Guesthouse located in the Chungking Mansions.  After a Japanese lunch, we went and saw a movie ‘ my best friends girl’. It was nice to be in a air conditioned place and not have to walk around.. I sat on Jennifer’s lap to watch the movie  so that I could see. She put her hands over my eyes and covered my ears at the bits which she said little monkeys are not meant to watch/hear,  but I could still hear what they were saying, and I think I’m going to ask my dad back in England if it’s okay if I use those words too, but I’m not sure if he will say yes .

We chilled at the hotel afterwards – I sent some emails to my dad, then went back to the Indian restaurant again in the evening!  Jennifer had a chicken Tikka Masala this time, but I had the same thing again and so did Ivan. We all agreed it was delicious again but that tomorrow we would eat something different. I asked them for the recipe for the banana curry, but they said it was a secret and they couldn’t tell me!!!