Buddha drinking tea while on a horse

Ivan, Jennifer and I went to Lantau Island on October 7, 2008.  Yes, another day out.  I am not used to going out so much.  We took the Ngong Ping 360 railway cars up to the top.  It takes 25 minutes to get to the top.  There’s a pole in the middle of the railway car.  I went to the top of the pole since I do like high places.  Jennifer told me not to swing around since you’re not supposed to rock the car.  She said it wasn’t safe. 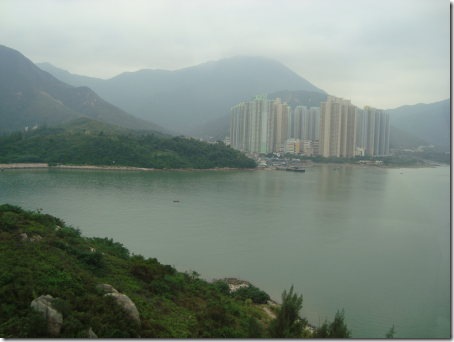 The view was beautiful in the car.  We reached the Ngong Ping Village.  Here you can see the Tian Tan Buddha and the Po Lin Monastery.  Ivan picked out a vegetarian restaurant to eat near the Monastery.  They said it didn’t have much flavor.  I was happy with my banana sandwich that Jennifer brought with her.  We walked around the village some more.  The Giant Buddha (or Big Buddha as Jennifer calls it) is quite big. 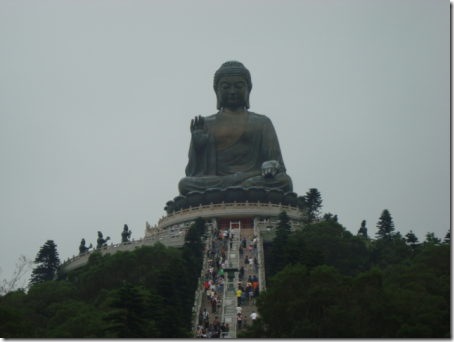 I’m not sure how they got it up there.  Next, we went to see the show in the Monkey’s Tale Theatre.  I thought it was so funny.  It was a story about three monkeys named Clever, Tag-a-long and Doofus.  Clever kept trying to get this apple that was protected by a monkey stone statue.  It was a great animated film.  Of course, I liked it since it had monkeys in it.  The moral of the story was that it’s better to give than receive. 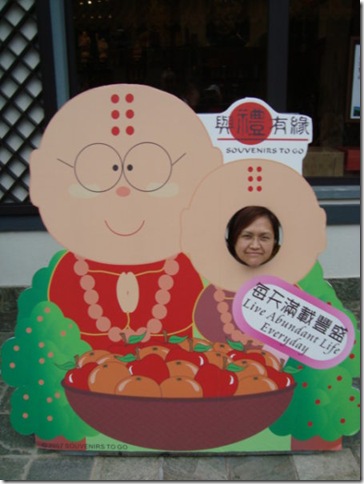 We stopped by Walking with Buddha afterwards.  It talks about a man named Siddhartha who became the Buddha.

We headed to Soho to the Take Out Comedy.  We were going to meet Michael there since he performs there.  It was open mic night.  Michael told Ivan earlier in the day he should hypnotize somebody.  But, there is a time limit of how long a person can perform.  Michael said it was fine to bring your own alcohol since the comedy club didn’t serve any drinks or food.  Ivan and Jennifer bought some Subway and  wine a few coolers.  Ivan took us to the front row to sit.  The host Jami picked on them for eating in the front row.  The comedians were mostly funny.  I wish they told monkey jokes.  But, I don’t think they knew a monkey would be in the audience.  There was an Indian guy who was really good.  Michael was the last comedian to go on.  He was good but he didn’t seem to prepare anything.  He seemed so natural on stage.  We joined Michael and his friends.  They ordered some pizza from a restaurant.  The pizza was a New Orleans style.  I was sad that it wasn’t a banana pizza.  Soho is a lively area filled with young people.

Ivan, Jennifer and I were chilling during the day on October 8, 2008.  I was happy as long as I had some bananas to munch on. 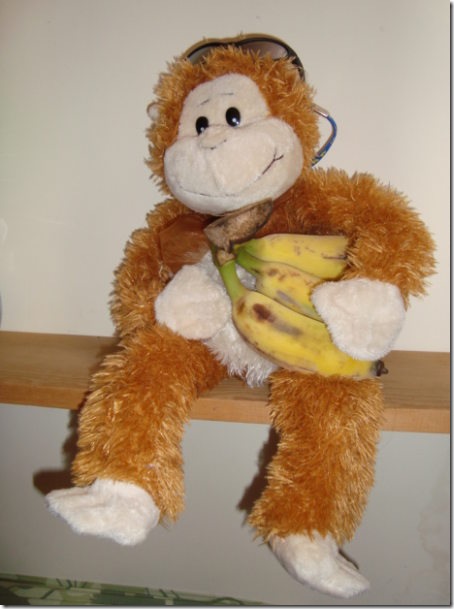 We ventured out into the city and walked around the markets.  The Happy Valley Racecourse was the event for the night.  It’s relatively cheap to get in.  We got tickets for the bottom level which had a beer garden.  The first race hadn’t started yet.

Ivan and Jennifer went to search for food.  We all sat down to enjoy dinner.  I enjoyed my banana crepes.  We went to see the horses.  They show off the horses by letting them walk around a little grass area.  I was going to jump in there and hop on a horse’s back.  I know Jennifer would have scolded me, so I didn’t do it.  I think one of the horse’s said hi to me as he went by us. 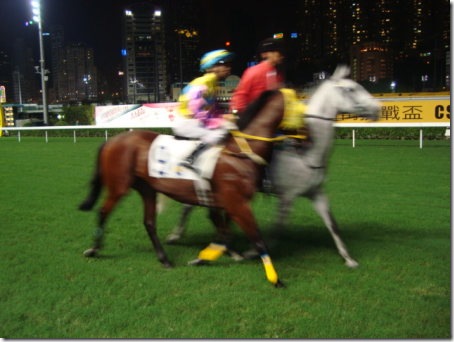 The race went on.  It’s pretty exciting to see the horses race by so fast.  Ivan and Jennifer bet on three games.  I wasn’t allowed to bet since I’m not old enough.  Actually, I’m not sure if monkeys are allowed to bet at all.  I’m positive they wouldn’t accept bananas at the betting counter.  Ivan won one race.  There was few games for Oktoberfest at the racecourse.  Jennifer noticed one called Sawing.  You pay 20 HKD to saw a piece of wood in half.  If you did it in 30 seconds, you’d win a pint of beer.  If you did it in 11-15 seconds, you got 15 pints…. less than 10 seconds, you’d receive 10 pints.  If you did it in less than 5 seconds, you’d get 100 pints.  Ivan thought this was a good game since the beer he purchased earlier was 30 HKD.  So, Ivan gave it a go!  He sawed the wood so fast… in 9 seconds!  He’s so cool.  Ivan won 10 pint vouchers.

If it was bananas offered as the prizes, I would have tried it.  Ivan and Jennifer drank a few free beers.  This was our first time being at the racecourse.  We had a good night.

We left Michael’s place in the afternoon on October 9, 2008.  It was great staying there for 3 nights.  Michael’s a cool guy.  I’m sure Ivan and Jennifer will not miss going up the 10 floors every night.  We ventured  out to Tsim Shaa Tsui (TST as the locals call it).  Ivan wanted to find a hostel to stay at in the infamous Chung King Mansions.  Right when we walked in, an Indian guy approached Ivan about a guesthouse.  Ivan told Jennifer he’d check it out to make sure it was decent.  It was called the Disney Deluxe Guest House.  The room had one bed and a bathroom.  The bathroom was small with the shower inside the same area.  It was actually alright.  It had a powerful fan and even a window.  Ivan had read horror stories about bathrooms being in the same room as the bedroom.  We went to have high tea at R66 in the Hopewell Centre building.  The revolving restaurant is located on the 62nd floor.  It has an awesome view of the city. 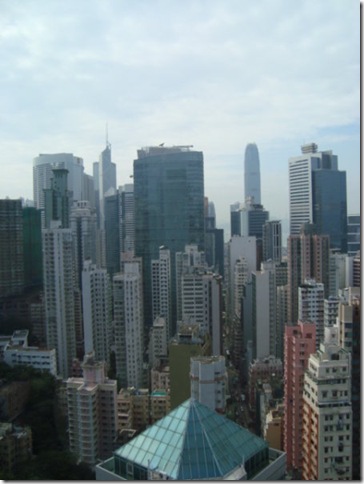 Ivan and Jennifer got tea for two.  It came with slices of cakes, cookies and little sandwiches. 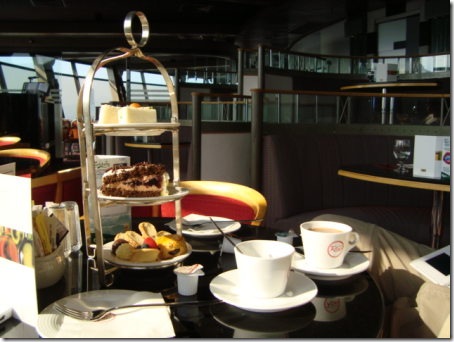 I was disappointed to find no banana cakes in the assortment.  Ivan and Jennifer played Mario Party on the DS.  Jennifer worked on a blog post for awhile.  It was nice having tea in such a great setting.

We took the MTR (subway) to TST and then walked to the Hong Kong Space Museum.  We bought tickets for The Alps which was playing on the Omnimax.  It was a story about this guy who wanted to climb the North face of the Elgier.  His father had died trying to climb it.  So, he wanted to climb it in order to honor his father. The screen was round.  The picture was so big that it felt you were there on the tall mountains.  Ivan, Jennifer and I headed to the Avenue of Stars.  We only caught the end of the Symphony of Lights show.

We strolled down the Avenue of Stars.  It has stars of famous Chinese people in the concrete.  Jennifer wanted to walk down the street to see the Bruce Lee figure.  Of course, it was towards the end of the walk.

It’s always good to get some exercise though.  We walked back towards the Chung King Mansions.

Ivan was hungry.  So, we were looking for a Subway.  Jennifer has been getting tired of Chinese food.  She wanted something different.  There wasn’t a Subway to be found.  We did see a Pizza Hut though.  We went inside and checked out the menu.  The menu was filled with a variety of items like rack of lamb, pasta and soups.  Ivan and Jennifer ordered garlic bread and salmon pancakes for starters.  The were going to share a Fishermen’s Pizza.  I got my own little banana pizza.  It was good, but of course not as good as my dad’s pizzas.  Everybody was now happy and full.  We walked back to the Disney Deluxe Guest House and called it a night.