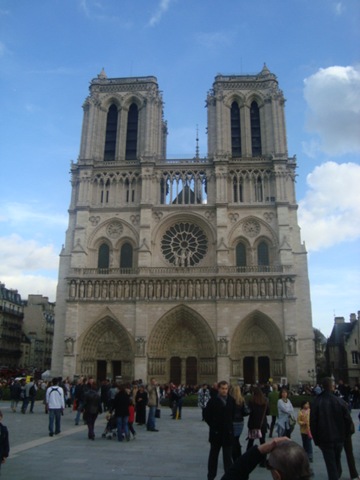 We took a walk on Ille St. Louis Island.  There are lots of quaint shops on the island.  We stopped by a place that has famous ice cream.  I had a nice banana while Ivan and Jen each had chocolate.  It was a small portion on a cone.  Ivan and Jen thought the chocolate was really intense and thick.  We went back for more.  I got banana again.  Ivan and Jennifer each tried the strawberry sorbet.  They loved the strawberry as well.

It was time to walk around the city more.  We went over bridges and down by the Seine River.  We stopped off for a crepe with some cider.

We went to the Eiffel Tower but the lines were way too long.  So, we decided we’d come back the next day.

We took a boat tour down the Seine River.  It was cool to see all the buildings lit up at night. 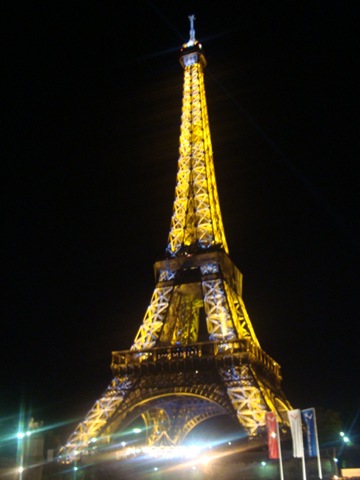 Ivan and Jen had some wine during the boat ride.  They got a bit tipsy. 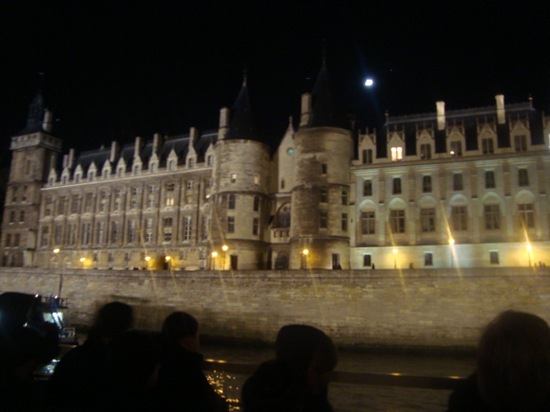 Ivan took some pictures, but most of the pictures didn’t turn out so good.

After the tour, we walked along a street filled with restaurants.  Ivan and Jen chose a Greek and French restaurant called Acropolis.  Ivan and Jen decided to get the set menu.  They started off with onion soup and a salad with goats cheese on bread.  They shared the two main courses of chicken and salmon. 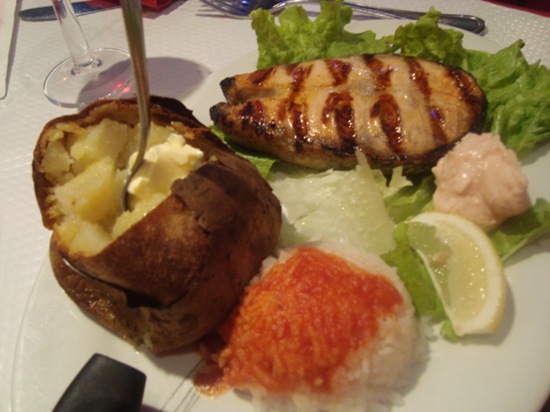 I got a nice mousaka with bananas.  The food was definitely better than last night.  Ivan and Jen shared the creme brulee and a chocolate tart for dessert.  The restaurant was really fun because the waiter was really talkative and excited. 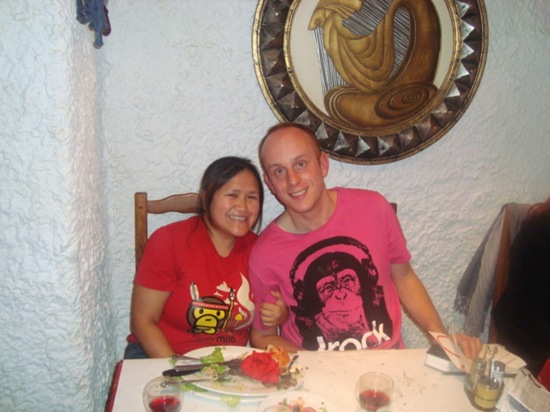 We headed back to the hotel to get some sleep.

Ivan, Jennifer and I went out to get lunch at Sensing Guy Martin on October 27, 2009.   It’s a very posh restaurant that Ivan booked on Toptable for a 50% discount.  It’s pretty fancy inside.  Jennifer felt a little underdressed.  I told her that now she knows how it feels to go around all the time totally naked like I do.

Ivan and Jen started off with a crab dish that looked like it took ages to prepare. 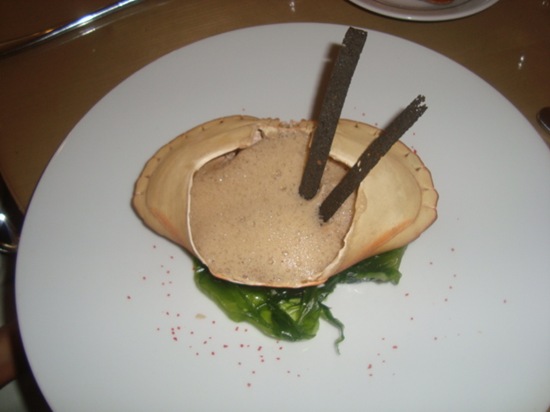 It was an actual crab shell but it had crab meat inside and foam.  It was completely bland.

Ivan and Jen shared the two main courses of cod and a sea bass dish. 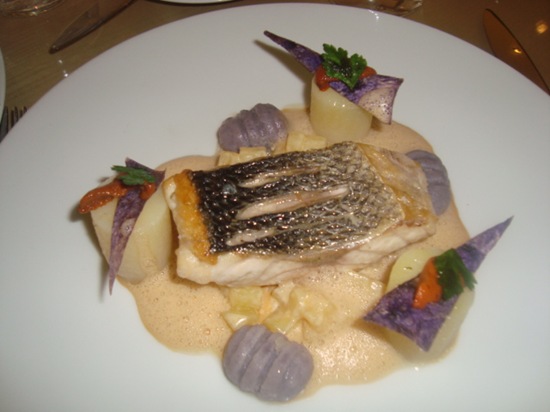 The cod was even worse than the crab dish.  It just had no flavor at all.  The presentation was nice with a jellied octopus on top.  The sea bass was slightly tastier but not anything special – especially with the prices the restaurant was charging.  I had a really plain banana risotto.

Ivan and Jen shared a chocolate tartin.  It was absolutely divine!  They wished that they ordered two.

After lunch, we walked through the park. 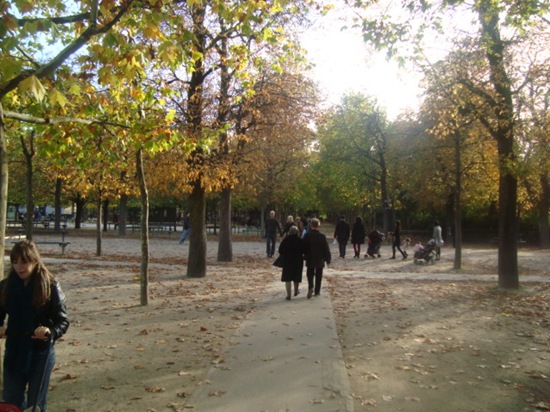 We saw some old men play bowls.  A drunk French guy refused to leave the bowling area.  The other guys were mad that he was eating on the playing area.  The drunk guy threw his false teeth on the ground.  The police were called and they escorted him out of the park.  How funny!

We walked out of the park and went to Pierre Patiserie. 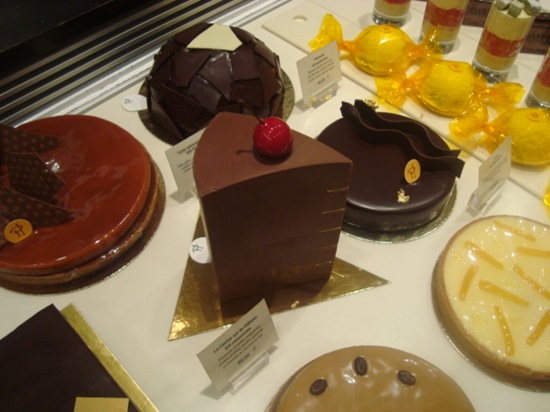 It’s a really posh bakery place.  They’re known for their tasty macaroons.  Ivan bought 6 macaroons for a snack.  Ivan and Jennifer liked the passion fruit and chocolate ones.  I was sad that they didn’t have banana macaroons.

We walked around the city more.  It was nice walking down along the Seine River.  We chilled by the river. 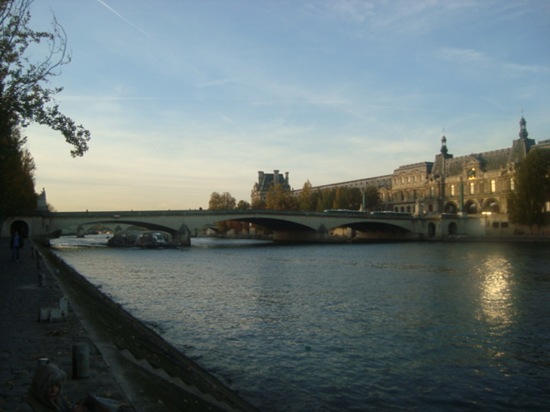 It was time to visit the Eiffel Tower. 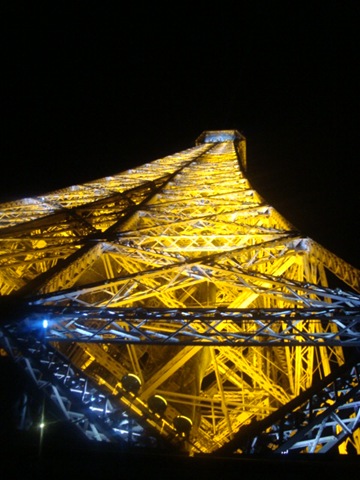 We got in the wrong line.  The other line was longer, so it was alright.  But, Ivan and Jen had to walk up to the second level.  It was a long walk!  Jennifer didn’t like it.  I’m so lucky I can ride on Ivan or Jen’s backs while they do all the hard work!  We got an elevator to the top. 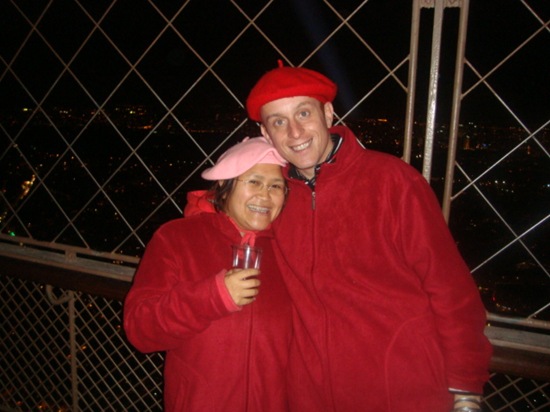 The views were amazing!  It was cold at the top with the wind blowing hard.  Jennifer almost lost her beret since it was so windy.

We went to the restaurant Dans Le Jardin.  We were very late for our reservation.  The waiter wasn’t very happy, but he dealt with it.  We didn’t think the Eiffel Tower would take so long!  Ivan and Jen got the set menu.

For a starter, Ivan and Jen got the gazpacho which tasted average.  The next dish was a tasty goats cheese everrine with figs and salmon.  I had a great banana encrusted chicken dish. 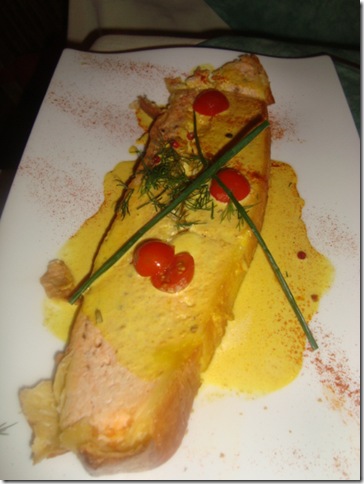 Ivan and Jen shared the crusty salmon pie with tarragon and wheat risotto and trout medallions with tomato.  They really liked their main courses! We were so glad to finally have an awesome French meal in Paris.  Dessert was a selection of cheeses which were scrumptious.  Jennifer didn’t like one of the smelly ones though.  I had a banana cake and it was tasty.  Ivan and Jen also shared the white chocolate and red fruit charlotte.  What a tasty meal!

We headed back to the hotel satisfied.