Ivan, Jennifer and I had Subway for lunch on October 17, 2009.  We chilled at the hostel for the day.

At night, we met up at the Yesterday Bar for the 666 Anti Pub Crawl.  The bar had some great decor.  Our guide was an American lady with dreadlocks.  We waited a few minutes in the bar to wait for other people to arrive.

The group took a train to the Ping Pong bar.  People were playing the game Around the World.  Anybody who wants to play goes around the ping pong table.  Each person must hit the ball – if you miss, you’re out of the game.  So, you keep playing until somebody wins.  Everybody was taking it so seriously – how boring!  Plus, there was no prize for the winner.  The bar was really plain inside.  Ivan played two rounds but he didn’t stay in the game long.

Next, we headed to a goth bar called Last Cathedral.  It had lots of kewl decor inside. 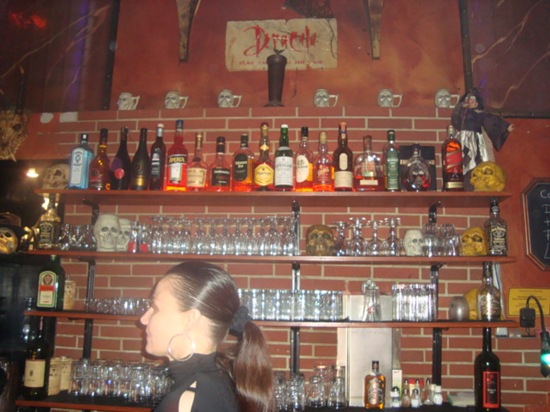 Ivan and Jen each had an Absinthe drink.  I had a nice cold banana juice.  We chilled for a little while.

We went to a gar bar.  It was pink and fluffy inside.  It was far too busy inside though.  We decided to go outside.  Our leader was nice, but she wasn’t very talkative.  She would just tell us what kind of bar we were at, but she didn’t provide any further details.

We were going to head to another bar.  It was stupid because we were recently near there.  We had to take another train there.  So, we weren’t sure why we didn’t go there before.  The tour wasn’t very good.  We did see some kewl bars.  It would have been nice to have a better guide.  We wanted to check out the Panorama bar.  Ivan hailed a taxi.  When we arrived, the line was really long to get in.  We just told the taxi driver to take us back to the hostel.

Ivan, Jennifer and I grabbed a Subway for lunch on October 18, 2009.  We got a taxi to the start of the Alternative Berlin Tour.  We got there a few minutes late.  The group must have left already.  Ivan ran to try to find them.  Thankfully, he found them. 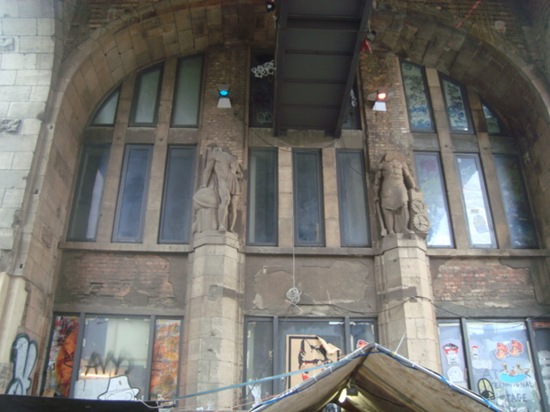 First, we went to an old department store that is now filled with squatters, artists and graffiti artists.  It was an interesting place. 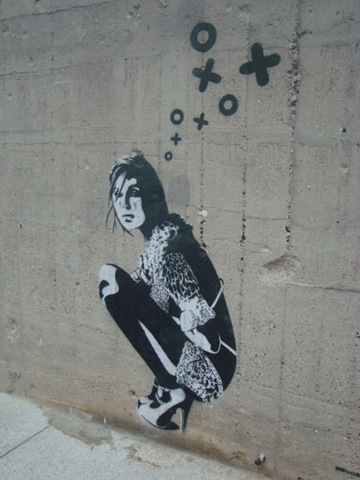 We walked around and checked out lots of graffiti. 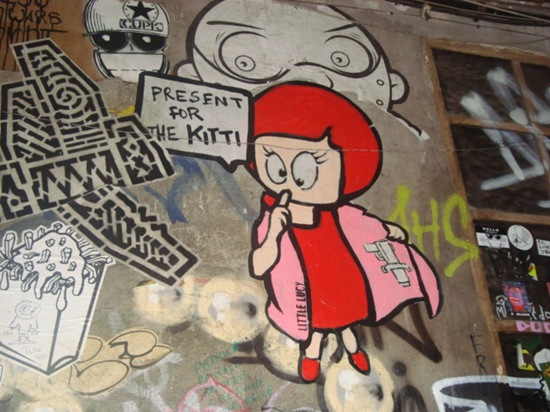 There was another squat house.  It was filled with lots of art, postcards and jewelry.  We had a great tour guide who was very informative.  We enjoyed the tour seeing all the great graffiti and the squat houses where the artists work.

We went to Liquidrom next.  It’s a spa that has steam rooms, pools and a jacuzzi.  The jacuzzi was located outside but it was boiling hot.  Ivan and Jen ran to the jacuzzi and sat there for awhile.  I chilled on a lounge chair and read my Growing Better Bananas book.

Ivan and Jennifer went to check out the Floatation pool.

It’s very dim in this huge room.  There’s lovely electronic music playing.  They both put some floaties under their arms and head.  Then, they put their ears in the water.  They could hear the music playing underwater.  It was really relaxing floating around and listening to the cool music.

Ivan and Jen had an awesome avocado bagel.  I had a great banana bagel.

Ivan and Jen went inside the steam room.  They went in the Floatation pool again.  They got dressed and then we left the spa.

We walked to an Italian restaurant nearby.  Ivan and Jen shared a tomato soup.  It tasted okay.  They also had some wine that wasn’t very good.  I had a baked ziti with bananas.  It wasn’t very flavorful.

Ivan and Jen shared a ravioli and pasta with tubes.  It was very tasteless.

We got a train back to hostel.  We decided to use the internet and then get some sleep.