Ivan, Jennifer and I went to Casa Labra on October 7, 2009.  Ivan and Jen ordered cod croquettes and a glass of wine.  I had banana croquettes.  It was really yummy. 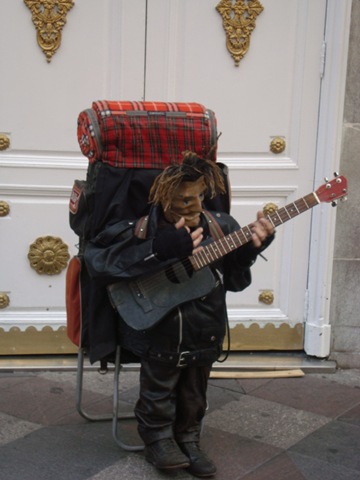 We walked around and did some shopping.

We stopped at Canas y Tapas for lunch.  Ivan and Jennifer were thinking about doing the menu of the day, but it didn’t seem worth it.  Also, there wasn’t much selection for menu of the day.  Ivan had a toastie with tuna and egg. 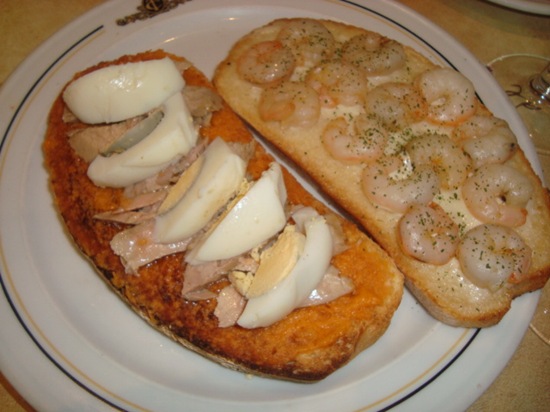 Jennifer got one with prawns.  They also shared a plate of potato bravas. I got a banana and chicken toastie.  The food was average.

We walked to the Prado Museum.  We explored the artwork for an hour and a half.  There was a lot of pictures of Jesus in the museum.

We went to the hotel to chill.

It started raining.  Ivan bought an umbrella.  It was a cold night.  We walked to the Tio Pepe sign.  We were going on a tapas tour called Adventurous Appetites.  We met the guide James at the bear statue.  The other three people were late since they were stuck in traffic.  We waited a few minutes and the three ladies arrived.

The tapas tour was really quite interesting. We got to eat quite a lot of different tasty tapas in many places.

We were sad that we were leaving the next day for Rome – as we would have liked to have visited some of those tapas bars again, because the food we got in them was so tasty!

At the end of the tour the guide suggested that we visit a jazz bar that was nearby. We did just that, walked into a really busy bar, and yet somehow managed to get a table right at the front in the center. The band were amazing..really hardcore jazz with amazing talent shown from all the band. I think we were definitely the only non-locals in there.