Ivan, Jennifer and I had breakfast in the hostel on September 12, 2009.  We checked out of Absolute Backpackers.  We chilled and used the internet at the hostel.

Ivan walked to Woolworths to buy some food for lunch.  Ivan and Jennifer had the tasty salmon and marinated eggplant again.  I had a banana sandwich.

The Oz Experience bus picked us up shortly after 1:30 pm.  We had a small bus and it was filled with mostly girls.

We stopped at a Crocodile farm.  Most of the group went inside, but some people were boring and decided not to do the crocodile farm.  First off, we saw the kangaroos.  We got to feed and pet them. 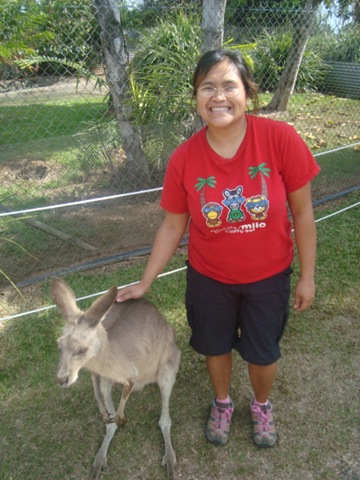 The kangaroos are used to humans.  They’re really cute!

Otherwise, they don’t get food.  They can last months without food.

At the end, people were allowed to hold a baby crocodile.  It’s mouth is taped shut. 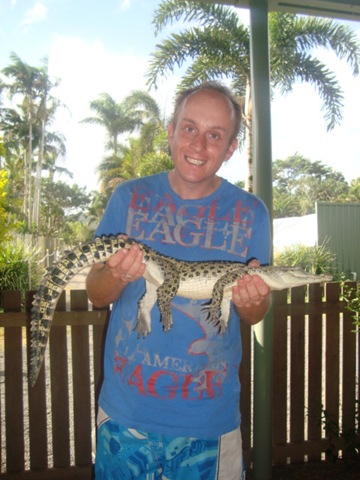 Ivan got to hold it.  Jennifer and I didn’t want to hold the crocodile.  I guess we were a little scared.  Jennifer saw that the tape was a bit unravelled.

We got back on the bus headed to Cairns.  The bus dropped us off at Calypso Inn Backpackers Resort.  We checked in there.

We took the free bus into town that is provided by the hostel.  It was dinnertime, so we walked to Fetta’s Greek Restaurant.  We heard there would be plate smashing.  Ivan and Jennifer started off with three dips: takziki, eggplant and hummus.  Ivan ordered the Mousaka Vegetable. 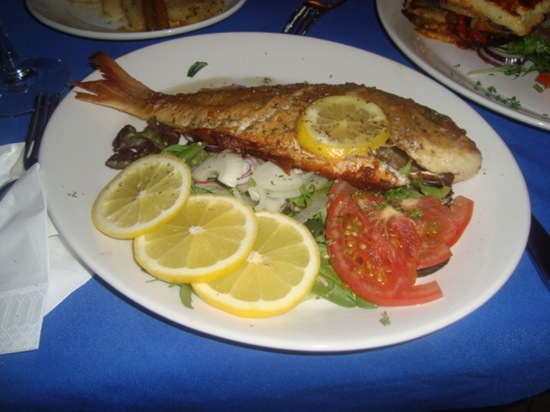 Jennifer got the baby snapper in a lemon sauce.  The snapper had too many bones and not much flavor.  I had a greek salad with bananas.  The food was okay. My bananas were a bit bland – not much banana flavour. A waiter kept smashing plates on the floor.  Ivan and Jennifer wanted to smash them as well.  But, I guess the employees were the only ones allowed to do it.  A belly dancer danced around the room. She was going up to random guys and getting them to dance with her – we all avoided eye contact so that she wouldn’t pick us!

We walked to the Wool Shed Bar.  It was too early, so the place was pretty empty. We got a taxi back to the hostel.

Ivan, Jennifer and I went eat at Perottas at The Gallery on September 13, 2009.  Ivan had the smoked salmon panino.  I had a banana and chicken panino.  Jennifer had a tuna panino.  The paninos were rather small and tasted okay.

We went to Movenpick for ice cream.  Ivan and Jen had some sorbet.  I had banana ice cream.  It was really creamy! 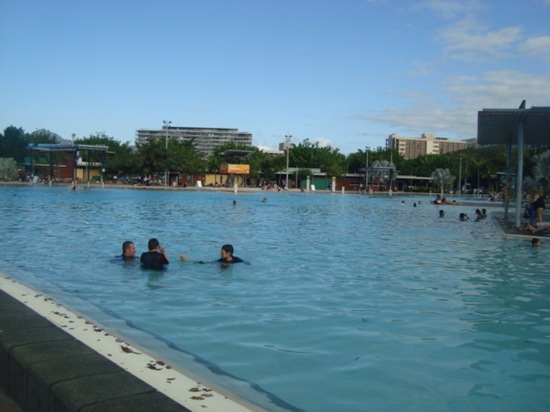 We walked to the lagoon.  We didn’t go in the water since it was an overcast day.  We walked around town and checked out the shops.

We sat in the park area near the lagoon.  There was a reggae band playing.  We read our magazines for awhile.

In the evening, we went to the movie theatre.  I watched Space Chimps on Ivan’s iPod.  Ivan and Jen watched 500 Days of Summer.  They thought it was a good movie.

We went to the Wool Shed Bar for dinner.  Ivan and Jen had a cheap chicken and potato meal.  I had a nice spaghetti dish with bananas.  The bar was having a Blind Date game.  There was a single man and he three girls to choose from.  He couldn’t see what they looked like.  So, he had to decide if he liked them by asking them questions.  It was pretty funny.  There was another game, but this time it was a single girl. 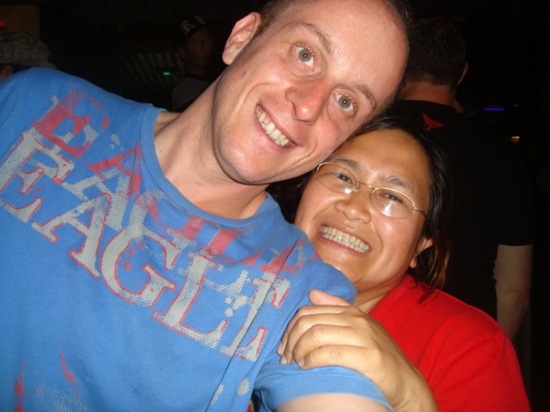 Ivan and Jennifer had lots of wine.  They danced for hours.  The music was really good.  A lot of people were dancing on the tables.

We took a taxi back to the hostel.  Everybody was tired, so we went to sleep.