Ivan, Jennifer and I woke up really early on August 28, 2009. We stored our backpackers in the luggage storage at the hostel, and then met in the car park for our briefing. Our alcohol that we had ordered was nicely stacked for us behind our van, and we noticed that we had the least alcohol out of all the groups – one group was just stupid though, with a ridiculous amount of alcohol that was just way too much.

Although our group had the least alcohol, I would say that it definitely had the most bananas. Probably too many to be honest – but better safe than sorry that’s what I always say!

Everyone helped out with loading the van up, then I volunteered to take a group picture of everyone. 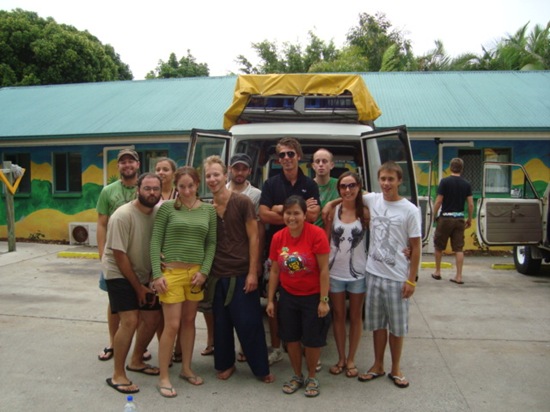 The people who were going to be doing some driving (Ivan but not Jennifer) also got a briefing. Then, we all jumped into the van, with Tony, this French guy driving, and we drove off.

It was a short drive down to the beach where we had to wait for a little while for the ferry to arrive, to take us to Fraser Island. Once we were on the ferry, we were lucky to see dolphins swimming in the water.

The journey was about 20 minutes, and once we arrived the adventure started, with us getting stuck in the sand almost immediately! Still, one of the other teams were also stuck and so we didn’t feel too embarrassed. I offered to get out and push, but that comment was just met with laughs, so instead we waited until Tony the driver skillfully got us out of the sand and on the way.

Due to the high tide we had to drive along an inland road for a while, but then after a while we hit the beach, and the road was just the beach itself.

The weather was perfect and the views were beautiful – we were driving right next to the waters edge! After a while we turned off and started driving through the jungle towards a place called Lake McKenzie. When we arrived we were going to have lunch, but nobody could be bothered to carry all the food down to the lake – so  they said they would skip lunch. However myself, Jennifer and Ivan were hungry so we grabbed some bread, bananas, and a tin of tuna and took it down to the lake with us.

The lake was a fresh water lake right in the middle of the Island and the views were stunning. After eating our lunch we all got in the water, which was freezing cold so we didn’t get too much of our bodies wet – just enough to get a nice photo! 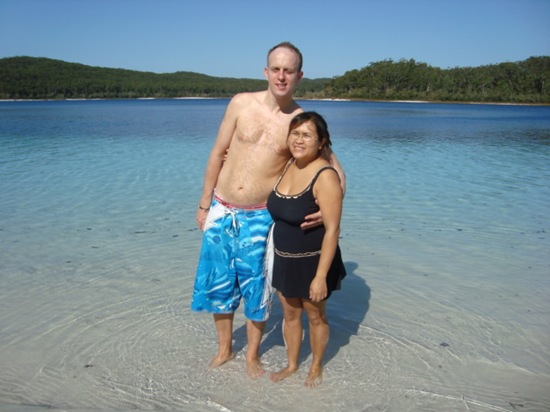 We all sat around for a while and admired the view, and then it was back in the van, with Ivan driving this time.

The driving was quite tough as it was really sandy, and Ivan got stuck a few times, but it was nothing he couldn’t handle. We got a lost a couple of times, and lost track of where the other trucks got too – but luckily once we arrived at the central station to buy some ice, the other trucks also turned up.

After some more driving, we all decided to set up camp, so we found a suitable spot, and started unloading all the stuff from the van. Jennifer and I helped Ivan build the tent. 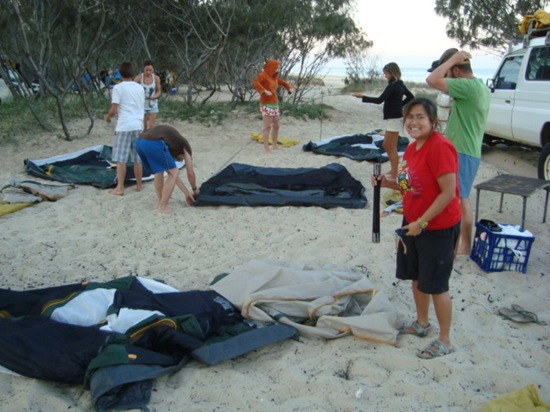 Jennifer’s tent building experience was not too much, so she wasn’t sure what exactly went where – but everyone helped everyone else and so eventually the tents were up.

We then started to cook the dinner for the evening. Jennifer and Ivan helped chop the potatoes up for the potato salad. We only had one small table to cook on – and most of that was taken up by the cooking stove, so it wasn’t long before everything was full of sand, and we were having to improvise quite a bit with the cooking.

Still, the potato salad was a success – and some steak was cooked for the meat eaters, some veggie burgers were done nicely for Ivan and Jen, and some bananas were sautéed in some banana sauce for me.

We were playing drinking games, and everyone was getting very very drunk. It was all a lot of fun, until some people got a bit too drunk……still at least the night was really fun. The less said about what Jennifer does when she is drunk, the better.

The next day on August 29th,2009 Ivan woke up early and made everyone some scrambled eggs. It wasn’t too much of a success though..he thinks he used too much pepper. Still nobody was really complaining as everyone was so hung over.

We all helped clear up the mess, and then pack the van back up again so we could continue our journey along the beach.

After a while driving we stopped at the Maheno wreck. It was an old boat that was washed ashore years and years ago.

We had a look around it and took some pics, then continued our driving.

After a while we came to a point called India Head. The rest of the group went for a walk to the look-out point, but Ivan and Jennifer were too tired to do that, so just sat on the rocks admiring the great view. It was really relaxing. After a while the group came back and we grabbed some lunch in the van – then Jen stayed in the van to get some sleep, while Ivan and I ran after the rest of the group who were heading to a place called the Champagne pools.

It was a long walk to get there. The walk was nice, but once we were there the actual champagne pools weren’t that impressive…just a couple of natural lagoons in the water.

After we walked back to the van, we then drove back down the beach to get a camp site for that night. 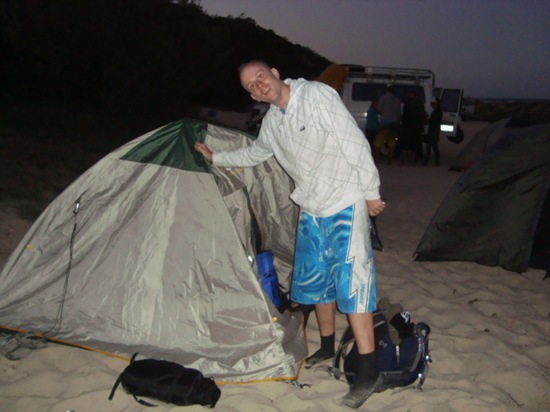 Ivan and a French girl helped cooked the chicken stir fry…and this Idiot French dude decided that it would be a smart idea to cook the rice using ocean water..as we need to add salt to the water anywhere, so he figured to just use salty ocean water. Naturally, the rice was totally ruined…and there wasn’t much stir fry, so after eating it, Ivan cooked some more veggie burgers for everyone to eat.

That night Jennifer didn’t really drink much as she drank so much the night before. She went to bed early, but Ivan got really drunk and stayed up quite late chatting with some people on the beach.

The next day 30th August,2009, we all woke up to a bit of a mess. You see, there are lots of Dingo’s on Fraser Island which are wild dogs – and so we were told not to leave any food out overnight….Well we got up and there was food EVERYWHERE…a lot of it due to the rice fight we had had the previous night. All of our food had sand in it – loads of plates and cutlery was missing…and by the time we had all got up, most of the other groups were already on their way.

Ivan made an omelets for us and we also had some cereal to eat.

Once we had packed up, we drove down the beach, and somehow missed our turn off for the road we had driven down at the start of our trip. We were convinced we were going to miss the ferry back, but luckily we arrived in time and so did all the other teams.

Once back at the hostel we had to wash all our dishes- we were apparently the only group to lose any plates and cutlery. We then had to clean the van and throw all the rubbish away.

Back at the hostel it was nice to have a powerful hot shower waiting for us, as nobody had had a shower for days..I was finding sand in the fur on my body in places that I didn’t know sand could go!

That evening we went to a nice restaurant called Hotel Rainbow Beach. We started off with some really tasty bruschette with fresh garlic, herbs, and oil. It was really really delicious as the garlic was fresh and easily spreadable on the bread.

For main course we ordered a chicken dish and a salmon dish.

It was early to bed for everyone that night as we were all so tired.