We checked out of Su’s Cottages.  We packed everything up.

Ivan got a taxi for us.  We went to the Dynasty Hotel.  We stored our luggage there for the day.  We just said we’re checking in later and that we’ll be back in a few hours.

We walked to Oceans 27.  It was empty as usual.  We were all hungry and decided to order lunch. I had a noodle dish with bananas. Ivan and Jen both got the Nasi Goreng.  We also ordered shakes – banana for me and Ivan, strawberry for Jen.  My noodle dish was alright.  The Nasi Goreng was really plain – just regular rice with raisins.

Thank goodness there was a tomato sauce that came with the bread.  They added the sauce to the Nasi Goreng and it tasted better. It was a really expensive Nasi Goreng, but then I guess that’s what you would expect from a fancy beach club.

We chilled at Oceans 27.  It’s great sitting there since you’re in the shade (from the umbrella).  You just have to order $5 per person to use their pool.  Ivan and Jen went in the pool.  They were reading the magazines they had bought yesterday.

Ivan tried to fly the dragon kite again.  There was a man selling kites.  He said that the head of the kite was making it difficult to fly. 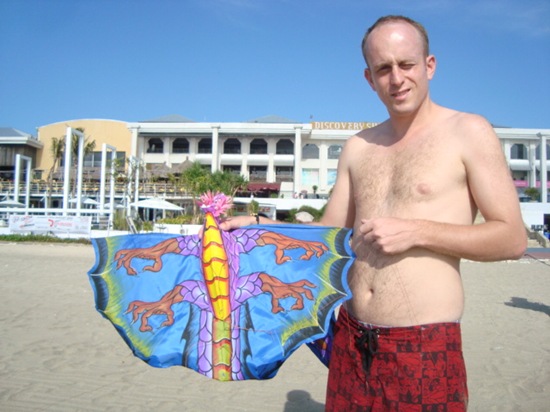 I guess we should have gotten a plain kite.  It did go in the air, but not  for very long.  It really was a kewl kite though.

We walked to Queens of India for dinner.  Ivan and Jennifer ordered the masala papadums to start off with.  The papadums come with three sauces.  This time the sauces weren’t just in the small tin container, but in the sauces were in a bag.  Ivan asked why he had to pour the sauces into the container.  The server said that somebody complained that it wasn’t hygienic.  He was basically saying that the restaurant could have re-used the sauces.  That’s just stupid!  Restaurants wouldn’t do that.  I don’t think they will continue putting it in the packets.  It’s an inconvenience to the customers.  I got the awesome mint bananas.  Ivan and Jen shared the mint chicken and the kashmiri chicken curry.  It was great food like last time.

We got our backpacks from the Dynasty Hotel.  We hopped into a taxi headed towards the airport.  We were flying to Kuala Lumpur (KL).  The flight was delayed an hour.  We arrived close to midnight.

When we got there, we were thermally scanned for the swine flu.  They asked Ivan and Jennifer for a mobile phone number or a number back home.  They said they don’t have one.  What would it matter if they gave a home number.  It’s not like they can contact them anytime soon since we’re traveling for awhile.  Ivan and Jen wrote down an e-mail address.

We took a taxi to the hotel.  We checked in to the Swiss Inn.  It was time for some food.  Ivan and Jen grabbed a cup of noodles for each of them at a store nearby.  I had two bananas.  Soon after, we got some rest.

We got a taxi to Sungei Wang mall.  We shopped for new clothes – well, Jen and Ivan, I don’t wear any clothes since I’m a monkey and monkeys are okay with being naked all the time.  We all used the internet in a cafe.

We walked to the Pavilion Mall.  We were meeting couchsurfers for a meetup.  We arrived around 7 pm. 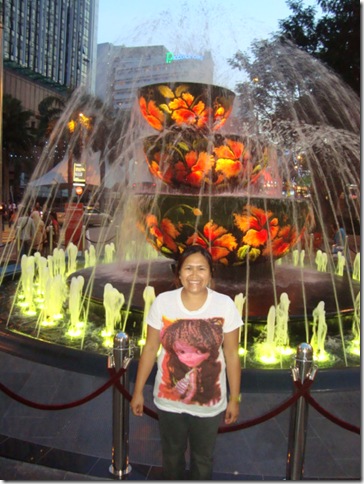 There was about 40 people total there.  We couldn’t believe that so many people showed up!  Our buddy, Dimas from Bandung was there.  Also, a girl we met from Singapore was there as well.  We met her with Ily at a bar.  It was time for dinner.  At 8 pm, we walked to a restaurant.

Everybody sat down in a room toward the back in the Nagasari Curry House.  The menu had Indian and Asian foods.  Ivan ordered the Pad Thai.

Jennifer got the Spicy Chicken and Rice.  I got the Rice with Bananas.  Considering that about 35 people ordered, the food came pretty fast.  We had our dishes 30 minutes after we ordered it.  The food tasted great too!

Some of the couchsurfers wanted to go chill at a bar.  Only a few people made it to a bar nearby.  I can’t remember what the name was.  It was really smoky in there though.  That’s annoying!  Ivan and Jen each had a glass of red wine.  We met a guy who is a media activist.  Ivan and Jen weren’t sure what that was and asked him to explain.  He handed his business card to them.  It says

“Building capability for the use of electronic media technologies by southeast Asia independent media and civil society organizations towards the enhancement of press freedom, democracy and human rights”

Ivan and Jen got even more confused by that.  I’m sure the glass of red wine didn’t help!  The guy Sean said that he teaches people how to overthrow the government.  Jennifer said Couldn’t you get arrested from that?  Sean said that he couldn’t go to Vietnam.  Wow, it’s not everyday that you meet a media activist.  We chilled for awhile talking to people.  Then, we got a taxi back to the Swiss Inn.