Ivan and Jennifer had the free breakfast at the hotel on July 21, 2009.  I had some of Ivan’s banana pancake.

We boarded the boat and got a good seat.  It was a glass bottom boat.  I could see the fish in the water.  It was really cool!

Our first stop, Ivan and Jennifer went snorkeling.  It was off the coast of Gili Menos.  They saw some fish, but not really that many.  The water is always cold when you get in, but you get used to it.  Jennifer got stung by some jellyfish.  I just stayed on the boat and watched the fish in the glass.  It’s great to be able to see into the water without actually going snorkeling or diving.

The next stop was Turtle Island.  Ivan and Jen snorkeled off the coast of that island.  The current was really strong.  So, Ivan and Jennifer strayed from the boat and they had to swim back to the boat.  This time they were following one of the guides so they could see the turtles.  Ivan and Jennifer saw two turtles in the water. They were really big!

We went to Gili Air.  Jennifer was too tired to go snorkeling.  Ivan went into the water.  He saw lots more fish this time.  He also saw clams while following the guide.  Ivan came back on the boat.  We drove to Gili Air to get some lunch. 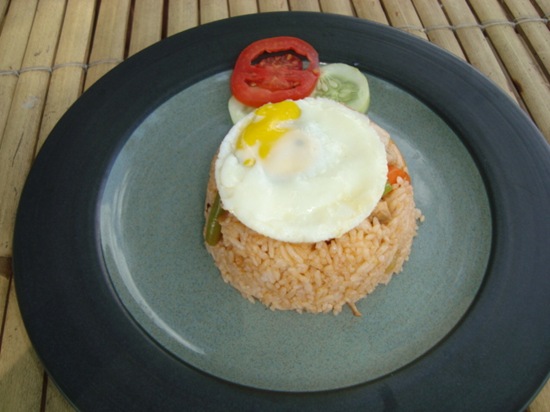 Ivan and Jennifer both ordered Fried Rice.  I got the same but with bananas.  It was good. 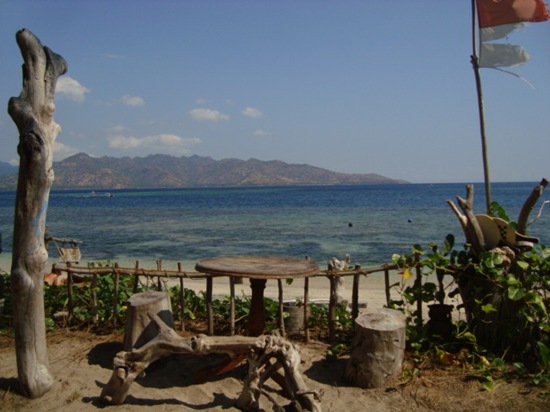 We got some gelato from Gili Gelato.  Ivan and Jennifer both got Mixed Berry.  I got a Banana Gelato on a cone.  It was tasty.

We chilled in the hotel for awhile.

We had dinner at Tir Na Nog.  Jennifer wanted pizza for dinner.  The restaurant was packed.  Ivan and Jennifer ordered pizzas – Ivan got the tuna while Jennifer got the chicken.  I decided on the banana pizza.  We started watching the rest of Harry Potter and the Goblet of Fire.  The pizza had still not come after 45 minutes.  Ivan was going to leave if it didn’t come soon.  It arrived a minute before 50 minutes had passed.

It finally came and we asked the guy what took so long.  He said I should have told you it can take awhile.  He said what do you want it for free?  Jennifer said yes, it should be.  He said you would have to talk to my manager.  Ivan and Jen said Alright then.  We wolfed down our pizzas – since we were so hungry and tired of waiting for so long.  The server came back and said that the pizzas were free.  We were happy about that.  When we were leaving, the server said there’s a free tuna for you tomorrow night.

We walked around the island to get some exercise.  Then, we used the internet for awhile.  Then, it was back to the hotel for some rest.

Ivan, Jennifer and I had lunch at the Horizontal Bar and Restaurant on July 22, 2009.  Ivan ordered the Thai Noodles while Jennifer got the Indonesian noodles. 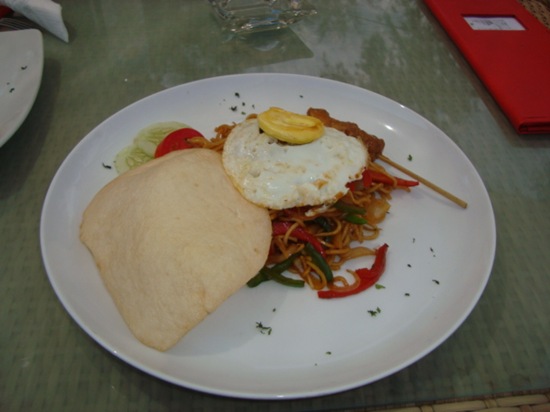 I had the Nasi Goreng with Bananas.  The dishes were small but tasted alright.

We chilled on the lounge cushions on the beach.  Ivan and Jennifer  read their books.  I took a nice monkey nap.  They went into the water.  The waves were calmer than the other day. 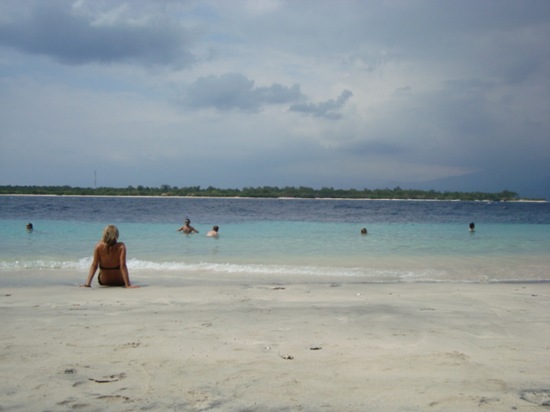 It was really hot out.  It was more bearable when the sun was hidden from the clouds.

Ivan was getting hungry.  We went to Illy’s for tea. 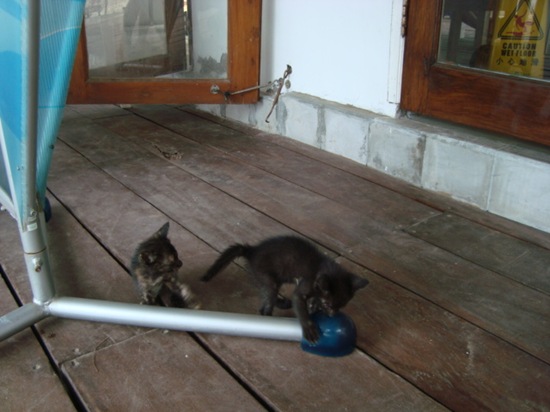 They have a mama cat with four newborn kittens there.  They’re so cute!  Ivan ordered an Early Grey tea.  I had a banana tea.  Jennifer got the Jasmine Green Tea.  Ivan got a muesli with yogurt and fruit.  Jennifer got a spicy marlin salad, which wasn’t spicy at all.  The food was good.

We used the internet at the cafe for awhile.

We decided to have dinner at Scallywags Resort.  They have the BBQ dishes available with rice, french fries or baked potato available.  It also comes with the free salad bar as well just like the Beach House Resort.  Ivan ordered the BBQ Snapper.  Jennifer got the BBQ chicken kebab. 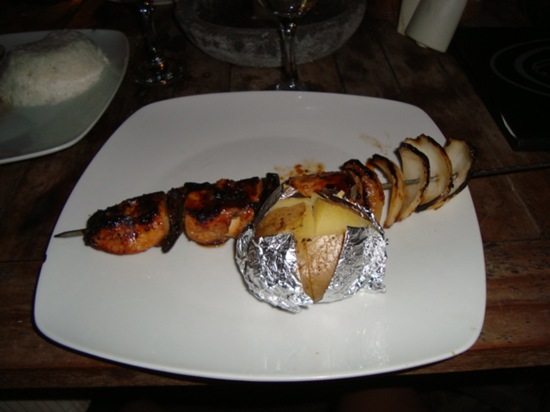 I got a BBQ chicken and banana kebab.  The food tasted great with lots of flavor.  The salad bar had cous cous, salad with red onions and artichokes and bread.  Ivan and Jennifer were still a little hungry – so they decided to get dessert.  They went with the brownie with mint ice cream.  They loved it. 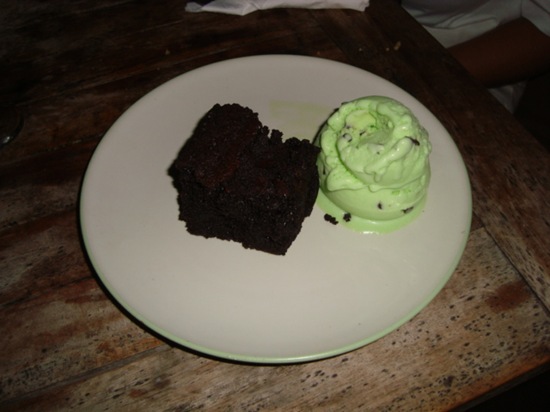 It was the best brownie they’ve ever had – moist in the inside and crunchy on top.  The mint ice cream went perfectly with the brownie.

We walked around the island to get some exercise.  There was a really good band playing at Ombak Resort.  We only heard a couple songs.  They stopped playing at 10 pm.  The band plays from 7-10 pm.  We walked back to the hotel to catch some Z’s.