Ivan and Jennifer had the free breakfast in the hotel on July 5, 2009.  It wasn’t much though.

We checked out of Pradha Guesthouse.

We checked in at Lumbung Sari Guesthouse.  We placed our backpacks into the room.

We drove to Three Monkeys restaurant for lunch.  Ivan had the tasty Watermelon Mint Juice.  Jennifer had a juice with pineapple, coconut, and banana.  I had a banana juice with extra bananas.  Ivan and Jennifer started off with the delicious pumpkin mint soup. 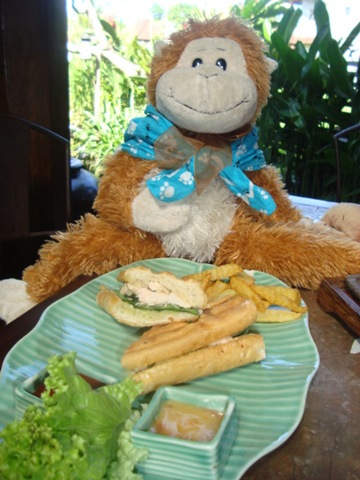 I ordered a chicken and banana panini.  Ivan had the spinach ravioli.  Jennifer got the ginger chicken panini.  There’s a small pool on the side of the restaurant. 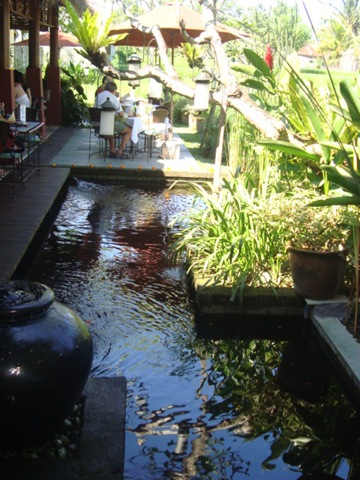 The meal was small but tasted alright.

Ivan and Jennifer used the internet after the meal.  I walked to the Monkey Forest to meet up with the monkeys.  I brought a few bunches of bananas.  There was a special monkey ceremony happening that night.  We had to have lots of bananas to offer to the Monkey Gods.  I wish I could have brought a camera to the ceremony. It was interesting to see their traditional ceremony.  Although, they actually don’t allow cameras during the ceremony – I’m sure I could have snuck in a picture or two.  After the ceremony, there was a big feast of banana dishes with rice, watermelon, coconuts, and soups….and bananas. Then, the monkeys performed some dances for entertainment.  It was quite a good night!

Ivan and Jennifer went to Nomad for dinner.  One of the servers said Welcome Back to them.  They were now regulars at Nomad.  The restaurant started doing a new thing – a Welcome Dish.  Today, it was a pumpkin soup which was alright but not much pumpkin flavor.  They ordered a bottle of the lovely Hatten Rose to drink.  Ivan and Jen started off with the smoked marlin salad.  It took a long time to come.  I think they forgot about it.  It wasn’t as big as previous visits.  I think they were running low on dressing and smoked marlin since there wasn’t much fish or dressing.  Ivan got the tuna fillet steak.

Jennifer got the Grilled King Prawn BBQ.  Jennifer’s potatoes were really good – but the four prawns were rather plain.  This is the only dish so far that hasn’t been really good.  Ivan and Jennifer were still hungry and decided to get dessert. 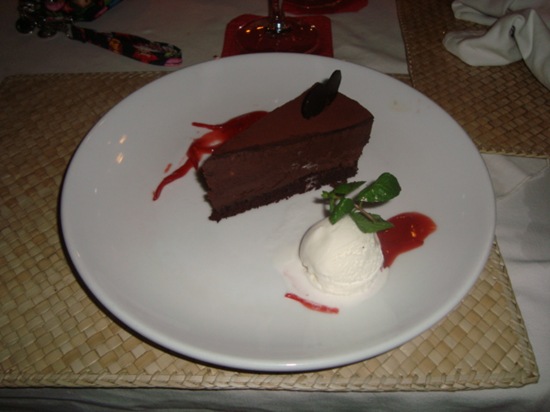 They got the Chocolate Mousse Cake.  It was heavenly!  Mr. Nomad was at the restaurant.  Jennifer told him that they loved the food.

Mr. Nomad really does look like a traveling nomad.

Ivan wanted to watch the Finals of the Wimbledon tennis tournament.  Ivan thought of a bar near the guesthouse.  They went to Lombong Cafe.  Wimbledon was playing on the tv and there was also a great reggae band on.  Jennifer was slightly buzzed.  The match was really close between Federer and Roddick.  Jennifer made a bet with Ivan that Roddick would win.  Ivan said okay and said 50,000 IDR ($5 USD).  They shook on it. 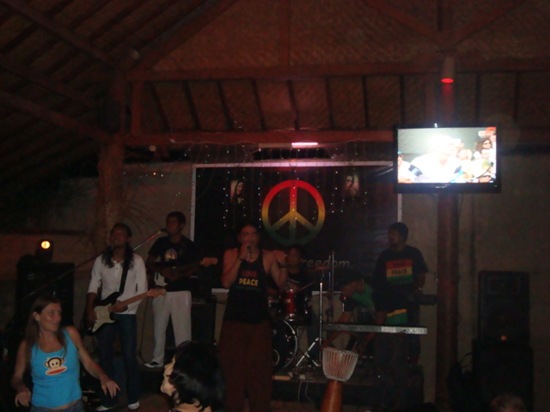 The band played good songs like Every Breath You Take by The Police, I Got You Babe by Sonny and Cher, and a UB40 song.  Ivan and Jennifer watched the game for a while.  Then, they were tired and decided to head back to the guesthouse to get sleep.

Ivan and Jennifer had the free breakfast at the guesthouse on July 6, 2009.  I had a banana with some toast.  I sipped some of Jennifer’s banana juice.

We decided to go white water rafting today.  We had it set up for the next day, but we wanted to do the jewelry-making class tomorrow since it starts early.  Ivan got a smoked marlin sandwich from Casa Luna to eat on the way to the Ayung River.

We got picked up at 1 pm.  We were driving up for a long time in the car.  Ivan and Jennifer shared the sandwich in the car.  I had two bananas.

We arrived at the Bahama Adventure place.  We got our life vests, helmets, and paddle.  I didn’t get a paddle since I’m a monkey and monkeys don’t paddle very fast.  We had to walk down to the river. 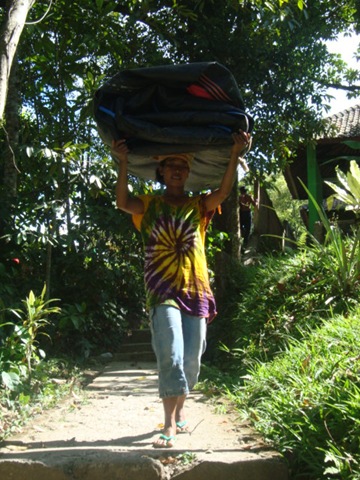 A lady brought the boat on her head.  Her head must be very strong.  The ladies carry anything on their heads.  We saw a lady on the street carrying a big table.  It was a long walk down.  I’m glad I didn’t have to walk it – I was riding on Jennifer’s shoulders.

We were the only ones white water rafting with our guide.  They were still filing up the boat with air when we arrived by the Ayung River.

We hopped into the boat and started paddling. 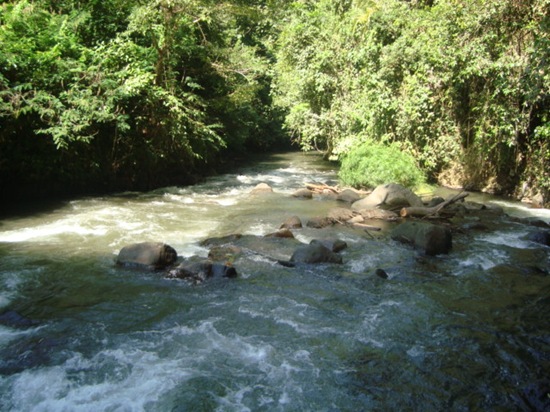 The River Category is II to III.  There’s some carved stone on the left side of the river. 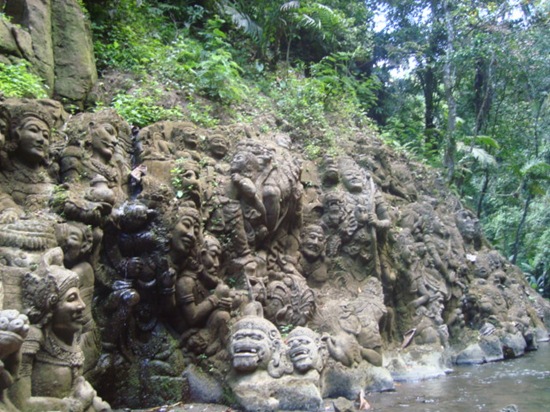 The scenery is really beautiful.  There’s greenery everywhere.  We also passed by lots of waterfalls – mostly small ones and a big one. 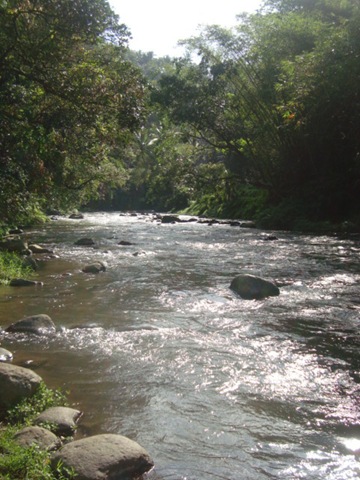 We stopped at a place for a coconut.  Ivan also got water and bought a Bitang for our guide.

Ivan didn’t want the guide too drunk since we still had a long way to go. 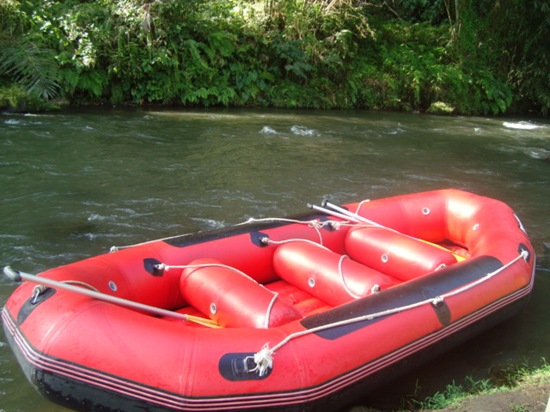 We got back on the boat and took off.  It’s good that we don’t go too fast, otherwise, you might miss the awesome surroundings.

We went rafting for 2 hours.  It was the end of our ride.  We had to walk up the steps.  Jennifer was so tired.  She doesn’t like walking a lot since her ankles hurt sometimes.

It was time for the lunch buffet.  Ivan and Jennifer had noodles, fish curry, and chicken.  I had some bananas with the rice.  We really needed that late lunch.  We were all very tired.

The car drove us back to the guesthouse.  We rested for an hour.

Ivan drove us to Nomad for dinner.  We each got a flower for our hair when we walked into the restaurant. 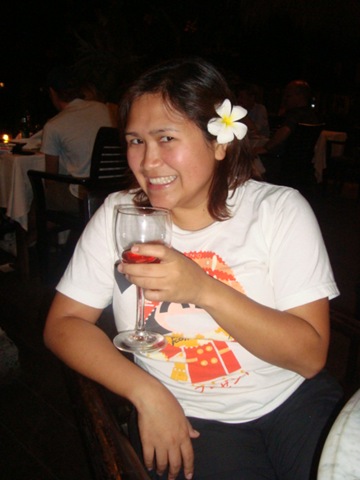 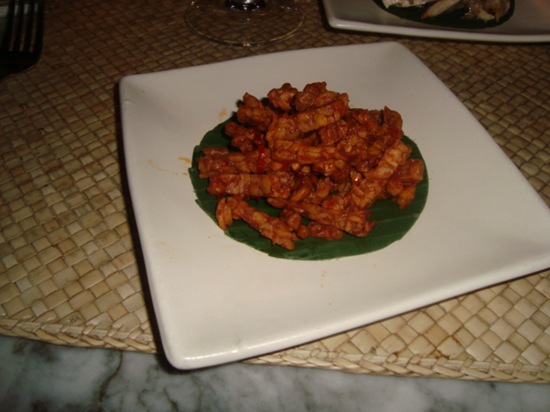 The tempe was quite good.  I had the tagliatelle with bananas, onions, and chicken.

Jennifer got the delectable tuna fillet steak.  Ivan got the pumpkin ravioli.  It was another great meal at Nomad.